EASTENDERS star Lacey Turner says she "ignored" being pregnant for 14 weeks over fears she would miscarry for a third time.

The Sun Online revealed the actress was left feeling on edge when doctors failed to explain why she had lost two unborn babies - both at seven weeks old.

Today on Loose Women she raised awareness about the emotional trauma of miscarriage.

"I put so much pressure on myself to fall pregnant that it wasn't happening," said Lacey, 31.

"But as soon as we'd said that we fell pregnant.

"When the pregnancy test said positive, I told him not to get excited and I felt horrible telling him that.

"I ignored it until I was 14 weeks. I carried on eating all the things you shouldn't eat.

"But it took until I was 25 weeks for me to believe, maybe she's going to stay. I was so scared."

She then insisted on getting a weekly scan to check on the baby as she naturally worried history would repeat itself.

But thankfully it was third time lucky for the 31-year-old, who gave birth to a healthy baby girl called Dusty in July 2019.


Vote for your Fabulous Mum of the Year and WIN

DO you know a mum who deserves some extra recognition?

Whether she’s overcome adversity, dedicates her life to help children in need, works long hours to support her family or is just an all-round supermum, we want to hear your stories.

Nominate her for our Fabulous Mum Of The Year Award and she could win an overnight stay for two at a Champneys spa of her choice complete with a Bronze treatment package, which includes a full-body exfoliation and cocoon wrap.

Two runners-up will take home goodie bags worth hundreds of pounds including an afternoon tea with bubbles thanks to Buyagift, plus all three will have a makeover and appear in a gorgeous Fabulous magazine shoot.

Meanwhile, you could win a Samsung TV worth £499 or fashion vouchers for £100 or £50 from Next, Marks & Spencer, F&F at Tesco and George at Asda simply for nominating her!

If you want to nominate a mum then fill in the form here.

To enter, upload a photograph of the mum you are nominating and explain why they deserve to win.

The deadline for entries is Sunday, February 23, and one winner and two runners-up will be announced on Sunday, March 22. Good luck – we can’t wait to hear from you!

Celebrating Fabulous's Mum of the Year competition, Lacey told The Sun Online: "I found pregnancy quite difficult as I couldn’t allow myself to be excited because of previous experiences, so it seemed very long.

"I was fascinated with my body and the changes it made and how incredible it is, but I also found the adjustments very hard at times especially towards the end."

Lacey is currently on maternity leave from her role on the BBC One soap.

She has played feisty Stacey Fowler on the BBC One show since 2004 - but Lacey insists being a mum is the toughest role she's ever had.

"Being a mother is by far the hardest job I have ever done in my life," she said.

"But it's also the best thing in the world.

"It has changed me because it makes you see everything differently.

"It highlights what’s important and what isn’t! I think I’m much more chilled out now I’m a mother.

"Somehow we manage to juggle everything and everyone and yet we still feel guilty for certain things. 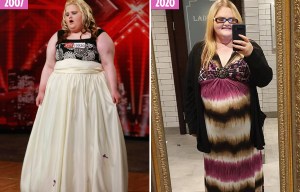 "I think until you have done it you can’t understand how challenging it is yet so rewarding."

Lacey's troubled character on EastEnders, Stacey is going through a rough time and is in hiding after she fled Albert Square to escape Phil Mitchell - who she attacked with a spanner.

Stacey left him for dead after finding him choking her husband Martin in the Arches.

Fans are desperate for her return, but Lacey says she is enjoying the time she's got at home with her baby Dusty and husband Matt Kay for now.

"I think it will be hard to go back to work as much as I’m looking forward to working again," she admits.

"I will miss Dusty because you get so used to spending all day every day together. She’s great company."