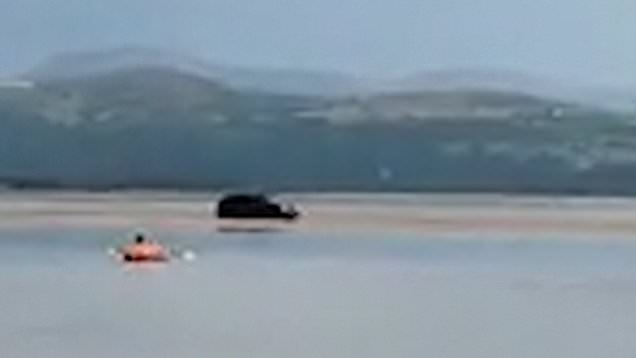 A 4×4 was almost completely submerged underwater after a driver ‘ignored warnings’ against parking in a dangerous spot on a Welsh beach.

Footage shows the moment the motorist desperately tried to evacuate the area after being left stuck on a sandbank when the tide came in on Black Rock Sands in Morfa Bychan.

The black car turned toward the waves as the owner tried to stop it toppling over while shocked locals looked on.

Ed Williams, who recorded the video, was heard saying: ‘Is he going to make a dash for it? What is he doing?’

The vehicle is then filmed accelerating into the water before it starts to sink.

It was almost completely underwater by 11pm, according to a local business owner.

The driver was allegedly cautioned ‘several times’ beforehand of the risks of the area, which is in Gwynedd.

Mr Williams, who owns a caravan site nearby, told North Wales Live the driver ‘was advised to abandon it but he took it upon himself to try and get across but it didn’t work’.

He continued: ‘He was offered help and advice before he went for it on his own accord. He was actually in a place where he shouldn’t have been.

‘There are lots of signs warning people of soft sand but some 4x4s take it upon themselves to risk it. It was a rebound spot for the tide coming around you.

’It’s usually swimmers that get caught out on this particular sandbank. He was told to move but left it too late.’

MORE : All four people onboard dead after helicopter crashes out of sky