Matt Hancock has warned people in England not to “blow it" as lockdown measures succeed in bringing coronavirus under control. “We’re on the route out,” he told a Downing Street briefing.

It came as the government announced more than 4 million people had now been inoculated, with half of over-80s having received their first dose. Ten new mass vaccination centres opened around England today as the over-70s and extremely vulnerable people began to receive invitations for Covid-19 jabs.

Meanwhile, the UK now has the highest death rate from coronavirus of any country in the world, the latest data shows.

Good morning and welcome to The Independent’s live coverage of pandemic news today.

Covid vaccinations to begin for over-70s and extremely vulnerable

Over-70s and extremely vulnerable people will begin receiving invitations for coronavirus jabs this week in what Boris Johnson called a “significant milestone” in the UK’s vaccination programme.

Covid-19 vaccines will be rolled out to the third and fourth priority groups from today at vaccination sites with the necessary capacity.

The government said it would continue to prioritise the first two priority groups — care home residents and their carers, and over-80s, frontline health and social care workers - which have received 3.8 million jabs so far.

My colleague Conrad Duncan has the full story: 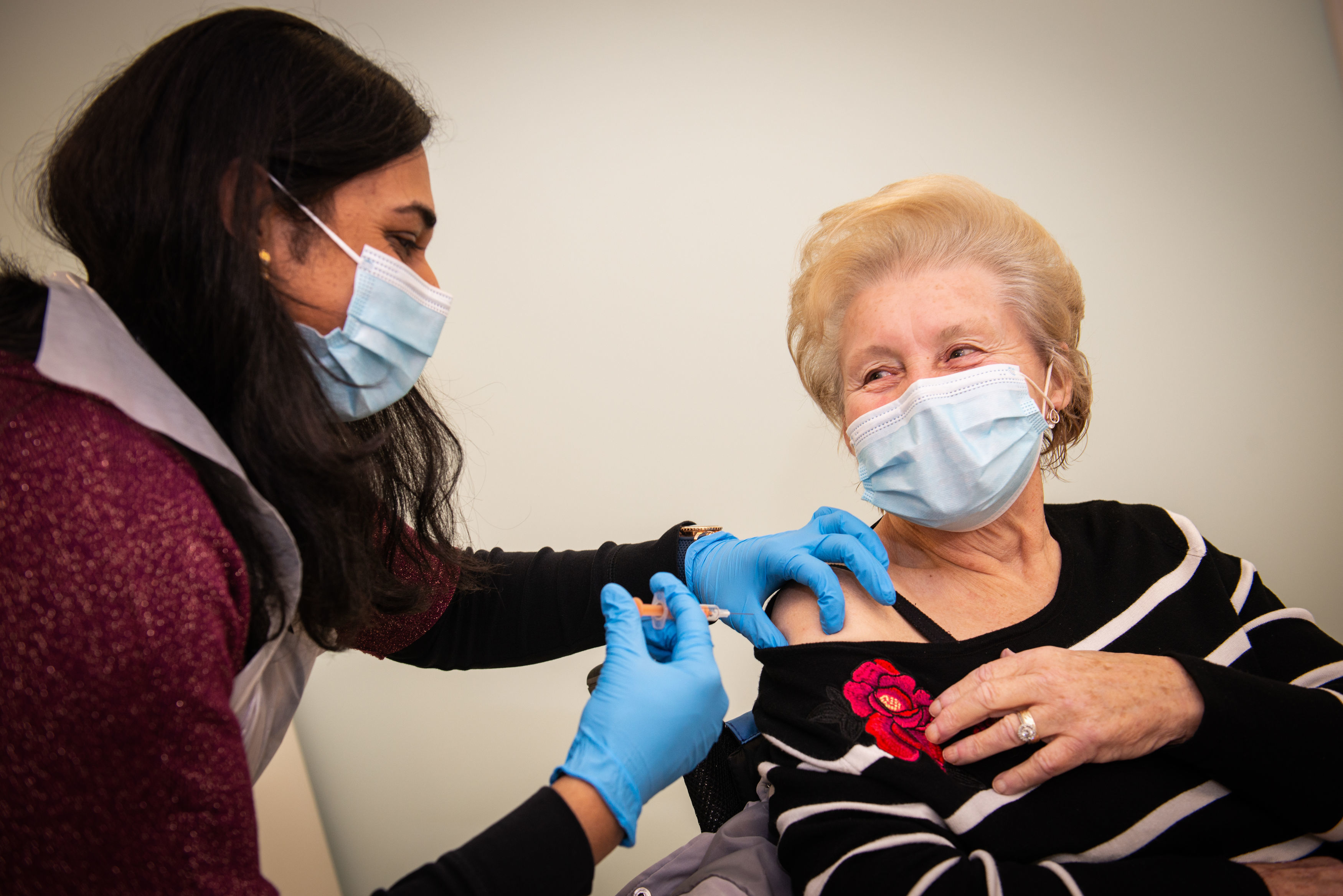 The UK closed all travel corridors today meaning anyone heading to the UK from overseas will need to provide a negative coronavirus test taken within the past three days before departure.

Those who are permitted to reach the UK must quarantine on arrival for 10 days.

The tough border rules came into force at 4am today and are set to stay in place until at least 15 February. Last Friday, a ban on travellers from South Africa and Portugal was implemented in an attempt to shield the UK from new variants of the virus, including one identified in Brazil.

Pilot for 24-hour vaccinations by end of January, says minister

Nadhim Zahawi, the government’s vaccines minister, said 24-hour vaccinations will be piloted in London hospitals by the end of January.

Pressed for when the pilots will start, he said: "By the end of January, absolutely."

The toughest travel rules in a lifetime for arrivals into the UK have now come into effect.

Anyone hoping to travel to the UK from a foreign country (except Ireland), by air, rail or sea must present a negative Covid test taken within the past three days.

Vaccine will not impact death rate or hospital admissions for some time, says NHS boss

Infection rates in London had slowed but the rest of the country has not seen as significant a slowdown since the new lockdown came into effect, Professor Stephen Powis told Good Morning Britain.

But he suggested there were “early signs” the lockdown had begun to take effect, though he added it will be a week or two before this begins to take pressure off hospitals.

"For the next few weeks and into February, it's really important that everybody sticks to those social distancing guidelines," he said.

"The vaccine programme gives us hope, but it's not going to impact on deaths or hospital admissions until well into February."

Nadhim Zahawi, the vaccines minister, suggested the easing of lockdown restrictions will not begin before March.

He said there were a number of things that stand in the way of "reopening the economy" and reiterated a remark from deputy chief medical officer Jonathan Van-Tam saying we do not yet know the "impact of the vaccine on transmission rates".

Any reopening will be gradual, Mr Zahawi told BBC Breakfast, and "probably" will employ the tier system but should not be expected to begin until "two to three weeks after the middle of February" by when the government aims to have vaccinated the top four priority groups.

As the UK’s test-before-travel scheme took effect, passengers have been turned away from a transatlantic flight because the airline did not regard their negative Covid tests as sufficiently high standard, travel correspondent Simon Calder reports.

Hannah Holland, a 23-year-old British woman from Sheffield, was booked to travel on American Airlines (AA) from Philadelphia via Chicago’s O’Hare airport to London Heathrow.

It was the first departure of flight AA86 for which passengers were required to present proof of a negative coronavirus test before being allowed on board.

Exclusive: ‘My daughter was in tears begging to be let on the plane’

Nadhim Zahawi said he thinks those who are exposed to the virus through work should be prioritised in the second phase of the vaccine rollout.

“When we enter phase two, we will work with the Joint Committee [on Vaccination and Immunisation] to look at the priority," he told Good Morning Britain.

“My instinct is that anyone who, through no fault of their own, has to come into contact with the virus in much greater volume and probability should be protected - teachers, policemen and women, shop workers, all those who need that additional protection.

“Now, some of them will be captured in the top nine categories anyway if they are clinically vulnerable, for example, or in that age group of the over-50s which are in category nine, effectively.

“But phase two — of course we'll be guided by the [Joint Committee] — but my instinct is that if you work in a job, a shop worker, policemen or women, any other profession which brings you into contact with the virus unfairly, then I think you should be prioritised.”

Zahawi was asked about the vaccine rollout on Good Morning Britain

All eligible care home residents in Newcastle and most of the staff looking after them have received the coronavirus vaccine, the doctor leading the project has said.

The programme saw seven teams made up of a doctor, nurse and administrator going to each of more than 50 care homes in the city, working with care staff to vaccinate almost 2,000 residents in less than a fortnight.

Dr Jane Carman said none of the residents refused to have the jab, telling the BBC’s Today programme: “Everybody was delighted to have it.”

Rebecca Haynes, chief operating officer from Newcastle GP Services, said it was "an absolute privilege" to have protected the most vulnerable so swiftly, adding: “We would like to thank every care home, member of staff, GP, nurse, volunteer and resident who has played a critical role in this vaccination programme.

“We are not out of the woods yet and I would urge people to follow the guidance in full, stay at home unless essential and help stop the spread of the virus.”