Stores have been overwhelmed by online orders since the start of the pandemic, leaving vulnerable people who are self-isolating with the nightmare scenario of running out of food. With delivery slots booked up for several weeks, retailers are now trying to find the best way of helping those most in need. But there are still concerns that not all of the most vulnerable will be reached in time.

Norman Phillips, 68, who is a carer for both his wife and his 91-year-old mother, who both have dementia, had to queue to shop in a supermarket because he could not get a home delivery slot.

On top of that, he is not old enough for the over-70s only hour. Sainsbury's, Waitrose and Asda have now said they will use NHS data released on Friday to identify the 1.5 million most at risk of serious illness or death from the coronavirus to offer them priority for deliveries.

Tesco and Iceland have taken a different approach, urging the young and healthy to shop in stores to free up delivery slots for those self-isolating.

Tesco boss Dave Lewis said: "It's difficult to get a delivery slot for online shopping. We're doing everything we can to create more slots, but we're at full capacity for the next few weeks.

"If you can come safely to stores, please do. Every online slot we free up will help those most vulnerable and those who are self-isolating. It could save lives."

The move to use NHS records to identify those most in need has already proved controversial, as it only applies to people in England and not those inWales.

And even with the information supplied by the Department of Health, it could still be many days or even weeks before those deemed most at risk receive the supplies they need, according to industry sources. 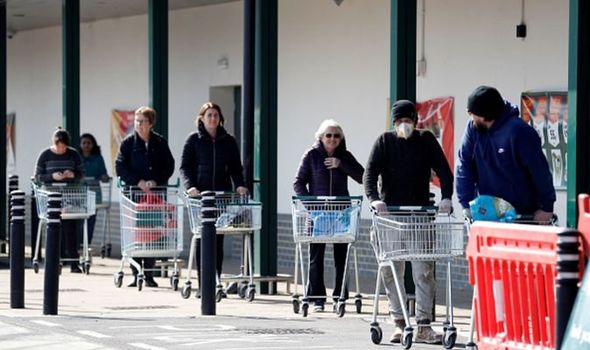 Shoppers observe social distancing as they wait in a queue outside a supermarket (Image: ADRIAN DENNIS/AFP via Getty Images)

A source at the British Retail Consortium, which represents most of the major supermarket chains, said its members were "looking at prioritising delivery slots".

He said: "They are hoping that having the NHS list of those vulnerable people can help them identify those who most need help as quickly as possible.

"In the meantime, it is perfectly legitimate to say to people who are able to go to the supermarket to do so, so that online deliveries can be targeted at the elderly and vulnerable."

The Welsh government said it is trying to resolve the disparity with vulnerable people living in England.

Philip Pearce, from Bridgend, said: "I went on to the UK Government's web page, but found I couldn't sign up because I live inWales.

"It's ridiculous. How am I meant to get my shopping delivered now? I have always had it delivered but now I'm expected to pick it up.This can't be right."

John Evans, who lives in Llanharry, Rhondda Cynon Taff, cares for his disabled wife and has family members who are asthmatic.

He says he also went on to the Sainsbury's website to register as vulnerable, but it directed him to the UK Government page, which asked if he was living in England.

He said: "It's ridiculous and frustrating and I'm not the kind of person who isn't familiar with being online."

Age Cymru is a charity working with older people in Wales. Chief executive Victoria Lloyd said: "Many older people have told us that they have to wait up to three weeks for a delivery, while others were simply thrown out of the registration process. "Systems must be put in place to enable the supermarkets to verify who exactly needs to be given priority in Wales."

"We have already booked in slots for 115,000. And this number is growing every day.

"Where these people are already registered with us, we will start to write to them to offer them a delivery slot.

"We are also working hard to secure details for vulnerable people living in Wales, Scotland and Northern Ireland."

Asda will also use the NHS records to prioritise the most in need.

A spokesman said: "We have been working with the Government and some of our fellow supermarkets to ensure those people who have been identified as highly vulnerable get what they need and are protected from Covid-19.

"We're doing all we can, and would continue to urge customers who are able to visit shops to think of how they can support others in their community and if they can shop for them, allowing us to maximise our online capacity for those who need it most."

Ocado boss Stuart Rose said it was looking to recruit van drivers to increase the number of delivery slots it can offer.

And the Department for Environment, Food and Rural Affairs is said to be coordinating with wholesale food suppliers about using their networks to help keep the vulnerable fed during the crisis.

There is a real chance that 50-60 clubs will go bankrupt. The owner of Huddersfield about the consequences of the pandemic
Valverde about the game with Manchester City: we Want to play so that we can go further. Real is ready to do anything for this
Great selection from Roma: KAFU opens up in the box and waits for a pass, but instead Totti and Batistuta score masterpieces
Sabitzer has been exposed to coronavirus in April
In the 90s, the Russian club played in the Finnish championship: the players carried cigarettes, the President went on the field. It ended because of the default
Flick about Holand: it is the first season, so it is too early to compare it with Levandovsky
Felix sprained a knee ligament in training. This is his 3rd injury of the season at Atletico
Source https://www.express.co.uk/news/uk/1261819/coronavirus-crisis-supermarket-food-supplies-NHS-vulnerable-people-home-deliveries?utm_source=feedburner&utm_medium=feed&utm_campaign=Feed%3A+daily-express-news-showbiz+%28Express+%3A%3A+News+%2F+Showbiz+Feed%29

Cummings would have been sent home if caught, says ex-chief constable

Wirral could be one of worst-hit areas for coronavirus

Which shops can reopen next month and what will stay closed

Junk-filled home with rubbish in every room up for sale for £210,000