Reams of black wiring suspended between poles, haphazardly bundled into nest-like knots, and often hanging at head height are a common sight in Bangkok, and has become almost synonymous with the city.

“If you walk around my area, there are many wire bundles hanging down to human height or sitting on the ground along the pedestrian walkway,” says Kullapa Sakkaravech, a language teacher from Bangkok.

She lives in what is considered “the new central business district” of Bangkok yet says “clouds of wire bundles” still hang in front of her apartment. “Apart from being unappealing, this can potentially be dangerous for kids and especially hazardous during flood or raining season.”

However, following a tweet by actor Russell Crowe, that could be about to change.

In a post captioned “Bangkok dreaming”, Crowe, who was in Thailand throughout September and October filming a Vietnam war movie, The Greatest Beer Run Ever, shared a photo of the city’s much-reviled communication and electrical wires.

The tweet spurred others to share similar images, along with questions as to why they were in such a state.

Now, Thailand’s prime minister Prayuth Chan-o-cha has called for electrical and communications cables to be better organised and put underground.

Many wires may no longer be needed but cannot be removed because they’re so entangled, says Dr Napong Rugkhapan, assistant professor in urban planning at Thammasat University in Bangkok. “When an internet service provider wants to add in a new line for a new condominium being constructed, they add to that because it’s not their responsibility to take [any] out.”

However, given the numerous previous calls for the webs of wires to be moved underground, some are sceptical as to whether this latest push – even one inspired by a Hollywood actor – will change anything. 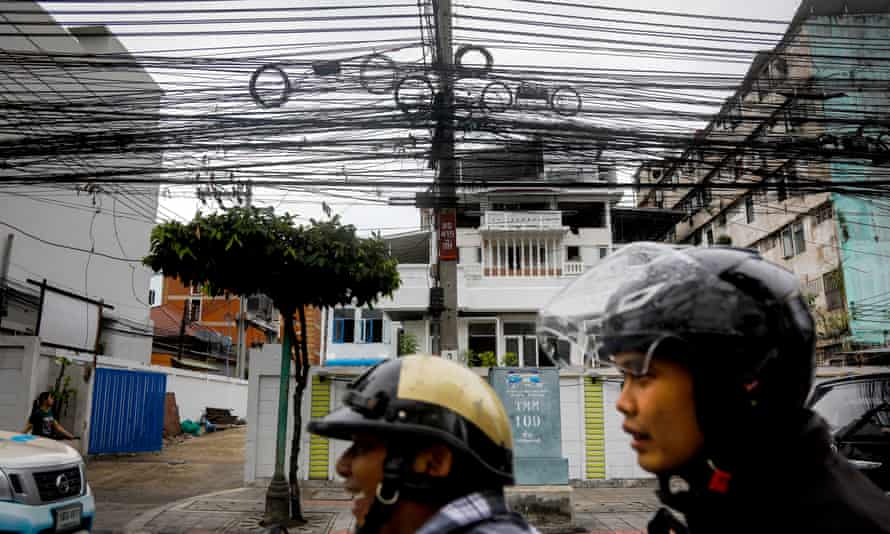 Bangkok’s fragmented approach to utilities has been blamed for the chaotic wiring. Photograph: Diego Azubel/EPA

The fact that no one has died as a result of the wires means it is not at the top of the agenda, Rugkhapan says. Yet people stumble over fallen cables daily, he added.

Sakkaravech says: “There was a time when we had heavy rain, a tree fell and pulled down a bundled wire causing an electricity outage to residents.”

Thus far, a lack of coordination between the various agencies and limited political will has been to blame for the slow progress, Rugkhapan says.

Celebrity involvement in the issue can be traced back to 2016, when Microsoft co-founder-turned-philanthropist Bill Gates commented on Thailand’s “tangled wires” on Facebook. The post was deleted after Gates wrongly identified the wires as power lines rather than communication wires.

Historically, electrical authorities have blamed the telecommunications industry for the increasing number of lines and messy wires.

Despite the confusion, shortly after Gates’ comment, authorities committed to putting 127 kilometres of both power and communication cables underground. Prayuth urged the agencies to speed up the first phase which focused on 39 roads in and around the capital.

Progress has been made in certain areas, including on major thoroughfares such as Silom and Sukhumvit, but navigating hazardous wiring is still a part of daily life in much of the city.

For example, three years ago when the sky train was being extended around Kasetsart University, instead of moving the utility lines to make way for the construction, workers instead opted to cut all the branches off the trees to make space, causing public upset, Sutabutr says.

“Without public outcry over this kind of situation, then the authorities will think what they’re doing is OK,” she says.

Yet Crowe’s tweet, and his status as Thailand’s “accidental ambassador” could help to accelerate the mission to move the wires out of sight.

Kanchanaphan Vanichkul, a business owner in Bangkok, says ultimately Crowe’s intervention will speed up completion of the project. “I have to thank him very much for making many people around the world pay more attention to our country.”

How the cost of living crisis will impact people on Merseyside