Joanna Lumley insisted the Queen remains a unifying figure across the world but the Royal Family in itself cannot count on the same level of support. Asked whether supporters of a republic could successfully take over, the actress conceded any change could not be ruled out. Speaking to Andrew Marr on Sunday, Ms Lumley said: "I think one can nowadays never second guess the future.

"We all thought we'd be out of lockdown now and look, we can hear the clink and clank of change."

She continued: "The Queen seems unassailable no matter what people have to say, whether they're monarchists or not, republicans.

JUST IN: 'Obeyed her like a puppy' William so starstruck by Taylor Swift he 'made a fool of myself' 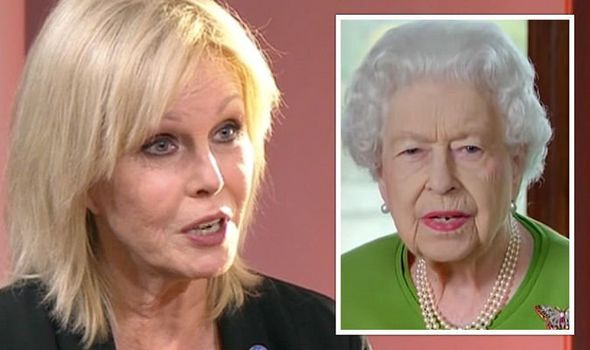 Ms Lumley added: "It's not about the Royal Family, it's not about politics, it's not even about the monarchy – it's about this particular person and how she's managed to carry the trappings of state like an enormous burden.

The Royal Family has been facing increasing pressure in recent years over the unprecedented departure of Prince Harry and Meghan Markle as well as Prince Andrew's legal woes.

Her Majesty has remained steadfast in her position but the repeated blows, exacerbated by the death of Prince Philip earlier this year, evidently took their toll and forced her to take a rest from duties.