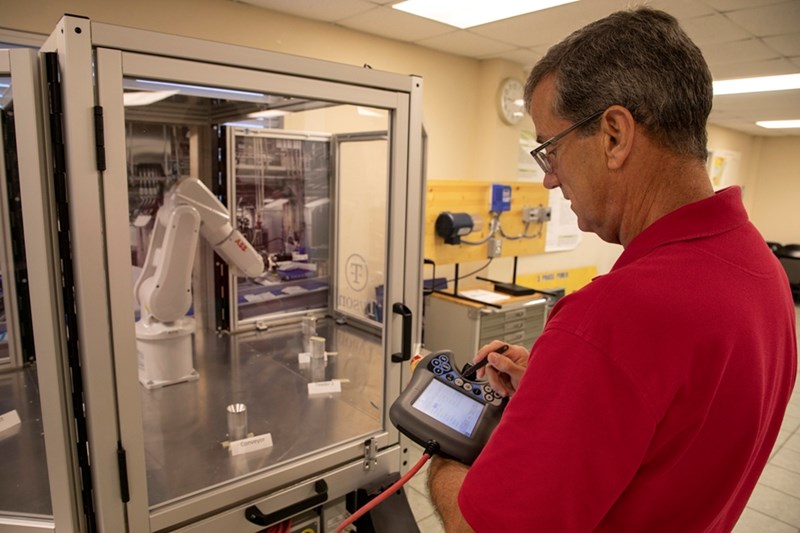 Don Johnson, professor in the Department of Agricultural Education, Communications and Technology, demonstrates the six-axis robot being incorporated into the curriculum for agricultural systems technology management.

FAYETTEVILLE, Ark. – The Department of Agricultural Education, Communications and Technology in U of A's Dale Bumpers College of Agricultural, Food and Life Sciences recently received a unique grant from Tyson Foods.

The grant is for a robot that will be used in many agricultural systems and technology courses. Tyson awards the grant to nine schools around the state to encourage student engagement in science, technology, engineering and math.

Don Johnson, agricultural systems professor, said the robot will be used in existing classes, as well as an upcoming special topics class on agricultural industrial robotics.

"Robots are often used in industry," Johnson said. "This class will help prepare students to use them in the workforce."

The programmable six-axis robot can be programmed through a touchpad or software. In industry, similar robots are often used for palletizing or welding. Industrial robotics technology continues to evolve and is being increasingly used in the food processing industry. It is just now appearing in secondary agricultural education.

Students will become familiar with the machine to use in industry or to use as a teaching tool.

The agricultural systems and technology management concentration in AECT stays up to date on precision agriculture technologies and other industrial machines such as drones, irrigation methods, robotics and GPS automated systems.

"If it is something technologically related and relevant, we use it and teach it," Johnson said.

Johnson attended a training through ABB, the manufacturing company for the robot, to gain further knowledge on the system's operations. Rodney Ellis, a technical education liaison with Tyson Foods, coordinated the training workshop. Ellis is a U of A and Bumpers College graduate in agricultural education, communication and technology.

The grant from Tyson is equivalent to $50,000. Along with the robot, Tyson donated 100 copies of software programming.

About the Dale Bumpers College of Agricultural, Food and Life Sciences: Bumpers College provides life-changing opportunities to position and prepare graduates who will be leaders in the businesses associated with foods, family, the environment, agriculture, sustainability and human quality of life; and who will be first-choice candidates of employers looking for leaders, innovators, policy makers and entrepreneurs. The college is named for Dale Bumpers, former Arkansas governor and longtime U.S. senator who made the state prominent in national and international agriculture.

Russia, Germany and Portugal qualify for the Champions League (Bild)
Barcelona will not buy Neymar for 175 million euros and will focus on the transfer of Lautaro
🔙 Spanish football will return for the second half of Rayo Albacete. The first one was played six months ago, when the match was stopped because of zozuli's insults
Ulreich doesn't want to be Bayern's third goalie. He can move to Schalke
Lionel Scaloni: Lautaro will get better playing with Messi. He has a great future, but we need to give everything we can
The reading player criticized Phil Neville: I was hurt by the words that the England team was used as a springboard
Casillas on the best players in the history of Real Madrid: Di Stefano and Ronaldo
Source https://news.uark.edu/articles/51633/bumpers-college-agricultural-systems-technology-program-utilizing-robot-donated-by-tyson-foods