Sunny Angel said her partner, who had learning difficulties, appeared “terrified” as he forced himself on her on their wedding night.

Said to have the “mental age of a child” he was allegedly instructed by his mum, who stood by the door, to make sure their marriage was “consummated”.

Afterwards he said: “I’ve done it now, can I have the chocolate?” 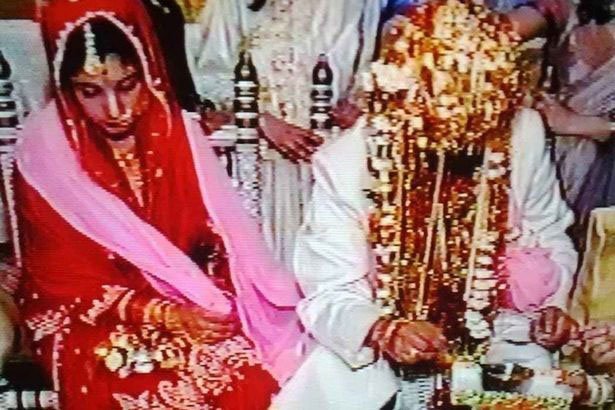 SCARED: Sunny Angel said her husband looked terrified as he forced himself on her (Pic: Sunny Angel)

She said the rape on her wedding night was the first of numerous attacks, with her mum-in-law standing outside every time they had sex.

But despite the terror, she faced she doesn't blame her “vulnerable” ex-husband and said he was exploited “in the name of honour”.

Sunny, now aged 40 and living in Surrey says her groom – referred to by the pseudonym Ajay, appeared to be “under orders” to attack her.

Speaking to The Sun about the first time she was raped, which allegedly happened in the late 1990s, she said: “I could see it in his eyes he didn’t want to rape or hit me.”

Talking about her husbands mum Sunny added: "She'd say, 'I want a grandson, you have to do this', then stand outside the door every time we had sex telling him what to do, it felt like he was under orders to do it.

"He didn't even want me to see him naked. He seemed really scared."

Sunny was raised a Hindu and had been matched with Ajay by her parents who had started planning her wedding when she was 19.

But love letters, in which Ajay vowed to treat her “like a princess”, has actually been written by his mum.

VULNERABLE: She said her husband was exploited 'in the name of honour' (Pic: Sunny Angel)

Speaking about her ordeal last year she said: "When he would call me on the phone, it was actually someone else pretending to be him.

"The cards he sent me were written by his mum."

It was only after the couple’s wedding in 1999 that Sunny learnt about her groom’s disabilities.

She recalled some of her mum-in-law's chilling instructions to Ajay as he raped her that night – to strip her and beat her if she put up a fight.

And in the following weeks and months, he would sit next to Sunny, laughing, and ask her whether she loved him "more than cake".

Sunny claims Ajay was used as a "pawn" by his parents – who reportedly demanded £10,000 and a "brand new", personalised Mercedes as a dowry.

Four months after the couple wed, their marriage ended after Sunny was hospitalised because her mum-in-law had "stopped her eating".

She returned home and the pair finally divorced.

Forced marriage has been illegal in the UK since 2014.

As a forced marriage and abuse survivor, Sunny has a powerful message to others.

She said: “Some get justice, some don't – but Karma always delivers.

"Never lose hope. Step into the light with me."

Everton lost for the first time in the season, but remains first in the Premier League
Hazard was included in Real Madrid's bid for the match against Borussia Monchengladbach
Pele: When they play football on the moon, I will fly to kick the ball a little
Newcastle have signed a Frenchman who worked on a construction site in Australia a year ago. The guy came to view and scored through himself
Hans-Dieter flick: Sane worked with Klose, it was good for him. Bayern are happy with Leroy
Paulo Fonseca: Juventus and Inter claim the scudetto. But Serie A is balanced
Benzema on Khabib: the Greatest in history
Source https://www.dailystar.co.uk/news/latest-news/755870/Sunny-Angel-forced-marriage-rape-Surrey?utm_source=feedburner&utm_medium=feed&utm_campaign=Feed%3A+daily-star-latest-news+%28Daily+Star+%3A%3A+News+Feed%29

What is tier 4 lockdown?

HS2 bridge project completed - thanks in part to Darlington firm

Asda is doing a meal deal where you can get a main, side, dessert and bottle of wine for £10