Maros Sefcovic, European Commission vice president, is keen to reach an agreement, and has even suggested making a unilateral move to speed up the process, ahead of a meeting with Lord Frost tomorrow. Simon Coveney, the Republic of Ireland’s foreign affairs minister, said it had been “difficult to make progress” on the issue.

The UK and EU are currently negotiating to find an amicable means to continue to supply medicine to Northern Ireland, among other issues on the table.

But so far talks have been unable to reach a settlement.

The Northern Ireland Protocol leaves the country in the single market, allowing goods to flow between it and the rest of the EU without checks.

Northern Ireland gets most of its medicines from the rest of the UK. 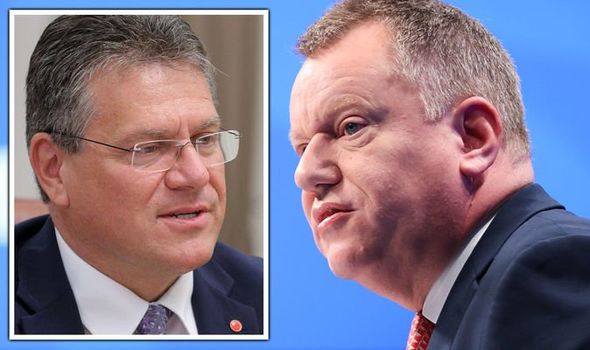 Sefcovic suggested a unilateral move to speed up the process ahead of a meeting with Lord Frost (Image: Getty)

Speaking to a Northern Ireland Assembly committee on Wednesday, Mr Sefcovic said: “I would 100 percent prefer if we can present this good solution as a joint approach.

“But I'm fully conscious of time. I have to be very, very clear that we are ready to move on our own if it's not possible at this stage to push on a joint approach.”

Controls have yet to be imposed on goods flowing into Northern Ireland due to a “grace period” after the UK left the EU.

This period was set to expire in January, but the Government has extended it indefinitely to allow for talks. 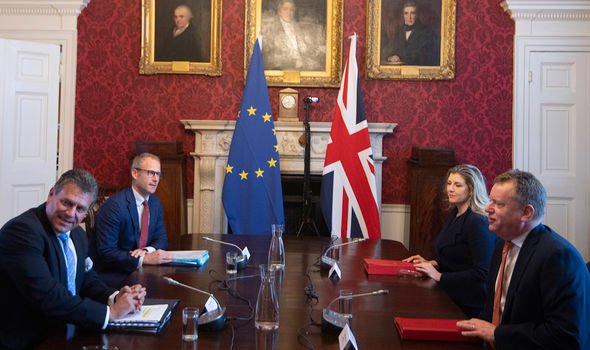 The UK and EU are currently negotiating to find an amicable means to continue to supply medicine (Image: Getty)

Some firms had said that they intended to stop supplying medicines to Northern Ireland at the end of the grace period, as the checks would prove too costly.

On Wednesday, Stephen Farry, deputy leader of Alliance Party, said any unilateral move by the EU over medicines would not entail removing medicines from the Protocol.

Mr Farry said: “Instead, a major workaround to overcome need for regulatory compliance and checks to aid free supply of medicines in [Northern Ireland].”

He added: “In fact, vital that [Northern Ireland] remains inside the Protocol for medicines as this gives us the unfettered access to Single Market. 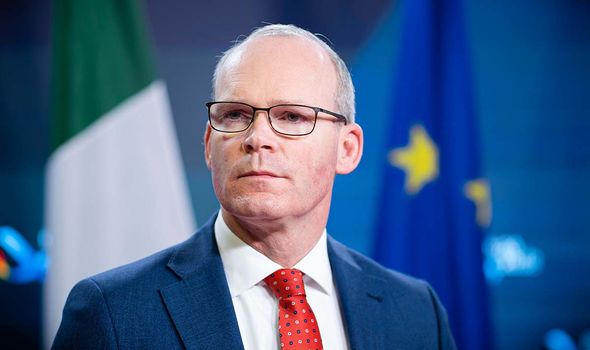 Coveney said it had been 'difficult to make progress' on the issue (Image: Getty)

“This is dual market is vital to growing local Pharma industry.”

After Edgar Morgenroth, an economics professor in Dublin, suggested that it would be a “good move”, Irish peer Kate Hoey responded: “No need for medicine controls in first place so nothing special from the EU.”

During a visit to London yesterday, Mr Coveney said he believed it possible to resolve some issues with the Protocol, but the prospects of a fresh agreement before the end of the year remained gloomy.

He told RTÉ News: “I don't think there will be a full deal on all issues related to the Protocol for Christmas. 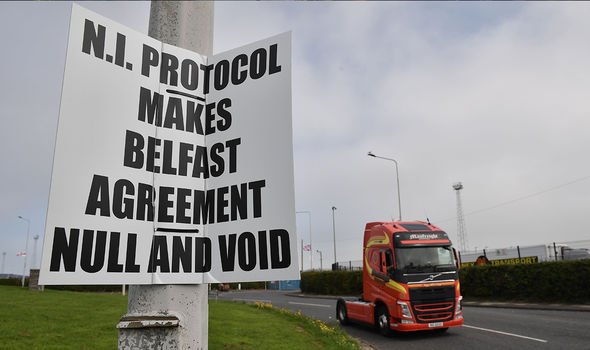 Northern Ireland gets most of its medicines from the rest of the UK (Image: Getty)

“But I think some things can be agreed this side of Christmas, hopefully, like giving certainty to people in Northern Ireland in terms of the supply of medicines from Great Britain into Northern Ireland.”

He added: “It's been difficult to make progress, but I think there has been some progress.”

Last week, an industry chief warned that the EU’s current proposals on revising the Protocol were “ultimately unworkable” for medicine suppliers.

Mark Samuels, chief executive of the British Generic Manufacturers Association (BGMA), said that an “extremely low” number of new licenses being issued for the country meant there was “a force nine gale heading Northern Ireland's way”.

He called for a UK-wide licence as “the only way to avoid this storm”.

Mr Sefcovic reportedly told the Northern Irish Assembly that the Protocol is “not perfect but it is the best response to the UK's decision to withdraw from EU and the form of Brexit the [UK] Government has chosen”.

‘We Don’t Talk About Bruno’: Why everyone is in love with the hit song from Disney’s Encanto

What it means for Liverpool as FSG given £2.3bn boost

Milan’s Stefano Pioli: ‘Having fun is fundamental … football is passion’

Rebecca Watson: ‘This novel was never an act of catharsis’

'It's not as glamorous as it looks' - Meet the Newcastle models working for Barbour, ASOS and Little Mistresses

I told my best friend our new baby’s name and she announced she is calling her son the same, but she’s not even pregnant