Bill Bailey has been focusing on Blondie. Specifically on the band’s 1978 hit One Way or Another. It is a slightly menacing track, covered more recently, it is true, by One Direction, in a way that took it closer to irritant than menace. The question was, could its pulsing, insistent rhythm take Bailey a two-step closer to the top slot in Strictly Come Dancing?

This far into the show’s 18th series, the 55-year-old British comedian and dance contestant is established as a seasonal tonic for the nation, but last week the betting was also odds on that he would make it all the way through to the final.

Bailey was hired, the show’s millions of viewers can’t really be blamed for assuming, to fill the role previously occupied by previous plump participants, such as John Sergeant and Ed Balls. But Bailey has surpassed expectations. A gifted musician who was discovered to enjoy perfect pitch as a child, he recently revealed in his autobiography that as a teenager he took ballroom dancing lessons where he learned how to waltz, foxtrot and quickstep.

It was his outing in week four of the BBC One show in which he danced to Rapper’s Delight with his professional partner, Oti Mabuse, that really caught the judges’ attention. It showed the sort of deft physical control that surprised many, but it is just one transformation among many shifts through Bailey’s career. Mabuse clearly knows how lucky she is to have a remarkable natural chameleon by her side. She has tweeted of the pride she feels in his achievements on the dance floor. “Every week, he comes in as a blank canvas and he falls in love with the dance and learns it all from scratch only to perform it on Saturday. He puts so much heart in. I can only see him as my blessing,” she wrote on Twitter. 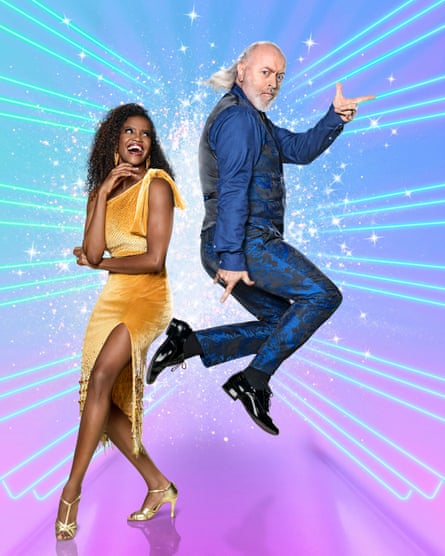 Oti and Bill – ‘he puts so much heart in it,’ she says. Photograph: BBC/PA

So who is the real man behind that blank canvas? Bailey is perhaps most happy in the guise of unkempt, birding nature-lover, a kind of Bill Oddie in-waiting. In fact, in 2010 he went on a tour of small venues in the highlands of Scotland, although he was capable of filling out arena-sized gigs, simply “because it’s so beautiful there”.

The comic is also relaxed in the role of an accidental clever-clogs on television quiz shows such as QI and Have I Got News For You. His comedy has always mined fertile seams of nerdery – comfortably extracting jokes about Cern’s Large Hadron Collider and handling the big topics in science and philosophy with his trademark brand of magical thinking.

In other stage shows, Bailey has been ready to pick up the baton of musically adept comedians of yesteryear, such as Victor Borge or Tom Lehrer. His Albert Hall stage show about the instruments of the classical orchestra was a sell-out attraction. As a performer he is confident enough in his knowledge of the range of genres of music to pastiche each. He knows his composers, from Mozart to Kraftwerk, and can play around with them all.

Reviewing this show in 2008, the Guardian’s Brian Logan wrote: “With Bailey, we expect the surreal. But there is more oddness at play here than usual, as the hairy comic scurries about the Albert Hall stage, cracking jokes while an orchestra plays Nokia ringtones and the theme tune to Emmerdale Farm. The oddness relates partly to the evening’s uncertainty of tone.”

Logan recognised that Bailey’s humour has never come from that destructive and abandoned place where many egotistical standups seemed to have been forged. Rather, he wants to bring his audience along to a better world, and this can be a tricky mood to establish when a big crowd is baying for laughs.

When he gets it right, as Logan acknowledged, it is usually by foregrounding his own enthusiasms and, say, deconstructing Rossini or the EastEnders theme, then “it’s sublime, as stately form meets daft content, and Bailey runs riot in the candy shop of his musical imagination”.

Despite a long track record in live comedy, it’s possible that for some Strictly fans Bailey was only familiar as a diverting character they had spotted in a string of cult television sitcoms, from Black Books, in which he played to great effect opposite Dylan Moran and Tamsin Greig, to Spaced, where he played Bilbo Bagshot. 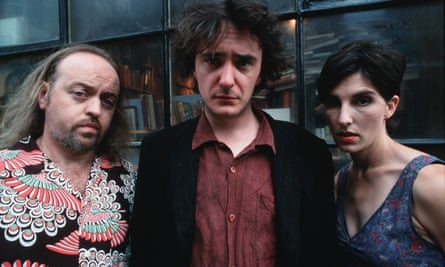 So perhaps Bailey’s transition at this mature stage into yet another being, a full-on, toe-tapping, bowler hat-tipping Bob Fosse-type, should not have come as a shock.

The real Bill Bailey is actually not called Bill at all, but Mark Bailey. He earned the nickname Bill at school because he was reportedly so good at playing the old Dixieland standard Won’t You Come Home, Bill Bailey on the guitar. Mark was the son of a GP and a ward sister and applied himself academically at his independent school in Bath … until music began to distract him.

Before he formed a teenage band with friends, Bailey is recorded as the kind of all-rounder who would usually be considered head boy material. He was the only child in his year to take an A-Level in music, and he came out with an A grade. He was as good on the cricket pitch as in the classroom. This surely is where the comedian will have learned to appear so unthreatening, not to say cuddly, in order to defuse the envy of others. It is a schtick that has stood him in good stead.

When Bailey took over from Sean Hughes as a team captain in the BBC2 music quiz show Never Mind the Buzzcocks in 2002, he appeared content to be teased by the programme’s host, his old friend Mark Lamarr, as if he was a country bumpkin, despite the fact that he could probably have played every instrument on every record they had to answer questions on.

A stage demeanour that appealingly plays up the west country hippy angle is not exactly a distortion of the truth, but it does sidestep some of the political urgency he must have felt when he once appeared in radical leftwing theatre alongside Vanessa and Corin Redgrave in the Workers Revolutionary Party’s touring company.

Reviewing his 2010 show, Dandelion Mind, critic Stephanie Merritt noted that although the show dealt with the big issues of doubt and cosmic mystery, moments of politics glinted through and “unleashed some of Bailey’s sharpest and punchiest comedy”. Mindful not to scare the horses, however, he would quickly call a halt with a knowing cry of “On with the whimsy!”

In the nation’s hour of need, Bailey has not just entertained us on Strictly. Last month he also brought out his Remarkable Guide to Happiness to lift spirits with life-affirming images of strawberry plants and stories of how his mother taught him to remember music with visual imagery. (The national anthem is a parade of carrots).

His Strictly performances have seen him ascend the heights. He and Mabuse scored a mighty 27 points with their Couple’s Choice offering a fortnight ago, putting them at third place on the leader board. The following week they dropped a little with their American Smooth dance. Then came Blondie and the Jive sequence on Saturday.

Bailey has talked of his difficulty in appearing to be taking the lead role as they dance. “As a non-dancer, that’s a little bit unnerving,” he confessed this month. “When we’re in rehearsal, Oti has got her techniques, she’s got my hand and she’s nudging my leg.”

After Strictly, Bailey will deserve a rest. But he may not be taking one. Coronavirus allowing, he will be performing his one-man Christmas Larks show at the Lyceum theatre in London to distanced audiences – standup comedians, unlike pantomime casts, can be mobilised or stepped down at short notice with relative ease.

If Bailey is taking his fresh identity as a television twinkle-toes in his stride, there remains one mystifying fact. Although he is a hugely successful comedian, he has not yet been properly commercially packaged by the entertainment industry. Bailey must have resisted the pressure. This is admirable, if true, but it is also amusing that he now finds himself playing such an important mainstream role in British culture at a time of need. He is basically Santa.

Dinamo Zagreb-federations: 14 Dynamo players brought the team silver at the 2018 World Cup, and in response, the judges kill us. You are not worried about Croatian football
Tuchel on the zeros with Wolverhampton: If we play like this, the result will come. I liked it
Nuno on the draw with Chelsea: We understood that we would not have much possession
Messi broke Barcelona's record for the number of games in the Spanish Cup
Martin Edegor: Arteta seems to me a top coach, I like his ideas
Napoli has full confidence in Gattuso. The club has released an official statement
Jurgen Klopp: In this world, trust is lost very quickly: either everything is fine, or vice versa. But there are many stages in between
Source https://www.theguardian.com/culture/2020/nov/29/bill-bailey-comic-musician-and-now-strictly-dance-master