Be your own Italian masterpiece: how people are recreating classic artworks in coronavirus quarantine

What is an art enthusiast to do, now galleries and museums around the world have closed their doors? The Getty museum, based in Los Angeles, has a suggestion: recreate famous works of art using household items.

The institution issued the challenge to its Twitter followers on Thursday last week: choose your favourite artwork, recreate it using three items lying around your house and share it with the world on social media.

We challenge you to recreate a work of art with objects (and people) in your home.

The responses have ranged from the hilarious to the impressive, with recreated artworks including classics such as Master of Saint Cecilia’s Madonna and Child, the anonymously created Virgin, Saint Elizabeth, and the Infants John the Baptist and Christ; as well as modern works such as Helen Frankenthaler’s Mirabelle – now featuring strategic but perhaps inadvisable use of that precious commodity, toilet paper. 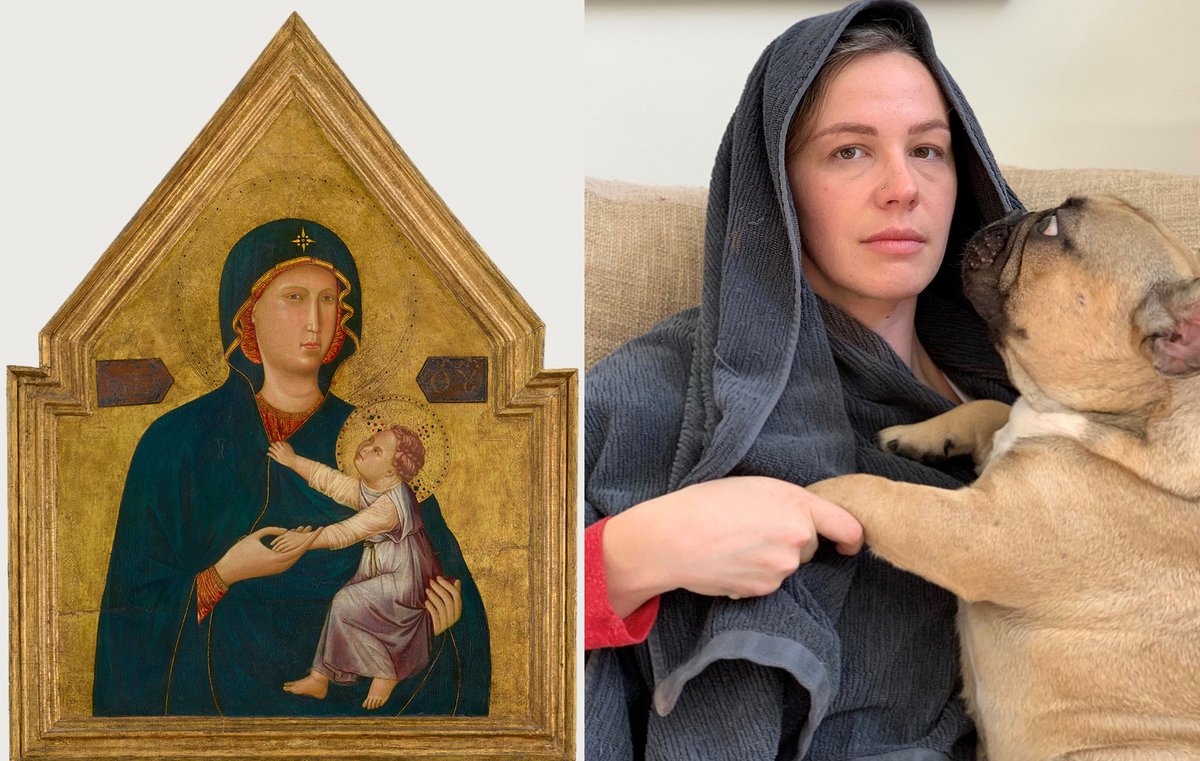 The Virgin, Saint Elizabeth, and the Infants John the Baptist and Christ, but now with more unicorns...https://t.co/EUDgg7362Y pic.twitter.com/uSqoPFGF2d

The Getty museum is not the first to suggest whiling away self-isolation with ad hoc art experiments.

Over the course of a week, the roommates, based in the US, have been recreating classic works of art and sharing them on social media.

The recreations, which began with Jacques-Louis David’s The Death of Marat, have become progressively more detailed and adventurous.

The most recent post at the time of writing was a version of the surrealist work The Son of Man by René Magritte, including a behind-the-scenes look at how they managed to get an apple to appear as if it was floating in front of model Sam Haller’s face.

“If you ever need a model for the soft face of a Dutch peasant girl, I’m your man,” said Haller when he shared the pictures on Facebook last week, including one of him as Johannes Vermeer’s Girl with a Pearl Earring.

President of Brescia on the restart of Serie A: a Crazy decision. It is dangerous to resume the tournament by playing three matches in a week
Sandro Rosel: Neymar is the best player in the world after Messi. I would try to sign him to Barca
The next season of La Liga wants to start on September 12
In Austria, the club was stripped of 6 points for violating the training Protocol. This may deprive him of the championship
Matches of the 1/4 final of the FA Cup will be held on June 27-28, the final – on August 1
Jamie Carragher: Manchester City are the Champions League favourites. Liverpool relegated, Barcelona is not the same
Barcelona agreed with Lautaro's agents on a salary of 12 million euros
Source https://www.theguardian.com/culture/2020/mar/30/be-your-own-italian-masterpiece-how-people-are-recreating-classic-artworks-in-coronavirus-quarantine

Young mum, 21, left dripping with blood from horrific head wound after man, 30, attacked her in street with bottle

UK's 10 best beer gardens - where lockdown could be lifted first

Mum gets rid of massive coffee stain on her bed using £1.50 cleaning spray & it only took a few minutes

Xbox Series X will have THOUSANDS of games available to play at launch, Microsoft reveals

Recycling centres in West Lothian are to reopen next week

Salesman defrauded car dealership to pay for drugs and gambling

Teenagers forced to jump in canal by savage armed gang

Sign up for one of the Liverpool Echo's newsletters

Audacity is necessary in Ecuador

Brexit POLL: Do you think Remainers will get Brexit delayed in latest plot? VOTE

TalkTalk down: Internet and broadband not working as users struggle to access network

What are Scotland’s new lockdown rules?

Fish of the Week: Fish on, folks

Kids are more likely to die by LIGHTNING strike than Covid caught at school, says expert

US south-west in grip of historic 'megadrought', research finds

CLUB IN FOCUS: Perthshire Hockey show their spirit and togetherness

Baby with two mouths has operation to remove one of them

Check coronavirus confirmed cases where you live or further afield

Borini on positives of Liverpool spell and two 'traumatic' injuries