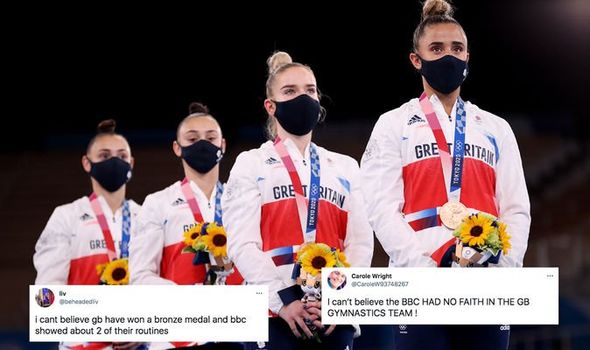 The BBC has come under fire for missing team GB's historic gymnastic medal (Image: Getty)
Sign up to receive our rundown of the day's top stories direct to your inbox

Team GB athletes secured a bronze medal in the women's team gymnastics event, the first medal in that even for nearly 100 years. But the BBC were so focused on covering who would take home the gold medal, they missed that the GB athletes were in touching distance of the bronze medal.  The tense final saw USA go head-to-head with the Russian Olympic Committe (ROC), with the latter clinching the gold medal after an impressive floor routine.

The American team had been the favourites, but were hit with devastation as star athlete Simone Biles pulled out after competing in just one of the rotations.

But the BBC's coverage was so focused on which of the two teams would secure gold, they failed to notice that the young GB team were also in a medal position.

The lack of attention to the GB team has prompted a furious backlash on Twitter, as the team's success appeared to be just an afterthought by the commentators.

One person wrote: "I can’t believe the BBC HAD NO FAITH IN THE GB GYMNASTICS TEAM!"

Another user fumed: "Team GB have taken bronze in the women's team gymnastics but you wouldn't have seen that on the BBC iPlayer because it focused on ROC and USA and couple of other teams performances than that of TEam GB. "

"Such a disappointment concsidering we last won a medle in this event in 1928."

A third said: "Criminal that we didn't get to see GB get their first medal in the gymnastics though. Poor from BBC either way."

Another person added: "Been watching Gymnastics on BBC for HOURS and seen only two routines from GB.

Paedophile hoped to be Father Christmas and go into schools

The shock headbutt, a pub confrontation and the Ospreys v Cardiff dislike that spilled over

Live updates as fire rips through three houses in Southport

FIFA 22: The Premier League players with the highest potential on Career Mode

Help us find the best new dog-friendly business for £1,000 prize