A 21-year-old debutant and a bowler in his second Test have helped India rock Australia’s bid to reclaim the Border-Gavaskar trophy in Brisbane, where the hosts will resume on day four 21-0 with a 54-run lead.

Josh Hazlewood finished with a haul of 5-57, having led the way as Australia reduced India to 186-6 in the post-lunch session on day three of the series-deciding fourth Test. Australia had removed Cheteshwar Pujara, Ajinkya Rahane and Rishabh Pant, while they had the security blanket of a second new ball to come in the shadows of tea.

But Washington Sundar and Shardul Thakur shifted momentum in scarcely believable fashion, even by the standards set in a topsy-turvy series level at 1-1 with two days remaining. India were eventually rolled for 336 after a rollicking 67 from Thakur, whose first-class batting average was 16 from 62 games, and Sundar’s composed 62 on Test debut.

Tim Paine’s team are locked in a race against the clock in Brisbane, where they must win the final Test to end India’s four-year hold of the Border-Gavaskar trophy. Wet weather, which washed out Saturday’s final session and is forecast to interrupt days four and five, has added another degree of urgency to the scenario.

The magnitude of Sundar and Thakur’s 123-run stand, kickstarted when the latter got off the mark by hooking Pat Cummins for six, will become clear at the end of the game. 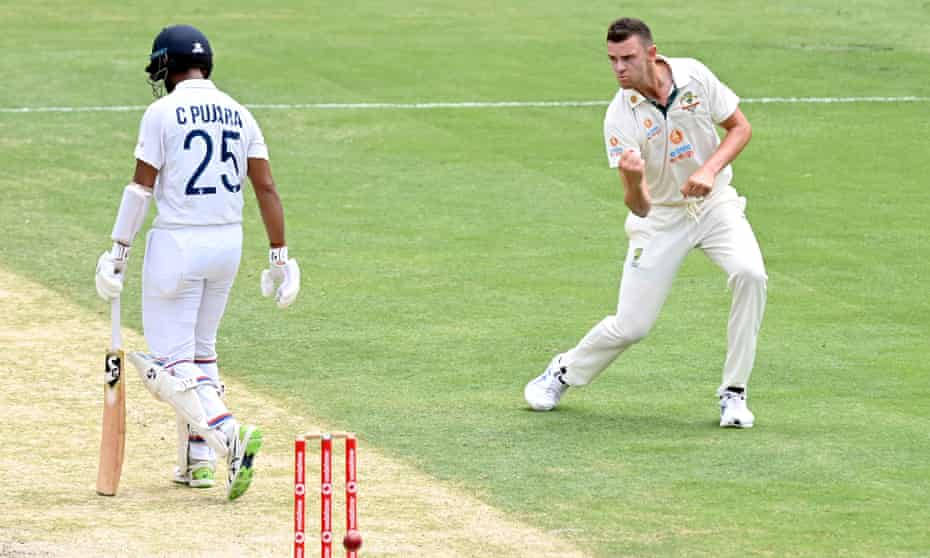 But the duo, with a combined one Test worth of experience before being called up as two of four enforced changes for the series finale, have already inflicted several blows to Australia’s morale and key men. Paine dropped a sharp one-handed chance when Sundar was on 45, with the tourists 272-6, and squandered two reviews after a week in which his tactics and tetchiness were criticised.

The timing of Monday’s declaration, presuming Australia are in a position to end the innings on their terms, will be one of the biggest calls of Paine’s captaincy.

Milestone man Nathan Lyon’s pursuit of 400 wickets, a story arc throughout the summer and especially leading up to his 100th Test, gathered no momentum on Sunday. Lyon recorded figures of 1-65 from 28 overs, extending a series in which India have regularly frustrated the off-spinner.

An unheralded India XI, in which Pujara and Rahane are the only members who also took part in the series-opening defeat, have refused to buckle despite the absence of captain Virat Kohli and other key personnel.

If Australia close out a series victory they will owe Hazlewood and Cummins, who bowled Thakur to snap the game-changing partnership, a debt of gratitude.

Ole Gunnar Solskjaer: Manchester United don't get a penalty after a month or two ago there was a fuss about it. Coaches influence referees
Klopp on 2:0 Sheffield: Many have written off from the accounts of Liverpool. We need to win, we can't get to the Champions League without it
Milan scored their 15th penalty of the season in Serie A - the most in the league. Before the record-three 11-meter
Liverpool scored 7,000 th goal in the top division of England - only Everton has more
Manchester United have 0 wins and 1 goal in 7 matches against the big six this season in the Premier League
The Hudson-Odoi hand show: Maguire said the umpires were told it was a penalty. VAR baffled us
Jota misses the match with Sheffield due to illness, Alisson-due to the death of his father
Source https://www.theguardian.com/sport/2021/jan/17/australia-frustrated-as-unheralded-india-duo-put-series-decider-on-a-knifes-edge

Jacob Rees-Mogg confronted by former MEP in Brexit row - 'It is disingenuous!'

'Enough is enough!' Britain urged to get tough with EU over City of London plot

Republican calls for $10,000 STIMULUS CHECKS to all Americans in last-minute amendment to Biden’s coronavirus package

Why the Budget will prove difficult for Keir Starmer

Louise Redknapp, 46, reveals she’s been ghosted on dating apps as she struggles to find love following split from Jamie

Now is not the time to hike taxes, but Rishi Sunak is still going to talk about it

Diver taken to hospital after being rescued off Roker Pier

Roberto Firmino denied Liverpool goal but may have something better

Antiques Roadshow guest in utter disbelief after pot is valued

I live in a medieval castle but it’s not a fairytale – I cook meals over a fire, it’s freezing & I can’t flush the loo

I stopped reading because I couldn't see myself in books. So I wrote one instead | Gary Lonesborough

Thoughtful man Glenn Roeder will be much missed

Couple raffle off breathtaking £500K home for £5 a ticket

How old is Rebekah Vardy and who was her Dancing On Ice partner?

‘No hospitalisations and no deaths’: All three US vaccines ‘highly efficacious’, Fauci says

'Johnny Briggs' charisma made him irresistible to women in Corrie'