LONDON — Britain said on Wednesday that it would curb the use of AstraZeneca’s vaccine in adults under 30 because of the risk of rare blood clots, a blow to the efforts of scores of countries reliant on the vaccine to stamp out the coronavirus pandemic amid a global surge in cases.

Adding to the unease, the European Medicines Agency outlined a “possible link” between the vaccine and rare clots, even as it said that Covid-19 remained the far greater threat, leaving decisions about how to use the vaccine in the hands of the 27 member states of the European Union.

Taken together, the decisions represented a considerable setback for the AstraZeneca shot, which has been seen as the principal weapon in the battle to reduce deaths in the vaccine-starved global south.

The world’s most widely administered coronavirus vaccine, it is far less expensive and easier to store than some of the alternatives, spurring its use in at least 111 countries, rich and poor. AstraZeneca, based in Britain, has promised to deliver three billion doses this year, enough to inoculate nearly one in five people worldwide.

Britons under 30 will receive another vaccine if one is available, with limited exceptions, officials said. Until Wednesday, Britain had not wavered in its use of the homegrown vaccine, holding out even as many European neighbors paused injections over the unusual, though sometimes fatal, clots.

But cases began to appear in Britain as well, and a consensus has since emerged among global regulators that the evidence points to a plausible link, as yet unexplained, between the vaccine and rare clots. 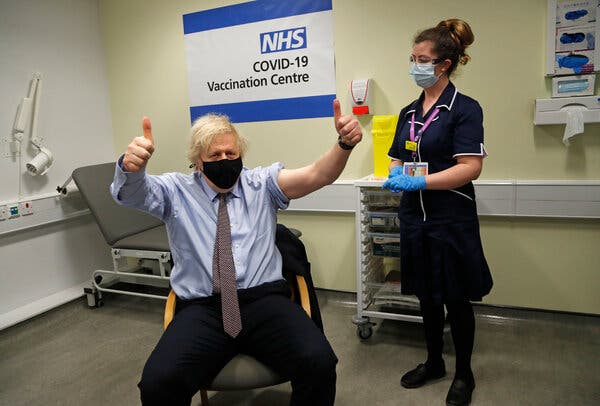 Amid a vicious wave of Covid-19 in Europe, the safety concerns have delayed inoculations, sunk confidence in the shot and created a patchwork of different policies across the continent. The most devastating effects of the safety scare, though, may yet fall on poorer nations entirely reliant on AstraZeneca’s vaccine.

The concerns have arisen even though the clots are exceedingly rare. As of Sunday, officials said, European regulators had received reports of 169 clots in the brain and 53 other clotting events, often combined with low platelets, among roughly 34 million people who had received the AstraZeneca vaccine across Europe.

Britain has purchased enough vaccines from multiple makers that the policy change on AstraZeneca should not significantly slow the pace of inoculations. But other countries are starved for doses. Cameroon and the Democratic Republic of Congo have already delayed injections of AstraZeneca’s vaccine amid mounting concerns in Europe. Any further hesitation, scientists said, could cost lives.

“In developing countries, the dynamic is to either use the vaccine you have, or you have nothing,” said Penny Ward, a visiting professor in pharmaceutical medicine at King’s College London. “In which case, carnage ensues.”

For the vast majority of people, British and European regulators said on Wednesday, the benefits of AstraZeneca’s shot far outweigh the risks. The clotting problems were appearing at a rate of roughly one in 100,000 recipients across Europe. Meanwhile, in Britain, the vaccine has driven down hospitalizations from Covid-19 — which can, itself, cause serious clotting problems — and saved thousands of lives, regulators said.

British health officials estimated that the risk of being admitted to an intensive care unit for Covid-19 exceeded the dangers of the unusual blood clots in almost all age groups, and at almost every level of outbreak.

But because younger people are less likely to develop severe Covid-19, regulators said, any vaccine being given in that age group has to clear a higher safety bar. British data also suggest that younger people are more prone to the rare clots, making health officials there and in Europe warier about giving them the vaccine.

In response to the new regulatory guidance, Italy on Wednesday recommended not giving the AstraZeneca shot to people under 60. A number of countries, including Germany, France, Canada and the Netherlands, had already stopped using it in younger people, setting the age limit at 55 or 60. Norway and Denmark have put a total halt on the shot while they investigate.

“The balance of benefits and risks is very favorable for older people, but it is more finely balanced for the younger people,” said Dr. June Raine, Britain’s chief medicines regulator.

The blood clots have drawn heightened concern because of their unusual constellation of factors: blockages in major veins, often those that drain blood from the brain, combined with low platelet counts.

The emergence of the cases in early March presented countries with among their most serious regulatory tests since shots were first administered. In vaccinating millions of people, problems were inevitably going to arise that were too rare to appear in clinical trials involving thousands.

But while scientists pleaded for coordinated action, health officials across Europe defied the recommendations of the European Medicines Agency and suspended injections of the AstraZeneca vaccine. Most resumed the shots a few days later.

Some experts said the pauses were understandable, but the flip-flopping was disorienting, all the more so amid an ugly squabble between European lawmakers and AstraZeneca over drastic reductions in supply that prompted some political leaders to falsely malign the vaccine. Surveys began to show that in Germany, France and Spain, most people doubted the vaccine’s safety.

Over all, use of the shot has suffered: Across Europe, 64 percent of delivered doses of AstraZeneca’s vaccine have been injected into people’s arms, markedly lower than the rates for other shots.

“One hoped there would have been collaboration, and more discussion, between regulators, instead of lots of different countries going off in all sorts of directions,” Professor Ward said. “That aspect has really been the most unhelpful.”

As doctors across Europe have investigated the rare blood clots, they have become more convinced of a link, however poorly understood, with the vaccine.

The inoculation appeared to be triggering an immune reaction targeting platelets in small numbers of people, doctors and regulators said. The platelets, in turn, were causing dangerous clots in different parts of the body, including in the brain, leading in some cases to a rare type of stroke.

But why some people generated platelet-targeting antibodies is not known, doctors have said. Some component of the vaccine, or an excessive immune reaction in certain recipients — or both — could be the cause. No pre-existing conditions are known to make patients more vulnerable.

More women than men have suffered those clotting problems, but British regulators said that appeared to be a result of women being vaccinated in higher numbers because of frontline medical roles.

Regulators have asked vaccine recipients and doctors to watch for certain symptoms, including severe and persistent headaches and tiny blood spots under the skin. Doctors’ groups have circulated guidance about how to treat the disorder.

As of March 22, regulators had carried out detailed review of 86 cases, 18 of which were fatal, they said.

Concerns about the shot became acute enough in Britain this week that the University of Oxford, which developed the vaccine with AstraZeneca, stopped giving doses as part of a two-month-old trial in children.

“Safety has been our priority throughout the development of the vaccine,” Andrew Pollard, the Oxford researcher in charge of the trials, said on Wednesday. The identification of the clots, he added, “shows that the safety system works.”

In the United States, AstraZeneca is preparing to apply for emergency use authorization from the Food and Drug Administration. If and when they take up the application, that agency’s regulators are expected to scrutinize the clotting cases.

The United States, flush with vaccines from three other makers, may not ultimately need AstraZeneca’s shot. But any ruling by the F.D.A. is expected to hold considerable weight in some of the poorer nations that are relying on the shot.

The World Health Organization said that a vaccine safety subcommittee had met on Wednesday and noted that “rare adverse events following immunizations should be assessed against the risk of deaths from Covid-19 disease and the potential of the vaccines to prevent infections.” It said that a link with the clotting problems, while “plausible,” had not been confirmed.

For Britain, the AstraZeneca vaccine has become a huge source of national pride, and the backbone of the country’s speedy inoculation program.

Even if younger people are at lower risk from severe Covid-19, scientists have said, inoculating them remains essential to creating enough protection in the population to end the pandemic.