Mikel Arteta kept his domestic cup record intact as Arsenal proceeded to the last eight of the Carabao Cup on penalties, Joe Willock scoring the crucial kick in the sudden-death phase after Harry Wilson had seen his effort saved.

That was hard on Wilson, making his first start for Liveroool since returning from loan, though Divock Origi and Mohamed Elneny also saw shots saved in the earlier section, and Arsenal goalkeeper Bernd Leno deserved something for his saves in normal times that took the contest to a shootout decider.

Liverpool and Arsenal must be tired of meeting each other, or perhaps they are just tired. Despite being altered beyond recognition from their game earlier in the week, these shadow squads did little more than shadow box for the 90 minutes of normal time.

Leno did well to keep the scores level until penalties could provide a conclusion but long before the end it appeared unlikely that either side would summon the energy or the urgency to produce a decisive moment from open play.

Arsenal might have taken an early lead when Eddie Nketiah found himself with a shooting chance on the six-yard line after eight minutes, though he hesitated a fraction too long and Adrián was able to extend an arm to flick the ball away from his feet. 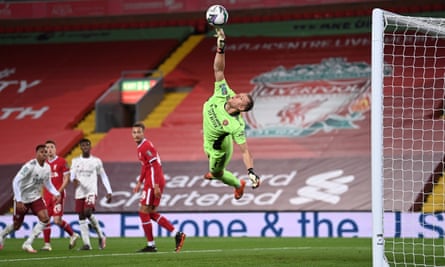 Arsenal’s goalkeeper Bernd Leno was given the man of the match award after a string of impressive saves inside the 90 minutes. Photograph: Laurence Griffiths/EPA

Both sides made wholesale changes from the league game at Anfield on Monday, though the visitors had a slight edge in experience. They boasted the new England call-up Bukayo Saka at left wing-bac and it was a foul on the teenager that earned Takumi Minamino the first booking.

When Minamino brought down Nicolas Pépé after losing the ball on the half hour he was therefore living dangerously, though Kevin Friend contented himself with only a word of warning.

Mohamed Salah, one of the few survivors from three days ago, was probably Liverpool’s most dangerous attacker in an uneventful first half. For the most part Saka looked after him quite well when he stayed on the wing, it was his regular incursions infield that seemed most likely to cause Arsenal problems, though he clearly does not share the same sort of understanding with Diogo Jota and Minamino that he enjoys with Roberto Firmino and Sadio Mané.

All the drama in the first half was packed into its final minute. First Dani Ceballos got away with a rash tackle on Jota that must have been outside the area by a matter of millimetres, then when Arsenal failed to clear the free-kick a Jota header brought a one-handed save from Leno, with Minamino arriving at speed to volley the rebound against the bar. It was the clearest chance so far but a difficult one, with the ball at an awkward height and Minamino having no time to readjust his position.

While Liverpool had probably applied more pressure to their opponents’ goal than Arsenal had managed in terms of scoring opportunities neither side had looked particularly threatening. 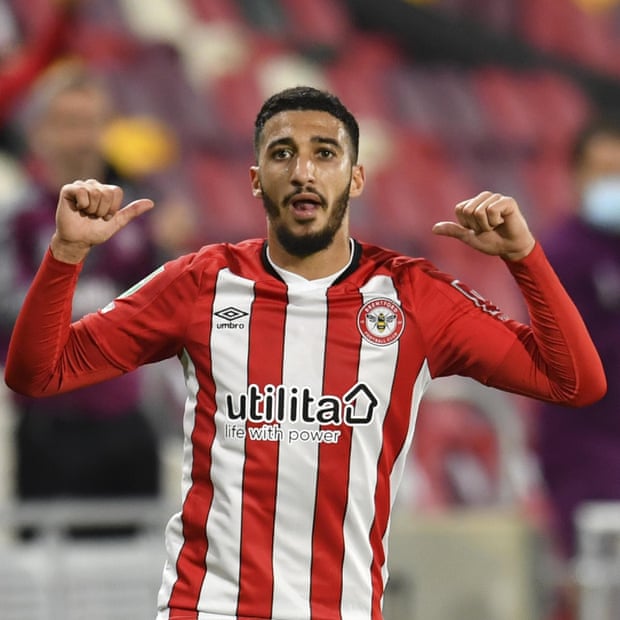 Saïd Benrahma gave his Premier League suitors a nudge as Brentford gained some revenge for their play‑off final defeat with a 3-0 Carabao Cup victory over Fulham.

Benrahma, the star of Brentford’s promotion bid last season, scored twice as the Bees reached the quarter-finals for the first time in their history.

The Algerian midfielder has been linked with a host of top-flight clubs but, with an expected move yet to materialise, he was given his first start of this season, and he took his chance in style.

What Brentford would have given for a performance like this two months ago, when they were pipped to promotion by their west London rivals in the Championship play-off final at Wembley. Defeat meant more misery for the Fulham manager, Scott Parker, whose side have lost all three matches upon their return to the top flight.

Parker made 10 changes to the side thumped by Aston Villa on Monday and they were inches away from taking a 10th-minute lead when Neeskens Kebano whipped a 25-yard free-kick round the Brentford wall and against the crossbar.

Instead Brentford went ahead eight minutes before half-time with the debutant Saman Ghoddos the architect. The Iran midfielder took advantage when Jean Michaël Seri lost possession, found space down the right and squared the ball for Finnish youngster Marcus Forss to slam home.

Parker sent on Ademola Lookman for his debut at the break and the former Everton winger, on loan from RB Leipzig, injected some urgency into their attack.

However, Benrahma doubled the lead when he arrived at the far post to convert Ethan Pinnock’s header across goal. Last season’s star performer then killed Fulham off with a stunning turn and shot for what could yet be his final goal in Brentford colours.

Last season’s finalists, Villa could not follow up their fine league form as they went down 1-0 to Stoke. The former Wolves forward Sam Vokes scored the only goal of the game midway through the first half. Jack Grealish and Tyrone Mings – included in the England squad for the matches with Wales, Belgium and Denmark – were not involved. Guardian sport

Leno came to Arsenal’s rescue agains at the start of the second half when a corner fell to Virgil van Dijk and he stabbed a shot goalwards from a couple of yards out. There was no great power in the effort but it was heading for the bottom corner until the goalkeper got down smartly to his right to push it away.

Jota hit a deflected shot wide and Marko Grujic headed the wrong side of the post then brought another save from Leno as Liverpool began to dominate, at which point Jürgen Klopp stuck to his original plan and brought off Sala and Van Dijk after an hour, removing the only two outfield players who had started in the last game.

The pattern did not change, Leno was still needed to keep out attempts by Jota and Grujic, and if anything Liverpool stepped up their pressing game with Divock Origi on the pitch, yet an excellent covering tackle by Neco Williams was necessary to prevent Saka scoring against the run of play.

Pépé and Nketiah also had chances before the end, and Joe Willock had a penalty appeal turned down in stoppage time, but by then a shootout was already looming.

Neymar is out for three weeks due to injury. He will miss the match with Leipzig in the Champions League
Goretzka is the German GQ sportsman of the year. He is awarded for fighting racism and the pandemic
Bartomeu deleted his Twitter account after leaving Barca. He and his family received threats
Gennady Orlov about Khabib: Won-well done, but he's not the greatest
Forward Alaves Joselu: Barcelona is one of the best teams in the world. But they can be beaten
In England, they want 25% of coaches and 15% of managers to be from ethnic minorities. Only Southampton did not sign up
Zlatan okovide: the Virus challenged me and I won. But if you are not Zlatan, then do not risk it and think with your head
Source https://www.theguardian.com/football/2020/oct/01/liverpool-arsenal-carabao-cup-match-report

Wall Street soared under Trump, but it's been a rocky ride

Seven affordable homes in Blackpool currently on the market for less than £60,000

'So frustrating': Grave missteps seen in US virus response

Jeremy Corbyn calls for supporters to 'stay in party'

First iPhone 12 Mini hands on shows that it is very, very small

The cannabis factories found in Wales this year

‘Obsessive’ patient who stalked his dentist with crossbow jailed again

Cyprus and Lithuania are now on the quarantine list for Brits

Public have ‘civic duty’ to report neighbours for breaking rules

Phil Parkinson on Aiden McGeady's chances of a Sunderland recall

Wigan 'experiencing pandemic differently to the rest of Greater Manchester'

The spookiest place in Lancashire has been named based on paranormal sightings, cemeteries and abandoned homes

Mum gives birth to quadruplets after struggling with fertility for years