Cities across the US have enacted curfews in an attempt to quell the unrest over the killing of George Floyd in police custody. But the selective enforcement of the curfew orders only underscores the demonstrators’ message about law enforcement abuses, civil liberties experts warn.

The vague, broad language in these orders gives law enforcement leeway to pick and choose when to arrest someone for violating curfew, allowing for situations that are ripe for abuse, experts said. In some cities, this has worked in protesters’ favor when police chose not to arrest them. But when police enforce an order in some cases and not others, the order becomes an arbitrary tool of control that often appears to violate protesters’ constitutional rights to assembly and free speech.

“The amount of discretion and the ways these laws are written are perpetuating the same injustices that our communities are out there protesting right now,” Shilpi Agarwal, a senior attorney at the American Civil Liberties Union of northern California, told the Guardian. “The thing that has inspired these protests and triggered this pain in folks is this flagrant abuse of power by police. The response to that should not be to further empower the police.”

In some locations, police have appeared to give certain people a free pass. In Salem, Oregon, the police chief was forced to issue a public apology after an officer was filmed Monday telling armed white men to duck into businesses or vehicles once curfew hits so “we don’t look like we’re playing favorites”.

Elsewhere, police have treated curfew deadlines as a “flexible tool”.

In Los Angeles, where a curfew was in effect until Thursday, the sheriff’s department tweeted that they would not begin enforcing the curfew until 10pm, though the countywide curfew began an hour earlier.

The Los Angeles sheriff, Alex Villanueva, described the curfew as an “advantage” for law enforcement because “anyone who is present we have the probable cause to arrest, and we are making arrests by the hundreds”. Since Friday, police have arrested more than 3,000 people in Los Angeles county, the majority of which were for failure to disperse or breaking curfew.

In Oakland, where a curfew was also in effect until Thursday, the interim police chief, Susan Manheimer, said officers “chose not to enact the curfew” at demonstrations that drew hundreds out because they had remained “peaceful”. She described the curfew as “a flexible tool that will be applied with discretion”.

“That’s not how the law works nor is that how the constitution works,” Agarwal said. “Laws have to be clear about what is prohibited or not. We need to know as citizens what actions we can or cannot do, what crimes are or are not allowed. We can’t give police the license to decide who or who not to arrest.” 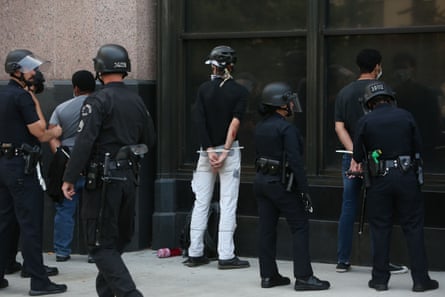 Local leaders across the country have justified these curfews by pointing at the looting and vandalism that have accompanied the protests and marches, calling the curfews a matter of public safety. But prior to the lifting of the curfew in Los Angeles county – and a lawsuit filed by the ACLU and Black Lives Matter Los Angeles – the sheriff had said that the curfew “will continue on a daily basis until the organized protests are gone”.

“It’s quite clear that the curfews are being enacted in order to quell protest,” the civil rights attorney Rachel Lederman told the Guardian.

A curfew is a very drastic measure... Every citizen should be afraid of the precedent that this is setting

Lederman was the attorney who led a lawsuit against San Francisco during one of the only other times in recent history that the city enacted a curfew – after the verdict in the Rodney King case was announced in 1992. In 1996, the ninth circuit ruled that “the law is clear that first amendment activity may not be banned simply because prior similar activity led to or involved instances of violence”.

“Banning or postponing legitimate expressive activity because other first amendment activity regarding the same subject has resulted in violence deprives citizens of their right to demonstrate in a timely and effective fashion,” the ruling reads.

San Francisco lifted its curfew on Thursday, though not before arresting a number of protesters, many of whom set out to purposely defy it. Lederman pointed out that before the 1992 curfew, the last one in San Francisco was in 1968, after Martin Luther King Jr was assassinated. But the city didn’t impose a curfew following the mass outrage over the verdict in the killings of LGBTQ+ leader Harvey Milk and the mayor George Moscone, two white men, or when sports fans destroyed much of the city and set a municipal bus on fire while celebrating the San Francisco Giants’ 2012 world series win. “It’s targeted at black-led, anti-racist protests,” Lederman said.

What was particularly concerning, said Agarwal, was that many jurisdictions such as Palo Alto and San Mateo county had enacted a curfew but hadn’t experienced any sort of vandalism or looting. “Cities across California were just leaping to enforce these very drastic measures based on what they were afraid might happen,” she said.

Agarwal said she was worried about the future implications of these curfews.

“A curfew is a very drastic measure that should be reserved for very extreme circumstances,” she said. “Every citizen should be afraid of the precedent that this is setting.”

Juventus and Atletico have started talks about the transfer of Lacazette. Inter are also Interested in him
Rangnik agreed to take charge of Milan from the 2020/21 season. He can also take the post of sports Director
Ocampos did everything for the victory of Sevilla: first he scored, and then he put on a goalie's Jersey and in the 101st minute dragged the kick of the goalkeeper Eibar
Pizarro finished his career as a player. Werder's players cradled him in their arms after the match
Aitor Karanka: When Real Madrid wins, they always talk about the referees
Gendusa two weeks training with Arsenal according to the decision of Arteta. Londoners can sell it
Alexander Elagin: if you Want to live a man with a man, a woman with a woman-live! But don't involve children
Source https://www.theguardian.com/us-news/2020/jun/05/george-floyd-protests-curfew-rules-arrests