Keir’s Starmer’s deputy has said voters did not know what the Labour leader stood for in the recent election campaign.

Angela Rayner also admitted she had “frank” and “robust” conversations with Sir Keir, days after she emerged from a reshuffle with a clutch of new roles.

Many Labour MPs believe Sir Keir’s authority was diminished over the weekend when a backlash against reports Ms Rayner had been demoted saw her given a new 24-word-long job title.

The reshuffle was prompted by Labour’s defeat in last week’s by-election in Hartlepool.

In an interview with the BBC, Ms Rayner said: “What I heard on the doorstep is they (voters) didn’t know what Keir Starmer stood for. So that’s what I think our challenge is… It’s not.. people briefing saying ‘we think Keir thinks this’… but actually about what are we doing? What are our policies around that?” 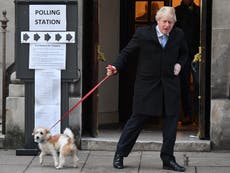 She admitted that “people want to know what the Labour Party’s going do for them, and that we’re not squabbling with each other” as she insisted she had a good working relationship with her party leader.

But while she joked that her hair colour had led her to be labelled “fiery” as a child, she added: “I can shoot from the hip...And, you know, Keir’s a very measured person. So actually, we work incredibly well, on that basis, because, you know, we bounce off each other, we kind of spark off each other, because we are different. We’re not competing with each other, we both bring something unique to that partnership.”

In an interview with ITV news, Ms Rayner declined to go into the details of her discussions with the Labour leader.

But she said: "Everyone knows I’m quite a trade union negotiator, and a robust talker, and Keir is very frank with me and I’ve really enjoyed the fact we’ve had that constructive open relationship and I’m pleased that will continue.”

Ms Rayner also admitted that Labour had in the past got the "tone wrong" and sounded patronising to voters.

"I’ve talked about the patronising tone that we have sometimes actually, and I’ve felt that as a working class girl. We don’t want people to do things for us, or tell us what to do we want the empowerment to do things for ourselves."

In both interviews, Ms Rayner also suggested that she had been appointed to her new posts because she wanted to be more "front-facing".

At the weekend she was stripped of her roles as party chairwoman and campaign co-ordinator.

Earlier this week Sir Keir and Ms Rayner were spotted having a cup of coffee in Westminster, as they sought to draw a line under speculation of divisions between them.

But just hours later Sir Keir’s closest parliamentary aide Carolyn Harris resigned, after MPs suggested she had exacerbated tensions between the leaders’ office and his deputy.