Ange Postecoglou needs no reminding about where the major threat will come for Celtic in midweek because he sees it every time he watches his national side.

Martin Boyle has gone on a tear-up since opting to play for Australia with five goals in nine games for the Socceroos.

When the Hoops head to Easter Road to face Hibs in midweek, their Aussie gaffer will already be well versed in the threat posed by the winger.

Boyle is just one of the reasons Postecoglou sees the Hibees – and Hearts – as serious competitors in the Scottish Premiership title race.

The Celtic manager joked last week about his team being written off for the title due to poor early season form. He said: “I know Martin really well. I was pretty pleased when he chose to play for Australia because there was a bit of an arm wrestle when it came to who he was going to play for.

“He’s done really well for the national team so I’m well aware of him.

“He’s a good player and it’s not easy playing for Australia. Unlike other national teams, he’s got to do long-haul travel and getting back to this part of the world isn’t easy so he’s handled that really well.

“It’s my first foray into Easter Road on Wednesday night so I’m looking forward to it.

“Are Hearts and Hibs in the title race? I can only go on what’s going on at the moment so I’d have to say, yes. Why not?

“There is a historical context to these things and a script already written where people assume it will be followed every year.

“But it wasn’t that long ago that Leicester won the Premier League.

“I always think if you take football for granted or think you know the script, it invariably gives you an almighty slap in the face.

“At the moment there are four or five teams close together and they’ll all think they’re capable of having success this year.

“I see no reason why you would discount any team up there until evidence shows you otherwise.

“Every away game has been daunting for us so far. I know we’ve won our last two on the road but a few weeks ago people were telling me we hadn’t won away since Valentine’s Day. 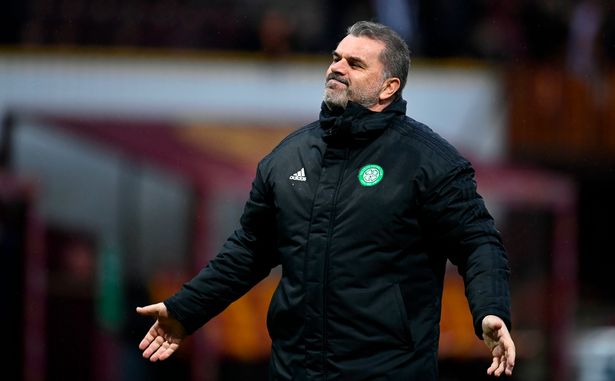 “I understood every away game was a challenge for us until you dispel that.

“This week at Hibs won’t be any more difficult or any easier. Part of the uniqueness of this league is that every game is competitive.

“You know you’re in for a battle and we’ll get that at Hibs but if we replicate the performances we had against Aberdeen and Motherwell away, hopefully we’ll get a result.”

Celtic have progressed under Postecoglou in a period of transition at the club and there have been bright sparks including new loan star Jota and rejuvenated full-back Anthony Ralston.

The Hoops boss confirmed the club are speaking to Ralston about a contract extension already, while insisting that Jota has found a home at Parkhead after a difficult stint in Spain last year. He said: “In terms of Tony, Michael Nicholson (interim chief executive) is in charge of that area.

“My focus is trying to make sure that Anthony continues his development because he’s been fantastic.

“Contract negotiations will take care of themselves. There’s very little need to feel angst about it.

“The club has a lot of faith in Tony. That’s why they gave him a new contract before I even started here.

“I gave him a chance and you’d have to say he’s grabbed it with both hands so far.

“With Jota and the details of the loan deal, there is an option there for us.

“He loves playing at this club, in front of 55,000 at Celtic Park and the challenges that come with that.

“The decision on his future, there’s no rush with it. Firstly, it’s about the priorities for the club and then the player.

“This was an important move for him. He’d already had a loan in Spain that didn’t really work out.

“Why wouldn’t he want to stay? He’s running out in front of 55,000 people, scoring goals, putting on worldie assists, so he should be feeling pretty good about life.

“He had a tough time in Spain so he understands he’s in a good place now.”

Postecoglou is still without left-back Greg Taylor and with Boli Bolingoli not in their Europa League squad, Adam Montgomery has a golden opportunity to make the position his own.

The boss insists nobody is guaranteed a start. He said: “I’d hate to think anyone thinks they’re first choice, especially not a 19-year-old like Adam in his first season.

“We also have Liam Scales and Josip Juranovic is fit again so we have options.”