Andy Murray eased back into competition for the first time since early March as he and his fellow Briton Liam Broady pulled off an excellent 5-7, 7-6 (5), 10-6 victory against the Australian pair Luke Saville and Max Purcell in their doubles first0-round match at the Italian Open in Rome.

Murray had travelled to Rome only to train with top players ahead of his singles return, but he and the much improved Broady were surprise late entrants in the doubles draw after numerous withdrawals. They handled themselves well against the doubles specialists, recovering from a set and break down to win.

As he tries to rediscover his form under pressure, Murray notably looked comfortable and fluid in his movement around his half of the court and he heavily influenced the match as it endured.

Earlier in the day, Murray was a talking point in the Roland Garros official press conference due to the elusive question of whether he will receive a main-draw wildcard for the tournament. The French Open tournament director, Guy Forget, believes that Murray “sure deserves one” but that he would not request a wildcard for Roland Garros unless he is certain he can compete with the best players. After discussions with Murray’s team, the tournament will decide on its wildcards next week.

“Andy has tried his best to come back,” said Forget. “His knowledge and experience is so big that if he feels physically fit and he can afford to play a few matches before Roland Garros, I believe that he can beat probably half of the people in the main draw. Andy’s not going to pretend to play a tournament if he doesn’t feel he can compete with the best guys.”

The Roland Garros organisers also announced the conditions for this year’s tournament. The event, which begins on Sunday 30 May, will host up to 5,388 fans for the first 10 days until Tuesday 8 June, with Court Philippe Chatrier capped at 1,000 spectators and grounds split into six zones. From 9 June, up to 13,146 fans will be allowed and 5,000 on Philippe Chatrier. Spectators will have to present a “health passport” in order to enter from 9 June.

In its second year with a roof and floodlit courts, the 2021 event will also mark the first time Roland Garros stages a night session. Because of the current curfew in Paris, those sessions will be behind closed doors until 9 June. Prize money will be reduced slightly this year, down from €38m to €34m.

In Rome singles action, Serena Williams was unable to mark her milestone 1,000th WTA match with a victory and she was defeated 7-6 (6), 7-5 by Nadia Podoroska of Argentina.

Williams was competing in her first match since her Australian Open semi-final defeat against Naomi Osaka three months ago and the combination of rust and lack of recent experience on red clay was insufficient against Podoroska, a strong clay-court player who reached the Roland Garros semi-finals last year. 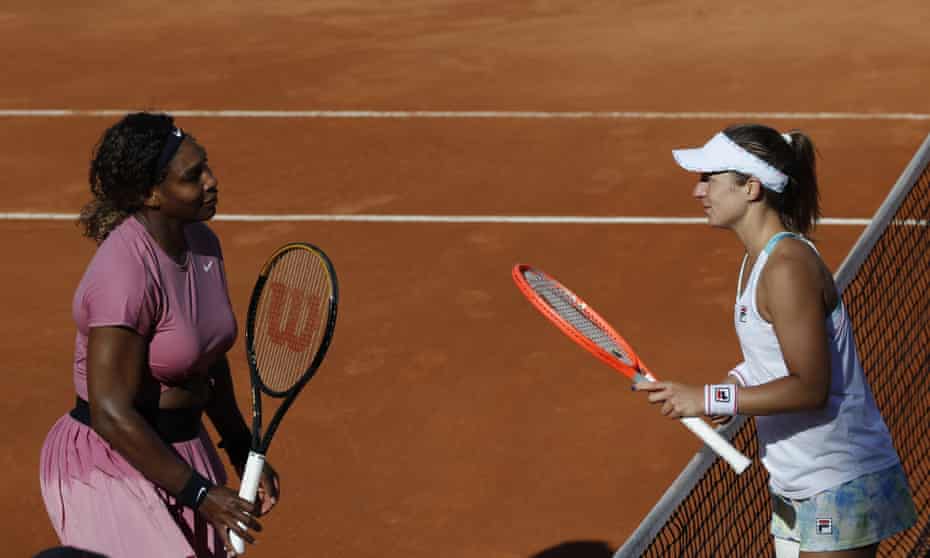 Afterwards, Williams was satisfied with her effort, noting the necessity of returning to match rhythm, even though it ended with a loss. Williams has since taken a wildcard into a WTA 250 tournament in Parma next week.

“I think it’s good because I feel like sometimes, I’m not playing as many matches,” Williams said. “I’m just doing a lot of training. So it’s actually really good to get out and to play some matches.

“I usually don’t take this much time off on a clay-court season, usually I play a Charleston or a Madrid or somewhere. So my season doesn’t usually start this late on clay. But the training isn’t for nothing, so I know that it’s just a matter of time.”

Meanwhile, Simona Halep’s Roland Garros appears to be in doubt after she was forced to retire from her second-round match with a calf injury while leading Angelique Kerber 6-1, 3-3.