When the President-elect Joe Biden gives his inaugural address on Wednesday, one former president will tower above all others, and not merely because of his celebrated stovepipe hat.

Abraham Lincoln is always famous, but he turns into something more than that when Americans are bitterly divided. In moments of crisis, he becomes a kind of guardian angel, not unlike the phrase he was looking for when he closed out his own inaugural address in 1861. Given “guardian angel” by his adviser, the New York senator William Seward, he improved it to “better angel”.

So surely did he find the moment that politicians are still laboring to come up with anything new. After the Capitol putsch of 6 January, the House minority leader, Kevin McCarthy, lamely called on Republicans to find their “better angels”, after they sought to garotte the vice-president.

Centuries from now, archeologists may have trouble piecing together the values that drove the US between 2017 and 2021. There may be a few signs – a golf cart here … a My Pillow there … and all of the phones, by the millions, rusting in the shallow waters that cover Washington, with just the statue of Armed Freedom pointing above the waves.

But the actual ethics of this complex society may be elusive, as remains the case with other four-year realms.

That is why Lincoln still speaks to us, unlike so many presidents. His moral compass worked. He was elected at a time when no one in their right mind would have wanted the job. Despite constant hatred from his enemies, he fought to unite Americans and in doing so he restored a measure of racial justice. He reminded them that their own words were important, and the truth mattered. That helped the country live up to its ideals, as expressed in the declaration of independence. He did all of these things while writing in a kind of prose poetry that still sounds musical.

Lincoln delivered two inaugural addresses, each clairvoyant about problems the nation would face. In 1861, he asked Americans not to go to war; in 1865, he asked them to come back together, “with malice toward none; with charity for all.” Those two speeches, standing like bookends at the beginning and end of the civil war, feel especially relevant in the dark winter of 2020-21, when charity is in such short supply.

Lincoln appeared briefly on 6 January, the night of the Capitol putsch, as Biden quoted from the 1862 annual message, in an attempt to calm the waters.

It would not be surprising if Lincoln returned during the inaugural address at the Capitol on 20 January. In 1861, the Capitol was already a battleground, filled with treasonous southern politicians who had stayed in Washington while their colleagues were leading an effort to launch a new country, founded upon slavery. Lincoln deftly walked through those landmines, delivering an effective speech that pleaded for Americans to remain a single country. It was a lawyer’s speech, rejecting the argument for secession, but it included a poet’s peroration, the final paragraph in which Lincoln asked the south to pause before separating.

“We are not enemies, but friends,” he wrote, in language that would sound just as resonant in 2021. “We must not be enemies.”

Four years later, Lincoln returned for another inaugural. This time he was more preacher than lawyer, seeking to explain the shocking sacrifice of 750,000, a number we continue to revise upward. Americans badly needed a message of redemption.

Lincoln found it, using his gift for language and some stagecraft too. Behind him, the same Capitol that had looked so forlorn four years earlier was now completed, with a sparkling new dome and that curious statue on top – cast by an African American liberated by Lincoln. As the president spoke, he stood next to a table constructed from materials used to complete the dome.

But Lincoln was too honest to simply say good had prevailed over evil. With a deceptive simplicity – there were only 703 words, 505 with one-syllable – he delivered a kind of theological self-assessment unlike any other presidential speech. It acknowledged blame for “American slavery” – notably, he did not say “southern slavery”. But it also accused slavery’s defenders of a gaudy and insincere patriotism, fortified by violence rather than truth, as evidenced by their willingness to “make war rather than let the nation survive”. In the end, resorting to violence was a shabby way to promote democracy.

Lincoln quoted the Bible liberally, to explore the ways in which Americans might atone for their sins. That was new territory for a president, especially one with unconventional views of his own. But Lincoln’s faith had intensified, perhaps in some measure because of his own severe trauma as the parent of a beloved child who died. After proposing that God might have wanted the civil war to come, to atone for the crime of slavery, Lincoln softened again, as he did at the end of the first inaugural.

He concluded by asking Americans to be gentle with each other, to take care of the widows and orphans dotting the landscape, and the amputees attending the ceremony. African American soldiers were out in force as well, as seen in one striking photograph from that day. 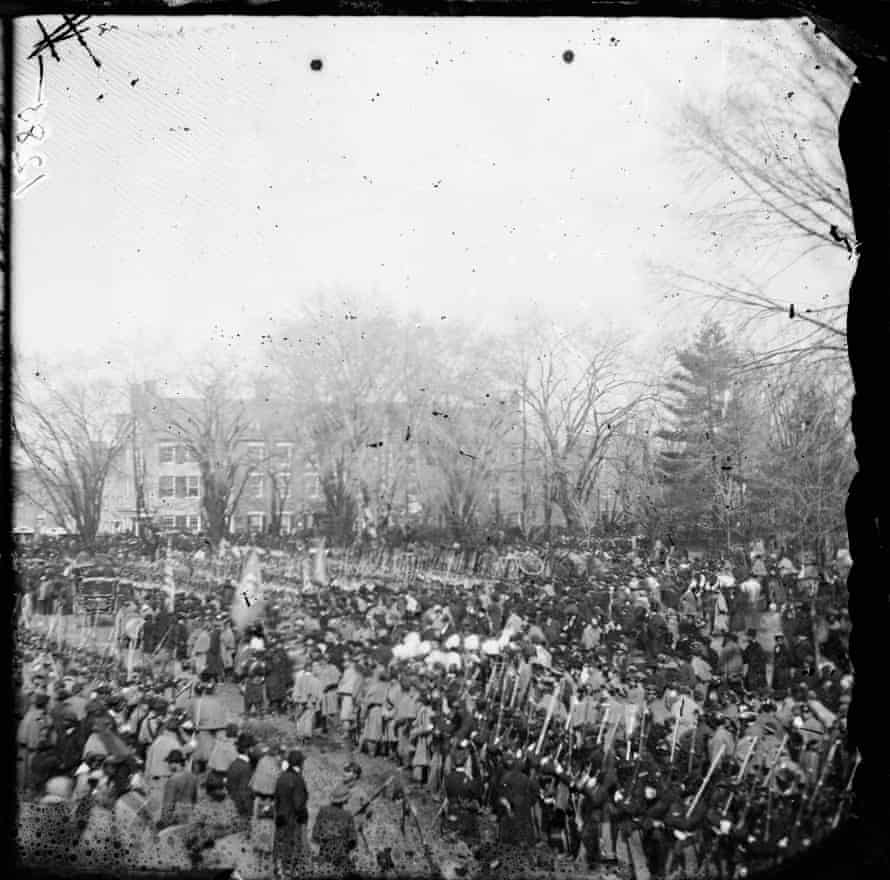 That was another improvement: African Americans were not allowed on the grounds of the Capitol at previous inaugurations.

In 1865, as recounted by a fine book, Edward Achorn’s Every Drop of Blood, many distinguished Americans attended. Among them were a well-known actor, John Wilkes Booth, and a leading African American author, Frederick Douglass, each feeling quite differently as Lincoln summoned a kind of Old Testament anger against the sin of racial injustice. Lincoln and Booth both loved Shakespeare. Booth may have felt he was on another stage, contemplating the murder of a Caesar, likewise killed in a Capitol.

That tragedy played out six weeks later. But Booth could not extinguish Lincoln’s words. Instead of giving Americans a simplistic message of self-congratulation, Lincoln had delivered a sterner measure, one that offered the tools for self-salvation. In a country still struggling to live up to its ideals, that remains a potent message.

Ole Gunnar Solskjaer: Manchester United don't get a penalty after a month or two ago there was a fuss about it. Coaches influence referees
Klopp on 2:0 Sheffield: Many have written off from the accounts of Liverpool. We need to win, we can't get to the Champions League without it
Milan scored their 15th penalty of the season in Serie A - the most in the league. Before the record-three 11-meter
Liverpool scored 7,000 th goal in the top division of England - only Everton has more
Manchester United have 0 wins and 1 goal in 7 matches against the big six this season in the Premier League
The Hudson-Odoi hand show: Maguire said the umpires were told it was a penalty. VAR baffled us
Jota misses the match with Sheffield due to illness, Alisson-due to the death of his father
Source https://www.theguardian.com/commentisfree/2021/jan/16/abraham-lincoln-better-angel-joe-biden-inauguration