(CNN)"The Beatles: Get Back"sets a very high bar for musical nostalgia, but "My Life as a Rolling Stone" is no slouch, with extensive access to who's who of the three surviving members and Rock's voice acting as the chorus. to divide the four band members into their own dedicated time.Yes, you can't always get what you want, but for Rolling Stones fans, this should be close.

Interviews narrated by Sienna Miller in this documentary, broadcast on the BBC in the UK and Epix in the US Mick Jagger, Keith Richards and Ronnie Wood is on camera, but remains an off-camera voice for musicians, managers, and others with insight into the band, keeping the Stones squarely in focus.

The opening article (dedicated to Jagger, of course) describes the group as "the link between the 1960s counterculture and the commercial modern world."

There is biographical material that focuses on their musical influences. For example, as one observer put it, Jagger, the clear leader and "brand his manager," studied Little He studied Richard in learning how to conduct the stage, and so on. Jon Bong also included creating his stadium experience The Rock, as Jovi refers to it. 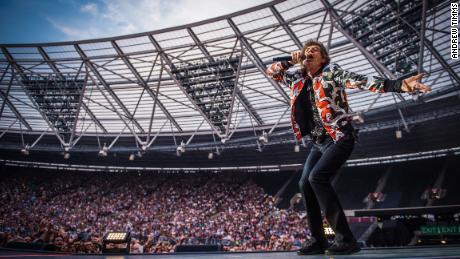 Mick Jagger's performance as seen on "My Life as a Rolling Stone."

Jagger claims that he was actually naive about the effects of his androgynous appearance ("I consider myself androgynous. I didn't even know I was doing it."). The Beatles and their surge in popularity in the 60s gave birth to the Stones.

"Without the Beatles, there would be no Stones," he says.

Richards Hour is a "rebellious hedonist" and substance abuser, as well as a pioneer who helped create the band's sound and image: Slash of Guns 'N. It details his reputation as a "model" in the most colorful way ever. The Roses have said, "All of us rebellious rock guitarists follow suit."

Wood, meanwhile, was presented as the glue that held the Stones together after replacing Mick Taylor in the mid-1970s, putting his ego aside to deal with a high-maintenance partner. . The final installment pays tribute to the late drummer Charlie Watts, who passed away in 2021. "He's the best drummer England has ever produced," says Richards.

Executive producer Steve Condi and his four directors don't cover up the controversy and excesses surrounding the Stones, but their artistry and his still-unwavering '70s-personality. The emphasis is clearly on celebrating longevity.

These decades in the spotlight and the wealth of footage associated with it will benefit filmmakers, if not the members themselves.

"Some people can take it, some people can't," Jagger says of the pressures that come with fame. "It's a little deal with the devil."

"My Life as a Rolling Stone" encourages a certain amount of empathy for these demons, but for the most part it's decades old. An appreciation for the magic of rock on all levels.

"My Life as a Rolling Stone" will premiere on his Epix on August 7th.