After being pushed back by a year due to the outbreak of coronavirus, the Tokyo Olympics is finally here.

The Games will be like none other seen in the past, with fans prohibited from the venues with Tokyo under a fourth state of emergency.

With fans absent it's the athletes that will take centre stage. And the action is now officially underway, with a jam-packed schedule to complete until the closing ceremony brings an end to the Games on August 8.

With the Olympics taking place in Japan, a large proportion of the action will take place between midnight and 3pm BST for UK viewers.

But not to worry, as Sportsmail will keep you up-to-date with all the latest news and updates right through until the closing ceremony on August 8.

Great Britain win team eventing GOLD for the first time since 1972 after strong showjumping display on final day of competition... and individual medals could follow today 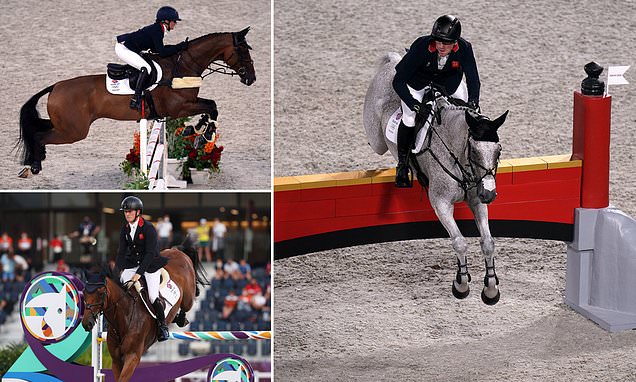 Great Britain's eventers took a glorious gold medal in the team competition in Tokyo. The trio of Oliver Townend, Laura Collett and Tom McEwen prevailed in the final showjumping round after going into the day with a near impregnable lead of 17.9 penalties. Even though that was cut to 13.9 at the end of the night, it was still enough for glory. McEwen was first up in the showjumping, and produced a clear round to get the team off to the perfect start. 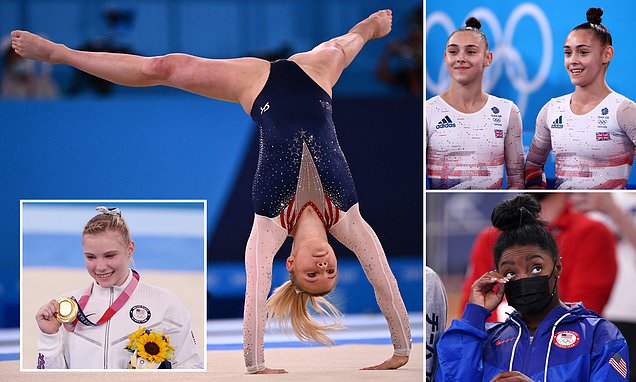 As expected, an American triumphed in the women's floor final - it just was not the one we thought it would be. With hot favourite Simone Biles sitting this out, thanks to ongoing mental health issues, Phoenix's Jade Carey made the most of her chance, delivering a faultless performance at the Ariake Gymnastics Centre. The 21-year-old was a tough act to follow. Next up was Britain's Jessica Gadirova. Who had qualified in fifth place. After a slight early stumble, she recovered well, to score 14.000. 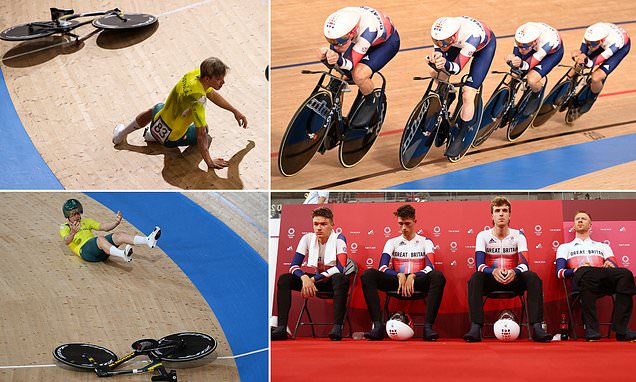 Team GB are still in with a chance of securing a gold medal in the men's team pursuit after finishing fourth in qualifying. The quartet of Ed Clancy, Ethan Hayter, Ollie Wood and Ethan Vernon (bottom right) recorded a time of 3:47.507, which is a British record, but they were two and a half seconds behind world champions Denmark, who finished in top spot with a time of 3:45.014. With Italy in second and New Zealand in third, Britain took the fourth qualifying spot but they were made to wait for confirmation of their progression. Australia were given the opportunity to race again after Alex Porter (left) dramatically fell off his bike due to a handlebar failure before Britain's ride.

Rafael Nadal chides old rival Novak Djokovic for angrily hurling his racket into the stands during Olympic defeat, calling his reaction 'strange' and reminding him he's 'an example for many children' 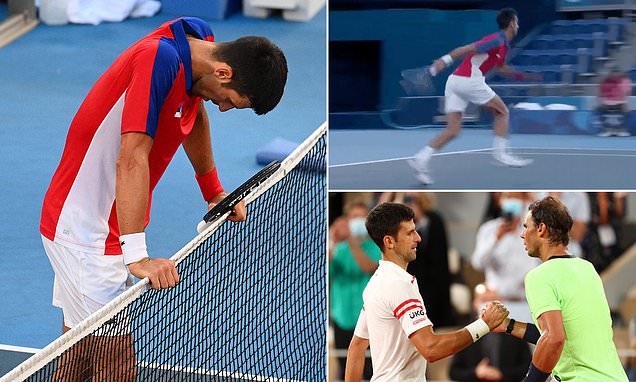 Djokovic has a habit of losing his temper in matches and was thrown out of last year's US Open after unintentionally striking a line judge with a ball. Nadal admitted that the Serbian, who last month drew level with him and Roger Federer on 20 grand slam triumphs, has an unusual way of dealing with his emotions on the court but put his outbursts down to his competitive nature. 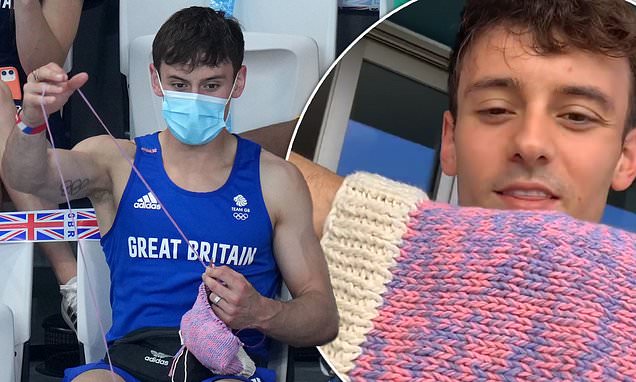 Tom Daley has revealed he was making a dog sweater in the viral photo of him knitting in the stands during the women's diving final at the Tokyo Olympics. The diver, 27, is fresh off his first-ever Olympic gold medal in the men's synchronised 10m platform last week, and decided to get out his needles and wool during the Women's 3m Springboard Final at the weekend. 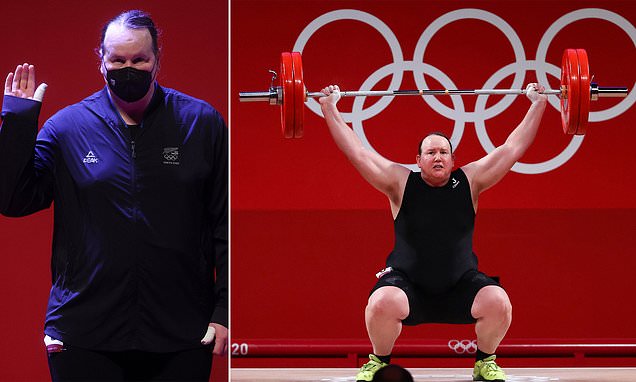 Laurel Hubbard, 43, who gender transitioned in 2012, is competing in the 87+kg category in Tokyo after the International Olympic Committee changed its rules to allow women to compete if their testosterone levels are below a certain threshold (pictured: Hubbard appears on stage today, left and right).She failed with her first attempt at 120kg in the snatch but will have at least another two efforts to make amends. Her appearance in the Games has been mired in controversy and she has refused to speak directly to the media since she qualified. The bookmakers have her priced at 4/9 to decorate her history-making appearance with a medal, although China 's Li Wenwen is the favourite to take the Gold. Whether or not Hubbard stands on the podium, history has been made, and there are many who feel that her participation sets a precedent that will damage women's sport.

British swimmer Adam Peaty has been dismayed by some of the reaction to his announcement that he is set to spend a month away from the pool in order to prioritise his mental health. Peaty won two golds and a silver at Tokyo 2020, including retaining his men's 100 metres breaststroke title, as Team GB claimed a record eight swimming medals, eclipsing their previous best of seven at the 1908 Games. The 26-year-old from Uttoxeter pointed out that the next three years leading into Paris 2024 will be a 'war of attrition' with World and European Championships and the Commonwealth Games all to come in 2022. 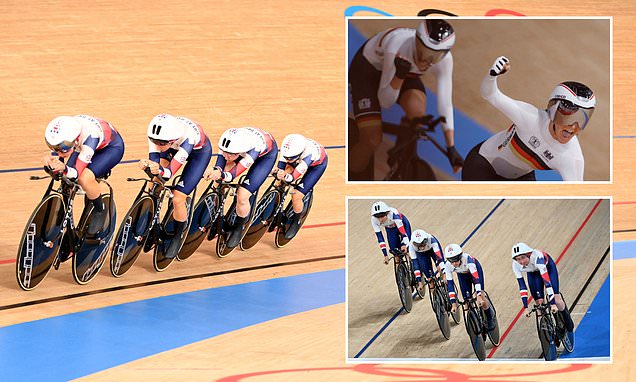 Team GB remain on course to retain their gold medal in the women's cycling team pursuit after qualifying for the first round by going second fastest.  Germany set a stunning pace early on in qualifying after breaking the world record by nearly three seconds with a time of 4:07.307. The team of Laura Kenny, Katie Archibald, Elinor Baker and Josie Knight set off on an excellent pace to try and eclipse Germany's time but  despite starting brightly, struggled late on before finishing second, with four teams advancing from eight in a bid to land a gold medal.

Canadian diver Pamela Ware scores a 0.0 after landing FEET-FIRST in the three-metre springboard as she pulls out of her routine at the last second 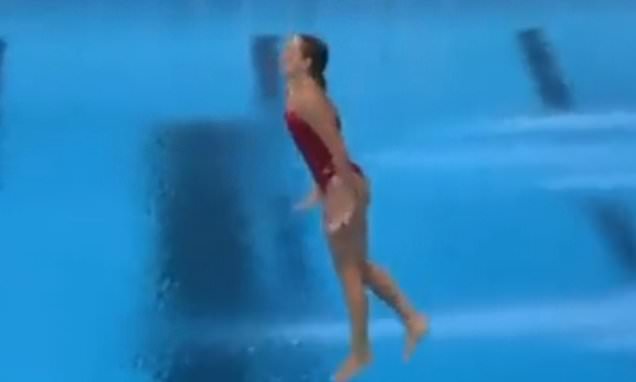 Pamela Ware was making her Olympics debut in Tokyo when she misstepped on her approach to the springboard, causing her to plummet into the water with her feet hitting the surface first. Ware was diving to book her place in the three metre springboard final but horribly miscued the jump with a difficulty of 3.5. 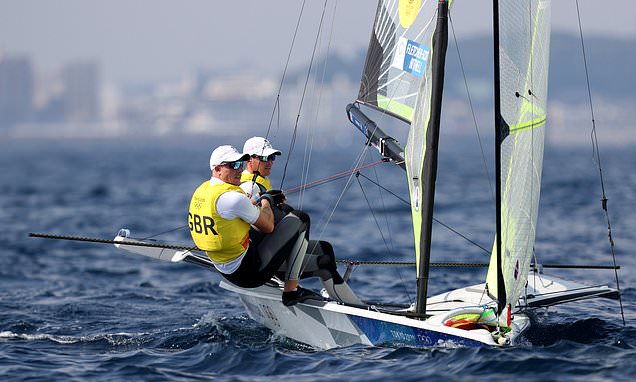 A lack of wind saw all sailing events at the Tokyo Olympics postponed on Monday. Six races were scheduled at Enoshima Yacht Harbour but all were delayed and then eventually called off for the day, with no prospect of conditions improving. Medals had been due to be decided in the women's and men's 49er class, but those races will now be held on Tuesday, wind permitting.

British heiress was murdered by her boyfriend for money, a court hears

Mother-of-four who was 'unmasked, unmuzzled, and unvaccinated' dies of COVID-19 at age 40

When can hormones be blamed for weight gain? DR MARTIN SCURR answers your health questions

You CAN be fat but fit: Exercise could be better for your health than losing weight, experts say

Patients are shelling out a fortune to see a private GPs, healthcare providers say

Girls' mental health crisis was fuelled by internet use in lockdown

How has the energy crisis come about? As fears over fallout deepen, we answer the vital questions

Why we need to get Covid booster jabs... but other vaccines last a lifetime

NIALL FERGUSON: Why the UK and US are united states again... at long last

Anthony Joshua has cashed in on his career wisely... he's set for the Fortune 500, not the scrapheap

'Smart' glasses that could slow down sight loss

Lust, betrayal and reds in the bed: The epilogue to our brilliant Kim Philby series

Morrisons to ban plastic packaging on all bananas

Nice mooove! The patch made from cow tissue that can repair torn shoulder muscle

PM Johnson sits down in New York with Jeff Bezos

Archaeology: Maya pyramid near volcano in El Salvador was built as 'guard against future eruptions'

Can instant noodle pots really count as one of your five-a-day?

This chamber helps divers beat the bends... and it could stop dementia and cancer

ALEX BRUMMER: Return of instability amid turmoil in the energy market

Diseases that could be helped by nerve zapper technology

Prince who's sparked at panic at the palace: The legal vice tightens for the Duke of York

Prudential tumbles as it turns to Hong Kong in £2.1bn equity drive

Boost for City as 'Eurowag and Snowfox prepare for London IPOs

MARKET REPORT: Centrica heats up as it takes on new customers

ALISON BOSHOFF on why, for the new £213m power couple, Adele's greatest hit could not be more apt

Researchers find 3,600 year-old evidence that Tall el-Hammam was destroyed by a 'cosmic airburst'

Made In Chelsea series 22 FIRST LOOK: Ollie Locke breaks down as surrogacy plans hit a wall

Idris and Sabrina Elba cosy up ahead of the British Vogue x Tiffany & Co. Fashion and Film party

My heart is in a million pieces, says father whose two children are among four found dead

Wetherspoons is slashing price of all food and drink by 7.5% on Thursday

Mars is 'too small' to retain liquid water, according to a new study

Desperate Haitians are paying up to $10,000 and traveling up to thousands of miles to cross into US

Greggs launches its Autumn Menu for 2021 including vegan bacon roll

Mother-of-four who was 'unmasked, unmuzzled, and unvaccainated' dies of COVID-19 at age 40