When a £2million project from a world-renowned architect for London's Marble Arch was announced in February, excitement for the 'new perspective on the future' was high.

But today as Dutch designer MVRDV's vision was finally seen by visitors, the only real heights were the £6.50 entrance fee and scale of crushing disappointment.

The Marble Arch Mound was roundly ridiculed today as tourists likened it to a level from Nintendo game Super Mario 64, the Teletubbies' home, or worse still 'seven minutes of work on Minecraft'.

While the designs for the artificial hill had shown a magical space of lush greenery and stunning views, the reality provided very little. 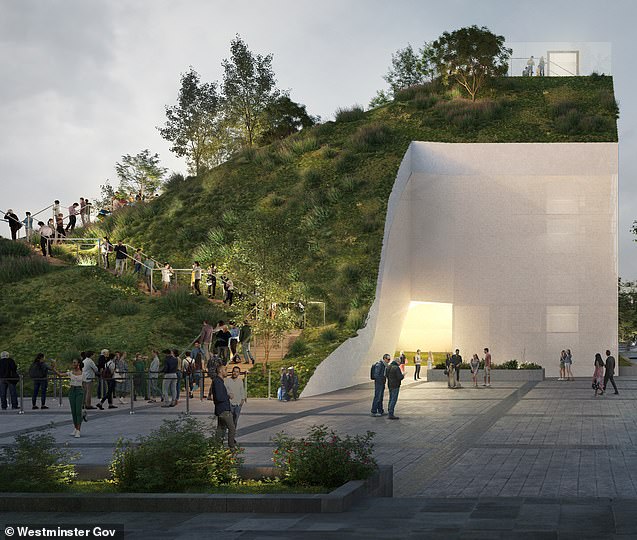 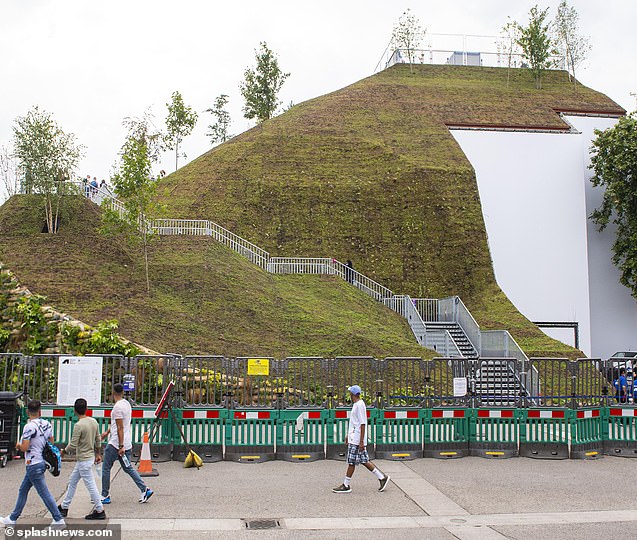 Design versus reality: The plans for the hill on the left compared to how it has been built

What a view! Marketing expert Dan Barker posted this obscured vision from the mount tip

Neighbouring Hyde Park is almost entirely obscured by trees, making it difficult to spot anything on the grasses.

Then to the right a wasteground being developed boast a number of shipping containers and rubble.

The walk-up to the attraction is little better, with a parade of dumper bins lining one corner of the manmade structure.

Its big reveal prompted a barrage of criticism from the public over its cost and execution.

Designed to be a grand celebration of British victories in the Napoleonic Wars, Marble Arch was designed by John Nash – the architect to King George IV – in 1827.

It was intended to be the state entrance to Buckingham Palace and initially stood near where there the central part of the building – complete with the famous balcony – is today.

Whilst most of its grand panels and statues had been completed by 1830, the death that year of the King led to the sacking of Nash by the Duke of Wellington - the then Prime Minister – for overspending.

Designed to be a grand celebration of British victories in the Napoleonic Wars, Marble Arch was designed by John Nash – the architect to King George IV – in 1827. It was intended to be the state entrance to Buckingham Palace and initially stood near where there the central part of the building – complete with the famous balcony – is today

Instead, fellow architect Edward Blore was commissioned to complete the Arch in a less ostentatious fashion.

The Arch itself was completed in 1833, whilst the central gates were added in 1837 – just in time for Queen Victoria's accession to the throne.

When the Arch became overshadowed by Blore's enlarged Buckingham Palace, the decision was taken in 1850 to move the structure to its current location at Cumberland Gate, where it formed a grand entrance to Hyde Park in time for the Great Exhibition of 1851.

It was de-constructed stone by stone and then put back together after making the short journey.

Bassano wrote: 'Having just learned of the Marble Arch Mound, I’m not sure what’s worse.

Marketing expert Dan Barker said: 'I'd joked before that it cost 6p per step to climb it, as the 'fast track' price was £8.

David Heslop opined: 'I've just seen that Marble Arch mound thing, and can anyone explain why it looks like it was built using the terrain editor from the first Roller Coaster Tycoon?'

Jon quipped: 'They needed to either make more effort to make Marble Arch Mound look like a hill, or less effort.

'As it is, it looks like a screenshot from seven minutes of work in Minecraft,'

Joshua added: 'You cannot tell me the Marble Arch mound doesn’t look like the first level in Mario 64.'

Another asked: 'I don't live in London. Is this a joke or have the Tories really built a £2million slag heap by Marble Arch?'

Back in February the stage had been set for a spectacular inner-city display.

He told Architect's Journal: ‘It’s a location full of contradictions, and our design highlights that.

‘Marble Arch Hill strengthens the connection between Oxford Street and the park via the Marble Arch.

'Can this temporary addition help inspire the city to undo the mistakes of the 1960s, and repair that connection?’

Westminster Council was similarly enthused by the design and seemed eager to see the results.

'It will be important for bringing in visitors to support the local economy.

‘However, it will offer so much more. We hope it will give people an opportunity to look afresh and with wonder at this well-known, but sadly increasingly overlooked, area to recognise its beauty and importance.’

Who are Insulate Britain and what do they want?

Clouds of gas are detected on a giant 'hot Saturn' exoplanet

Sabina Nessa: Met Police release CCTV footage of man they want to speak to in connection with murder

How fuel duty protests in September 2000 led to petrol queues, closure of schools and empty shelves

Nightmare neighbours plague army veteran, 72, triggering his PTSD by slamming doors at 1am

Angela Rayner opens up about growing up in poverty

Labour bids for Tory mantle as 'party of home ownership'

Mother, 34, who lost her eye to deadly cancer can blow out candles through her empty socket

New $40,000 Jaguar is totalled when it slides off delivery lorry and smashes into a Chevy truck

Winter holiday deals: There are savings galore to be had on quarantine-free packages

'I love you Mum': Teenager, 19, speaks for first time in six months after he was 'certified DEAD'

Pub bosses slam WHO's plan to cut alcohol consumption by 20%

Teenager, 17, arrested after girl, 15, was 'pulled into the sea and raped' at Bournemouth beach

Who are the Insulate Britain protesters and what do they want?

Hair salon ordered to pay £200,000 for giving an Indian model the wrong haircut

When do the clocks go back, and why do we do it?

Compulsory purchase orders: Could you be forced to sell your home?

HiP chocolate: What is it and who is behind it?

How to protect your finances in a divorce

Is there a petrol shortage in the UK and why are fuel stations closing?

Proud dad! Harry carries laptop bag with 'Archie's papa' embossed on the side during NYC tour

Sabina Nessa 'hit over head near her home'

One in ten Britons have not handwritten anything at all over the past year, survey reveals