United Kingdom
Trusted
This article was added by the user . TheWorldNews is not responsible for the content of the platform.

Jill Biden's Christmas decorations at the White House have been slammed as boring as the first lady appears to be playing it safe following years of Melania Trump's controversial holiday décor - including her infamous hallway of blood red trees in 2018.

With her theme of 'Gifts From the Heart,' Jill Biden has decorated the White House with a collection of Christmas trees, stockings, a gingerbread White House, balloons dedicated to COVID frontline workers and an arch of present boxes at the doorway to the East Wing.

While many seemed to enjoy Biden's festive design, calling it a return to normalcy, Trump defenders described it as austere and claimed the former first lady had a better eye for decorating the White House.

'Anyone who ever criticized Melania's Christmas decorations needs to apologize right now,' Donald Trump Jr. wrote on Instagram. 'If we lower our expectations any further we’re gonna turn into an S-hole country.' 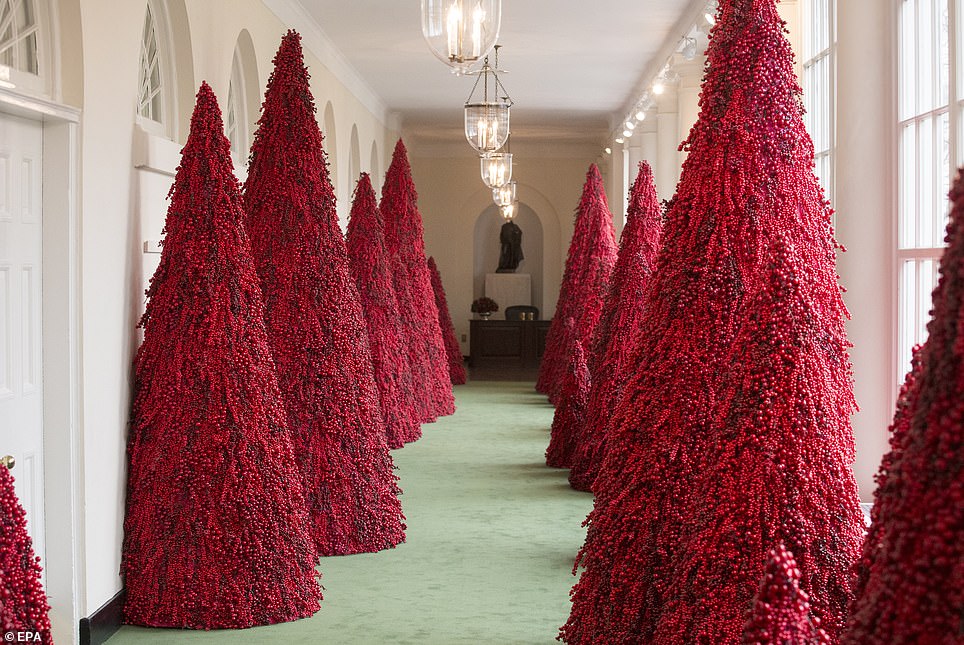 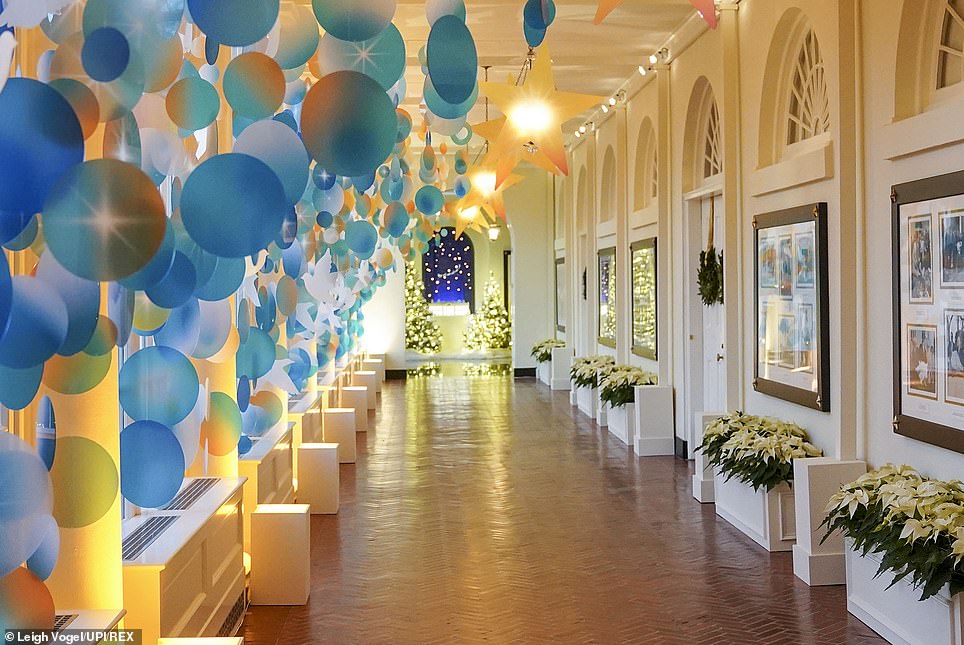 Jill Biden decorated the East Colonnade with balloons dedicated to COVID frontline workers (right). Her decorations for the hallway are a far cry from the blood red trees Melania Trump installed there in 2018 (left) 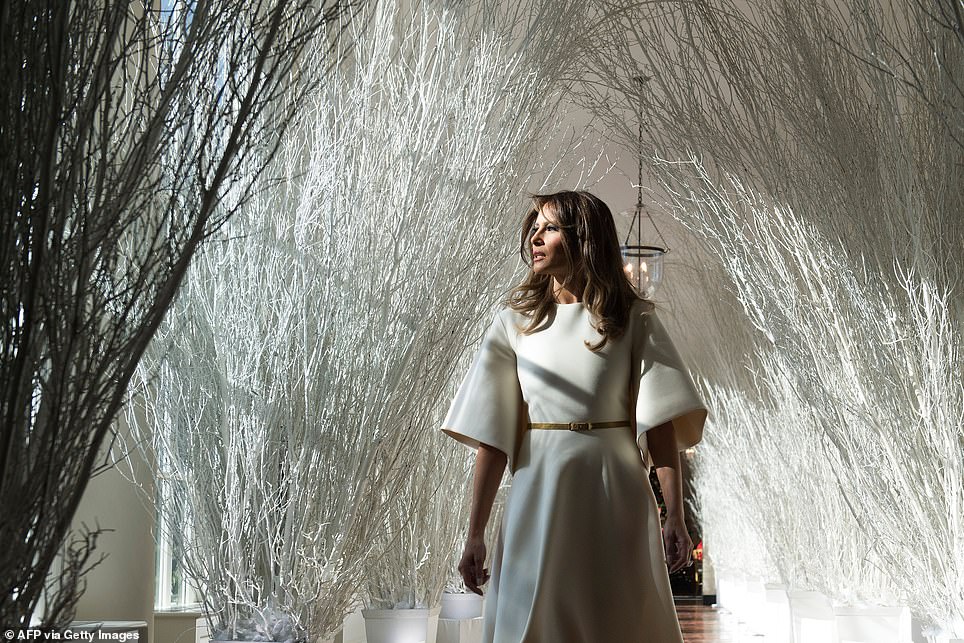 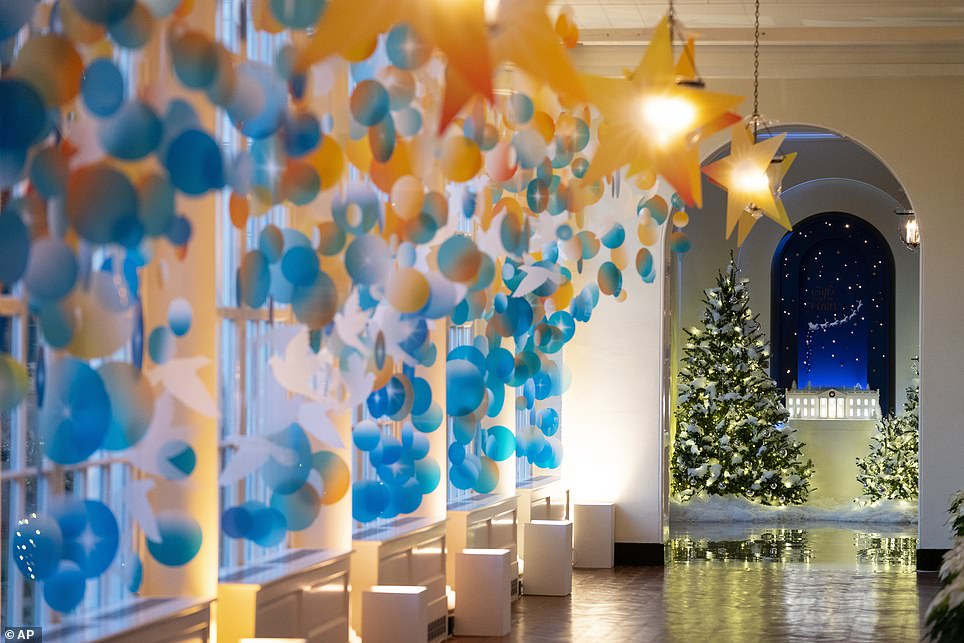 In 2019, Trump decorated the same hallway with ghost-like holographic trees for the theme 'The Spirit of America'

The following year was the tamest so far for Trump, pictured strutting among wreaths and trees

Trump's odd decorations in 2019 featured her Be Best logo, with a wreath made out of freshly-sharpened pencils with the logo

Twitter user Terrence Pilgrim slammed the East Wing entrance design, writing, 'They say this is the decoration for the entrance to the White House that Jill Biden did, but are they sure she just didn't leave the trash out?'

Another Twitter user with handle Blue Parrot Books defended Biden and tweeted, 'Glad to see that Dr. Jill Biden has put an end to Melania's War on #Christmas Decoration!

The former first lady's commitment to the holidays was questioned in 2018 after a leaked recording revealed she once said, 'Who gives a f*** about Christmas stuff and decoration?'

Twitter user Phil Arballo wrote, 'Republicans pretending Melania Trump's blood trees were a genius design choice is one of the best examples yet of how the GOP is just a cult now.'

Decorating the White House this year involved 41 Christmas trees, 6,000 feet of ribbon, more than 300 candles and over 10,000 ornaments.

The decorations were more low key than in the Trump years. The bling factor was notably less with fewer lights as Biden kept the décor simple and focused on her love of books and nature.

It stood in stark difference to Trump's decorations during her stay at the White House, which included blood red trees in 2018 that late-night host Jimmy Fallon called 'Christmas meets The Shining.'

Jill Biden unveiled her 'normal' Christmas decorations at the White House, which stand in stark contrast to the decorations previously put up by former First Lady Melania Trump 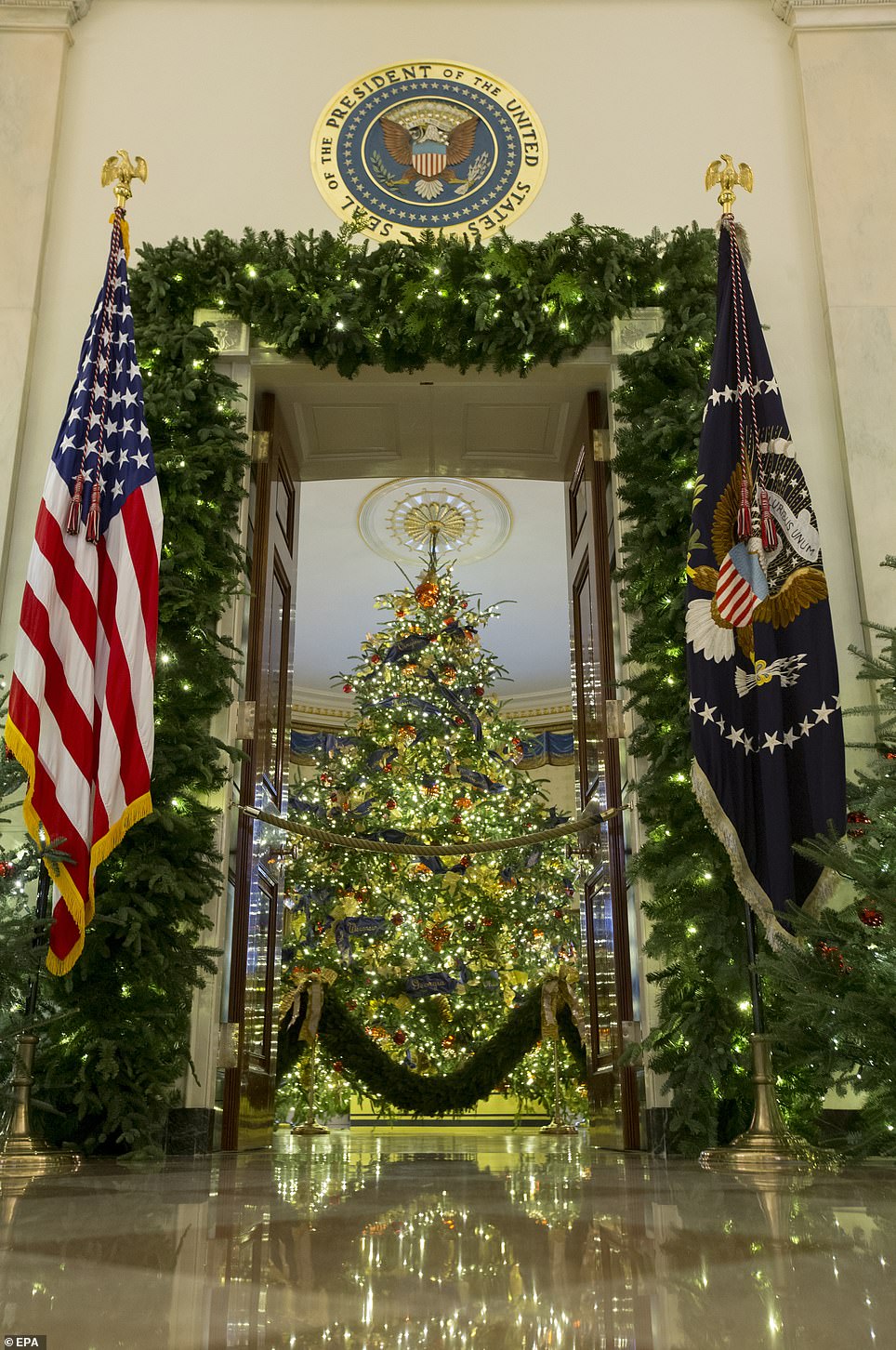 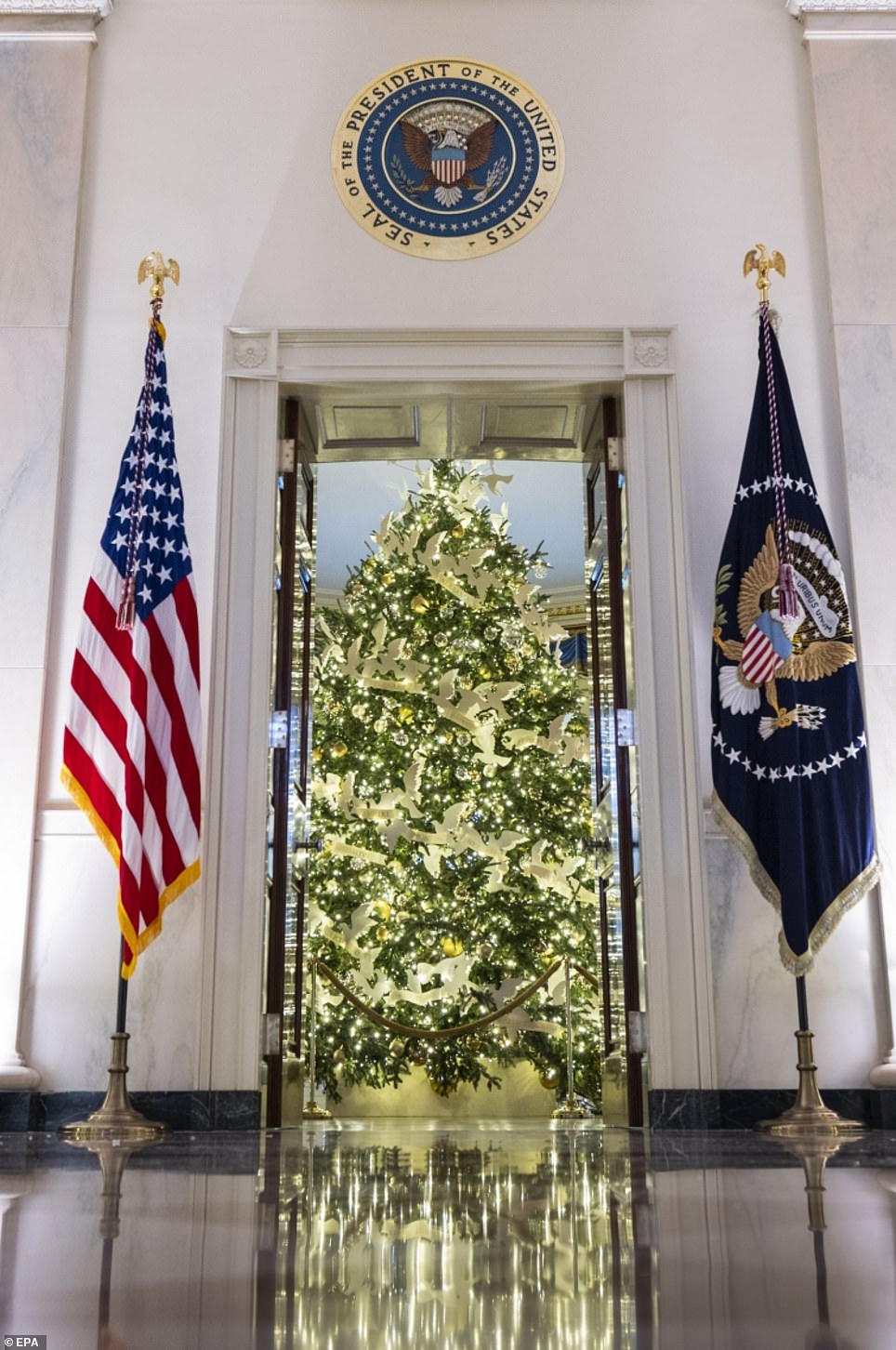 In 2019, the White House had at least one hallway lined with white suspended snowflakes, pictured 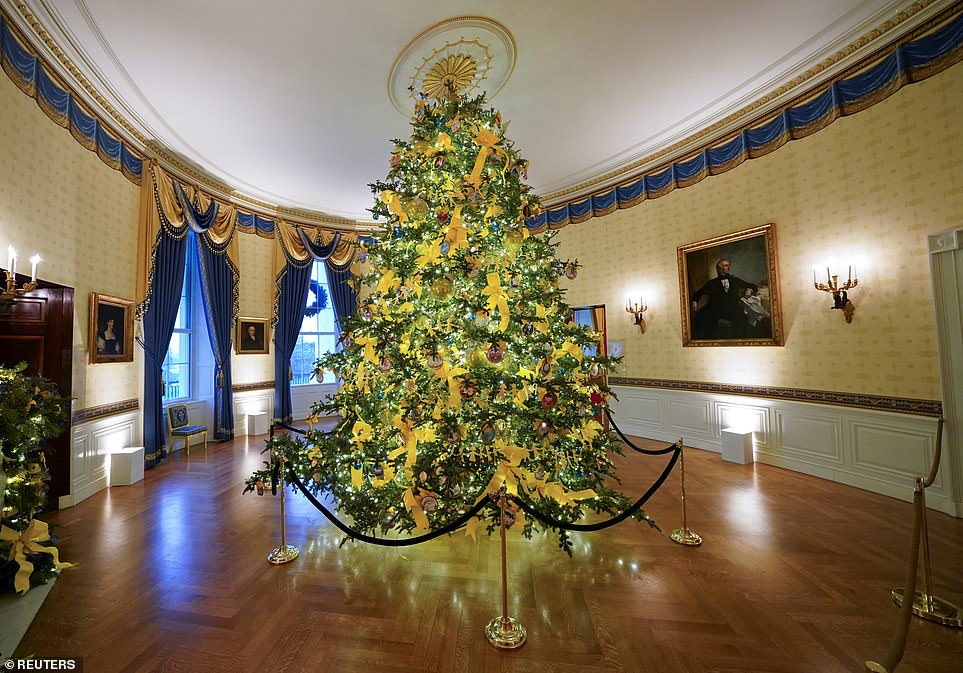 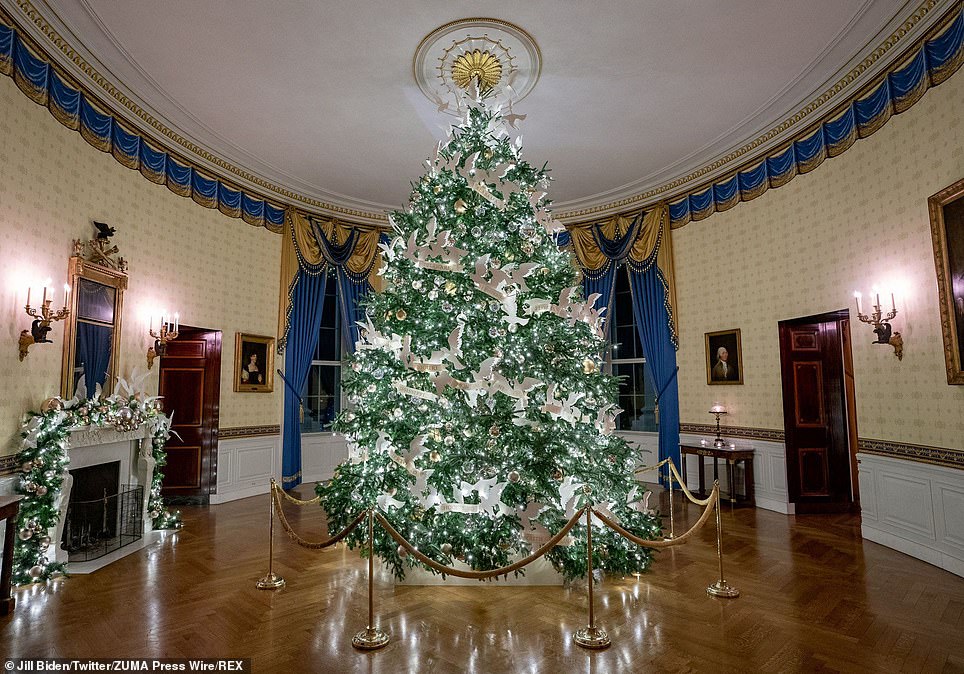 The tree in the Red Room features items of interest to children including ornaments in the shape of skate boards, film clapper boards and karate uniforms

The Christmas before that, Trump decorated the halls with shriveled white trees that were described as alienating and invoking the image of a woman isolated during the holidays.

The New York Times style section commented that because Trump's previous choices sparked so much controversy, the fact that 'the Biden look is so unremarkable is, itself, worth remarking on.'

And people have been remarking, arguing about which First Lady had the best Christmas decorations.

The trees included a pic of first families in the White House, including the Trumps when they received their tree last year 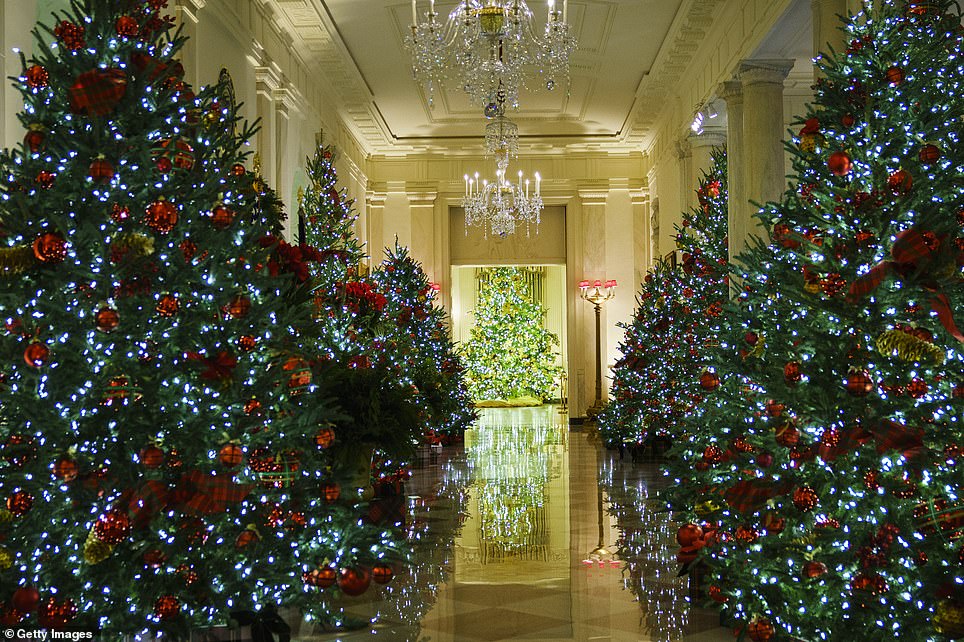 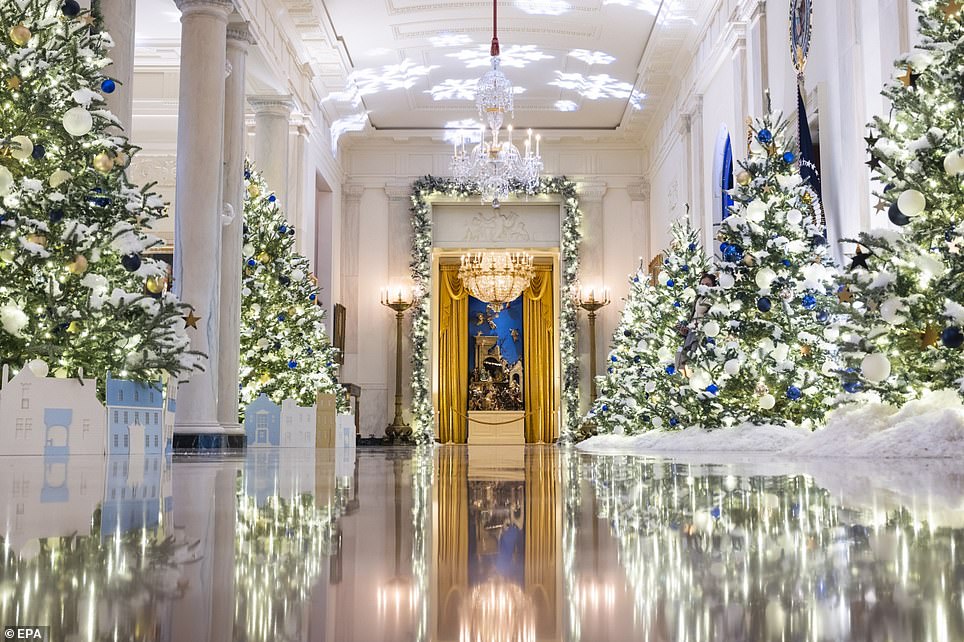 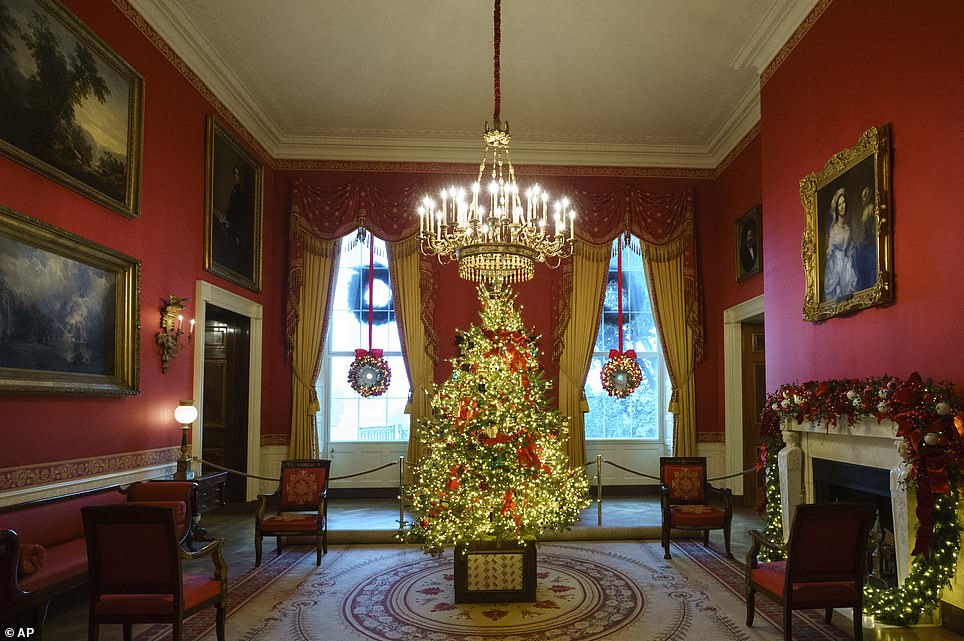 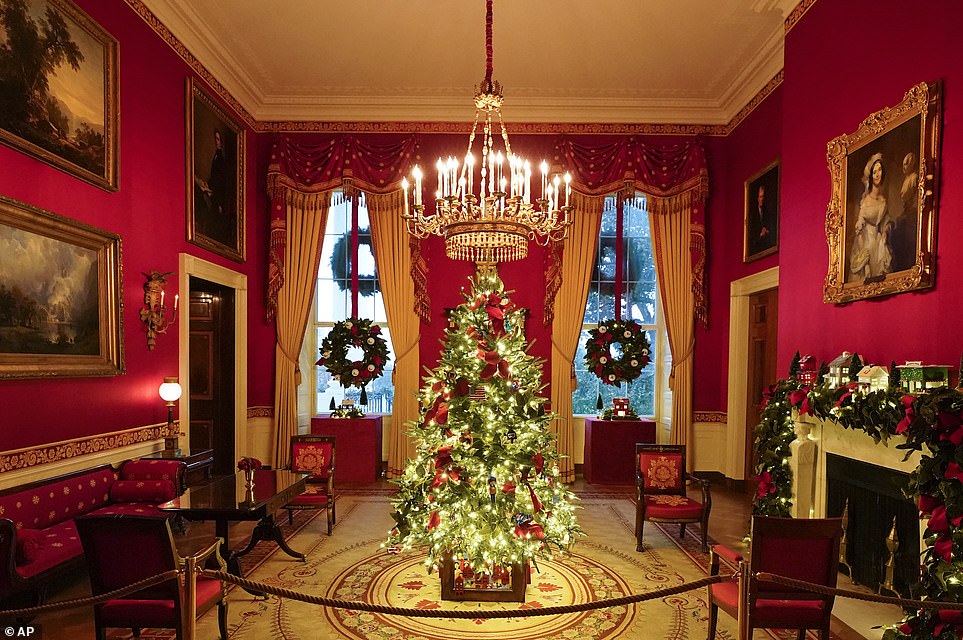 Both first ladies had similar designs for the decorations and tree in the Red Room, Melania left in 2019 and Jill's first White House Christmas, right

Along with Biden's theme of Gifts from the Heart, rooms in the white house have their own mini-theme to celebrate the holidays.

The Red Room honors the 'Gift of the Performing Arts.' The decorations include brass instruments hanging from the mantel along with ballet slippers, tap shoes, and musical notes.

Also in the Red Room, two cranberry topiaries are on display, a tradition which began in 1975.

The State Dining Room celebrates the 'Gift of Family.'

STOCKINGS HUNG BY CHIMNEY WITH CARE: The stockings on the fireplace in the State Dining Room feature the names of the Biden grandchildren: Naomi, Finnegan, Maisy, Natalie, Hunter and Baby Beau

YUM: The Gingerbread White House and village is made of 55 sheets of baked gingerbread, 120 pounds of pastillage, 35 pounds of chocolate, and 25 pounds of royal icing

Surrounding the White House: a hospital, a fire station, a police station, a gas station, a grocvery store, a school - complete with a gingerbread school teacher - a post office and a warehouse

The Biden family stockings are hanging on the fireplace that holds the inscription known as the White House blessing: 'I pray Heaven to bestow the best of Blessings on this House and on all that shall hereafter inhabit it. May none but honest and wise Men ever rule under this roof.'

It was taken from a letter written by President John Adams to his wife, Abigail, dated November 2, 1800.

The Christmas Trees in the State Dining Room contain ornaments featuring photographs of first families, past and present.

Those photos came from the archives. There are also several Biden family photos on the two trees. Dr. Biden picked out the pictures herself the last couple of times when she's been in Delaware.

'She's been going through old family albums to pick them out,' Alexander said.

The Trumps, Obamas, both Bushes, Reagans, and Carters all have photos on the tree. The Biden family photos include the kids and grandkids along with dogs Champ and Major.

On the fireplace are stockings with the Biden grandkids' names: Naomi, Finnegan, Maisy, Natalie, Hunter and Baby Beau. The stockings are from a vendor in Delaware and is the same vendor that made for stockings for Jill Biden of her kids and grandkids.

Man, 24, is charged with animal cruelty after 'decapitating a DUCK' in a car park

Vote of confidence in Brexit Britain from Citigroup and Bentley

Want the brightest child in class? Get pregnant NOW!

Why do women like me go back to abusive men? Powerful new book by LUCY HOLDEN...

STEPHEN GLOVER: Why is the Metropolitan Police wasting resources investigating No10

Thug kidnapped girlfriend, 19, bundling her into van before she fell into dual carriageway [Video]

Factories have only five days' supply of some computer chips, US Commerce Department says

Moment thug kidnapped girlfriend, 19, by bundling her into van before she fell into dual carriageway

Convicted rapist from Hertfordshire scammed the National Lottery out of £2.5 million

Female DoorDash driver, 51, is shot dead by robbers in Baltimore

Anti-Asian hate crimes rose 567% in San Francisco in 2021: One man responsible for 31 attacks

Barclays to bid for mortgage firm Kensington in race with Starling

Hedge fund offers £38m for owner of the Wolseley, the West End restaurant to the stars

Another day without Sue Gray: Commons breaks up for the night with NO sign of Partygate report

Mother of schoolboy Rikki Neave, six, blamed his headteacher for 'facilitating' his murder

'I think he will kill me': Texts of mother, 43, who was stabbed to death by abusive ex in Maida Vale

More than 1,300 reports of needle spiking have been made to UK police forces since September

Grieving woman, 22, is told she can't use her dead husband's frozen sperm for IVF

Stephen Breyer, 83, to retire from SCOTUS after 27 years

Teacher gains over 100,000 followers after sharing answers from six-year-old students'

Supersaver, 26, reveals how  how she has raked in £5,000 by using app referrals and cash back sites

'He ruined our lives': Women reveal their ordeals at the hands of online stalker

Could this podcast about legendary illusionists Siegfried and Roy be the next Tiger King?