Hundreds of vessels used by migrants to make the perilous trip across the English Channel are lying in storage in a factory in Dover, it has emerged.

Drone pictures show more than 100 small boats piled up in rows in a fenced-off compound - evidence of thousands of people's journeys to the UK in 2021.

The collection of vessels seems to be significantly higher than another set pictured in storage in Dover in 2020.

It comes amid a record-breaking year for migrants crossing to the UK - despite vows from the Home Office to make the route 'unviable'.

More than 9,000 people have crossed the Channel so far this year on board small boats, despite the dangerous journey claiming lives in the past. In July so far, more than 3,300 have arrived in the UK in a new record for a single month.

The Border Force can keep the seized boats for 12 months before 'disposing' of them - though it is unclear if they are destroyed or re-used.

They can also hold onto the boats for longer if they are part of an active investigation - such as any potential action against people smugglers. 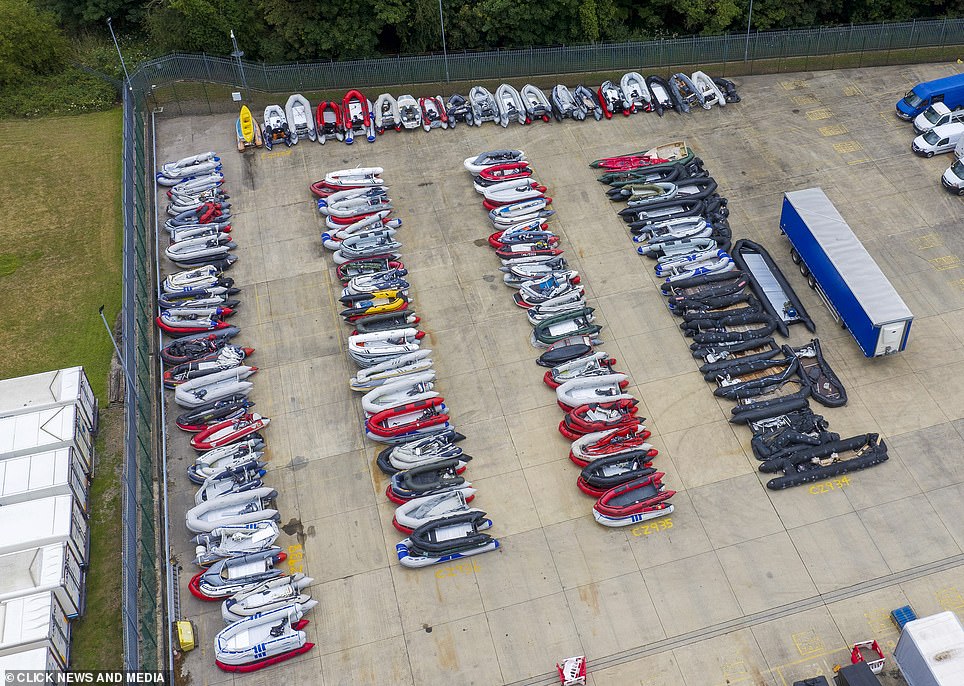 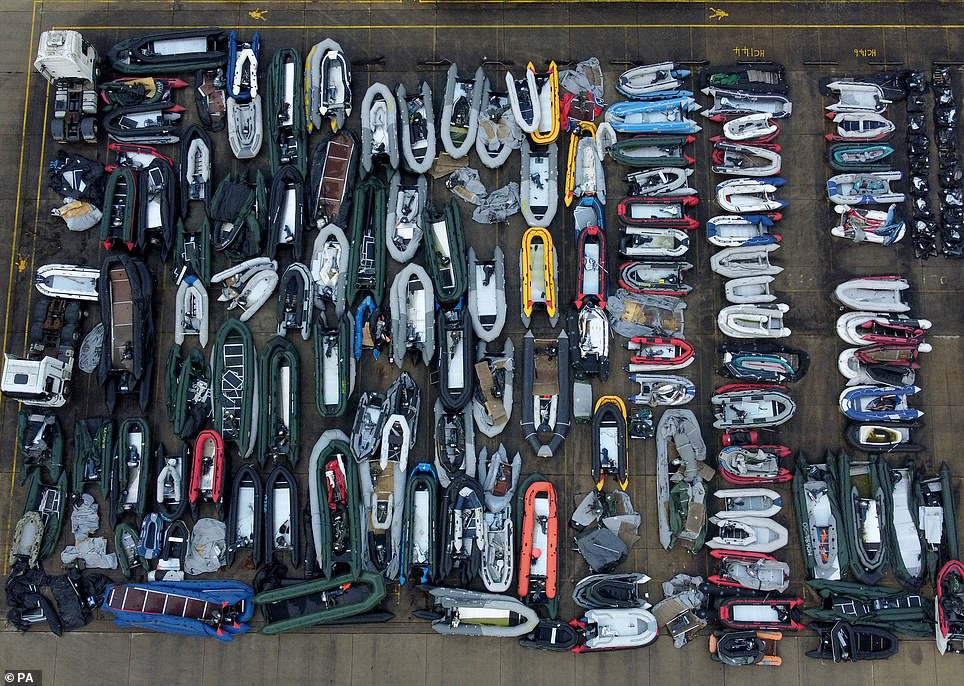 Picture one: Vessels stacked up at the warehouse facility in Dover in 2020. Picture two: 2021, a significant increase in vessels seized after a record year for crossings 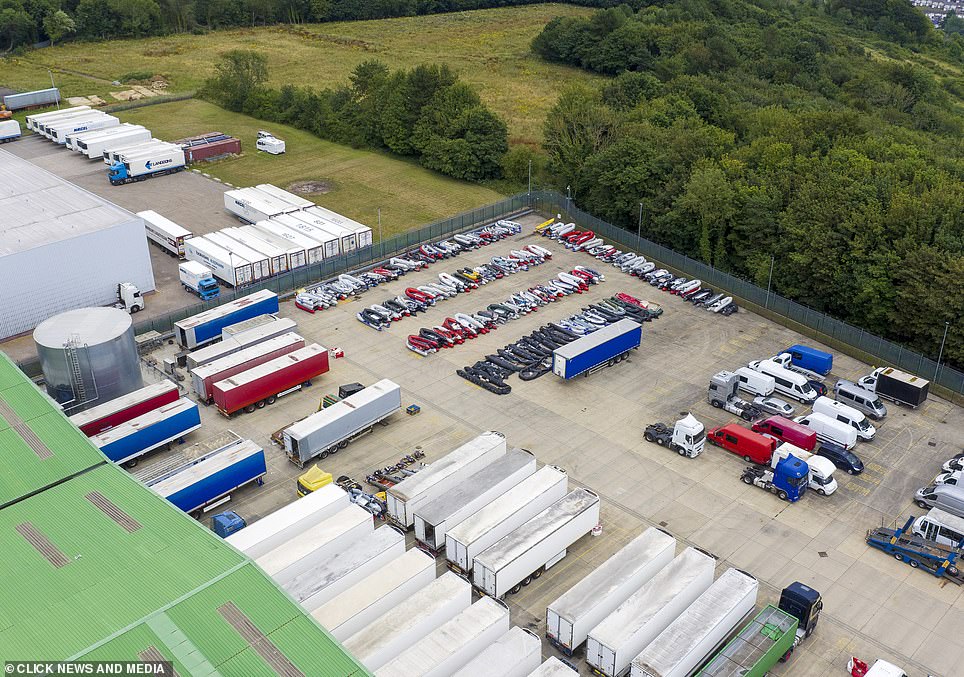 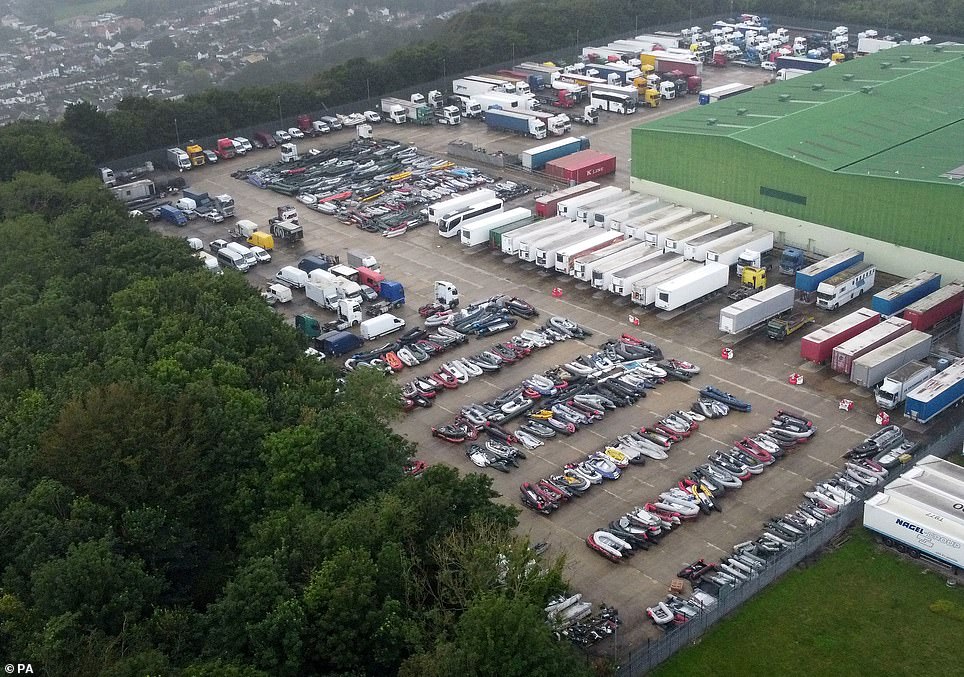 Picture one: 2020, a small section of a facility for migrant boats. Picture two: 2021, the huge growth in vessels amid a record-breaking year for migrant crossings 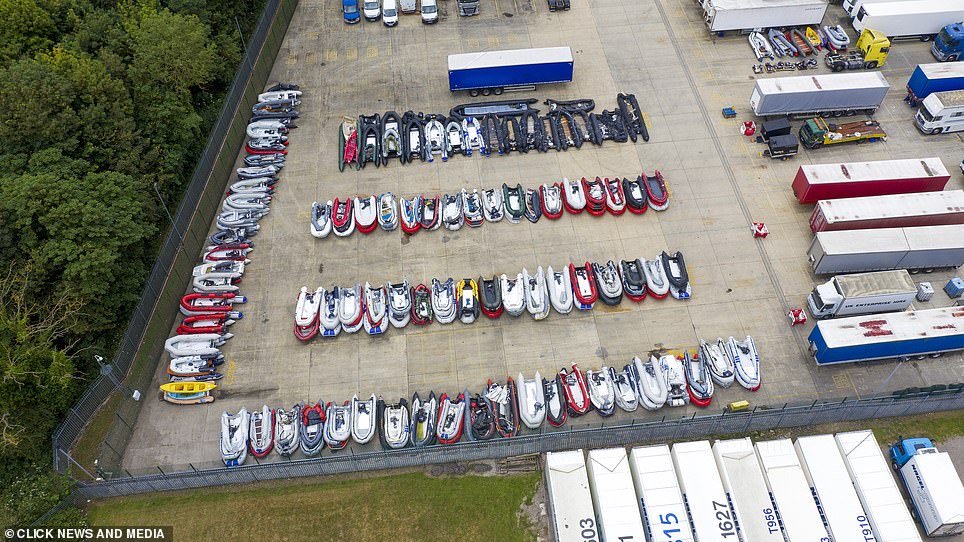 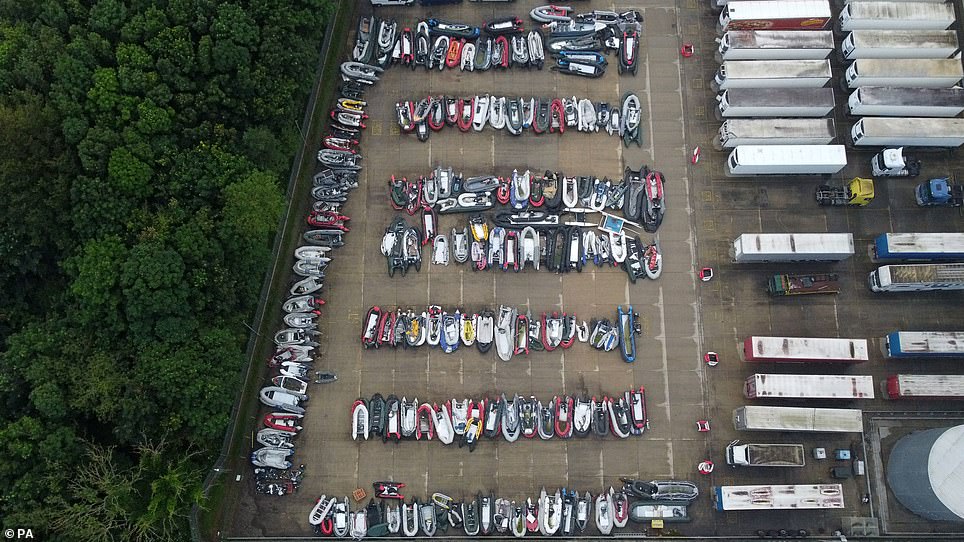 Picture one: 2020, a neatly organised storage center in Kent for migrant boats. Picture two: Taken in 2021, a large increase in the number of seized boats

The Border Force were active in the Dover Strait again on Tuesday, but higher winds were set to make crossings difficult.

Government officials fear that high numbers of crossings will continue as summer goes on, with small boat arrivals this year having already passed the total for the whole of 2020.

Despite this, the UK continues to see fewer boat arrivals and asylum claims than many of its European counterparts.

At least 44,230 people have arrived in Europe via the Mediterranean by land and sea so far this year, according to data from the United Nations High Commissioner for Refugees (UNHCR).

In recent months, law enforcement agencies have noticed the organised gangs behind the English Channel crossings becoming increasingly sophisticated, launching boats from a wider area of the northern French coast.

They will also send out vessels in waves - smaller boats sent out first to tie up the French authorities, while more craft carrying larger numbers of migrants make the crossing later in the day.

Officials have been alarmed by the overcrowding in the vessels - one boat last week had 83 people on board - and the safety conditions.

They have come across inflatable boats held together with duct tape and migrants with rubber rings or bike tyre inner tubes rather than life jackets.

Last week Home Secretary Priti Patel announced an agreement to more than double the number of police patrolling French beaches, with the Government to give France £54 million.

But, while efforts to address the problem have been stepped up by Emmanuel Macron's government - with around 2,700 people taken back to France so far this year after being intercepted at sea - there is still some frustration in the Home Office about French policies.

Government officials fear that high numbers of crossings will continue as summer goes on, with small boat arrivals this year having already passed the total for the whole of 2020

The French authorities will not intercept migrants who offer resistance to being rescued, but the UK has a different interpretation of the law.

British offers to help board vessels in French waters have so far been rebuffed by Paris, it is believed.

The Home Secretary told MPs last week that she had made her views on the situation 'abundantly clear' to her French counterpart.

The UK is also helping to fund aerial surveillance along the French coast but legal difficulties in France have meant that the drones are not being used as much as had been hoped.

Officials acknowledge there is no silver bullet to tackle the situation, but they have been in contact with counterparts in Australia and Greece to discuss how those countries cope with situations off their coastlines.

Previously, it emerged that Albanian criminals are charging up to £20,000 to smuggle migrants to the UK through TikTok and other social media sites.

A Mail investigation found popular sites awash with adverts from human traffickers, sometimes mocking attempts by the British authorities to stop them and posting slickly produced step-by-step tutorials to help illegal migrants sneak into the UK.

They illustrate the scale of the problem facing Home Secretary Priti Patel, who recently visited Albania to sign a deal speeding up deportations of criminals and failed asylum seekers.

Border Force vessels worked through downpours of rain to bring 378 migrants into the Port of Dover on Sunday, one of the busiest days of 2021. Pictured: One man flashes a 'V for victory' sign as they arrive in port

The number of migrants crossing the Channel between 2019-21 has been increasing year-on-year. The graph above shows how many have crossed each month. The red line for 2021 soars above the lines for previous years, showing the monthly total is now at its highest ever

One people smuggler, whose TikTok account has been viewed by tens of thousands of people, boasts in his profile: 'All interested who'd like to get to England contact my inbox. Journey secure 100 per cent.'

His videos feature pictures of the Union Jack and Big Ben with the comment: 'Secure journey from Albania to the UK. 23K Euro.'

Priti Patel previously agreed to give France another £54million to stop the growing number of migrants crossing the Channel.

The Home Secretary's controversial agreement with French interior minister Gerald Darmanin will see policing numbers along the French coast more than double to 200 to cover a wider area.

There will also be an increased use of aerial surveillance, including drones. The two countries agreed to draw up a long-term plan for a 'smart border' using technology to identify where crossings are being attempted.

But the deal failed to impress critics, who accuse the French authorities of not doing enough to stop small boats leaving their territorial waters.

Artipoppe: The celebrity-loved parenting buy that is flying off the shelves

Tennis star Jelena Dokic, 38, hits back at body shamers after being cruelly taunted for her shape

New Zealand mother accused of murder had 'the prettiest house'

Craig Revel Horwood reveals dancers have been isolating for WEEKS

Smuggler tries to sneak £4,000 worth of gold through customs disguised as false teeth

How did the BBC let Martin Bashir get away with it?

Meat supplies could run out in two weeks and Christmas dinner is under threat, gas suppliers warn

SARAH VINE: The death of Boris's mum reveals how inhumane our politics has become

Starmer fails to help sports centre where he plays football

NHS's diversity tsar is paid £35,000 more than its chief executive

Poison tests are finally being carried out on ex-landfill site

Covid Delta variant 'will hunt down anyone who's not had jab', scientific advisers warn No 10

TALK OF THE TOWN: Stella McCartney's £1,500 shock for pals

TALK OF THE TOWN: Influencer Millie Mackintosh is running out of 'twinning' outfits

Their apocalyptic warnings have proved inaccurate, but 'experts' still have the Government's ear

TALK OF THE TOWN: Is party queen Kate Moss back to her wild ways?

TOM BOWER: Surely, as an intelligent man, Charles can see his actions bode ill for a future King

Charles and the Chinese donor who's a wanted man in Taiwan

Should healthy Britons be given blood pressure tablets?

MAIL ON SUNDAY COMMENT: From bias to Bashir, the BBC's closed and haughty elite must learn to listen

Restaurants will be banned from keeping tips intended for staff

'No jab, no jive' storm rocks Strictly: Two dancers shun vaccine, another has had positive test

'I never ever dreamt I would have kids': EastEnders star Sid Owen to become a dad at 49-years-old

Britain's most remote pub sees locals raise over £200,000 to buy it

PETER HITCHENS: Holding the handrail won't kill you - but the Covid Hezbollah might!

MATT HANCOCK: In all my time, I have never come across a group so dangerous as anti-vaxxers

Can you be friends with an anti-vaxxer?

Philip was a Hairy Bikers fan who wouldn't let any other Royal touch his barbecue, his family says

Rolls-Royce's nuclear plan to mine on Moon

$40bn float is just the start of growth - Universal chief

HAMISH MCRAE: Back to basics to tame inflation