Farmland on front of Commons agriculture report is turned into building site for 2,000 homes

It is a glorious picture of a field of ripening barley set against a backdrop of rolling English countryside.

A fittingly symbolic image, you would think, for the front cover of a key House of Commons briefing paper which outlines the biggest overhaul to British farming since the end of the Second World War.

But like other aspects of the Government’s controversial Agriculture Bill, which many fear could spell the end of a way of life for farmers and the abandonment of our precious countryside, not everything is as it appears.

For the disturbing truth is that since the photo was taken of the bucolic Hampshire field, it has been handed over to developers who have begun building 2,000 new luxury houses on it. 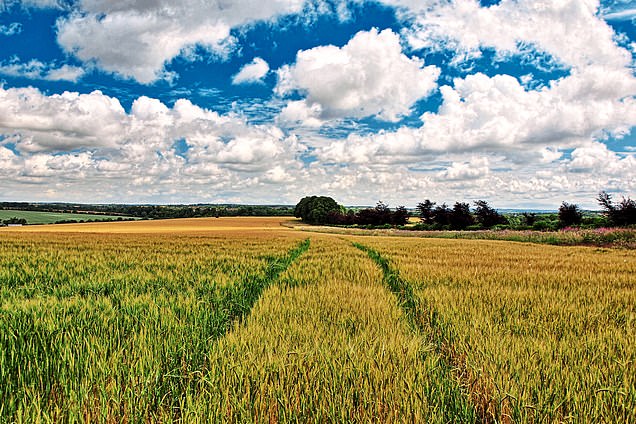 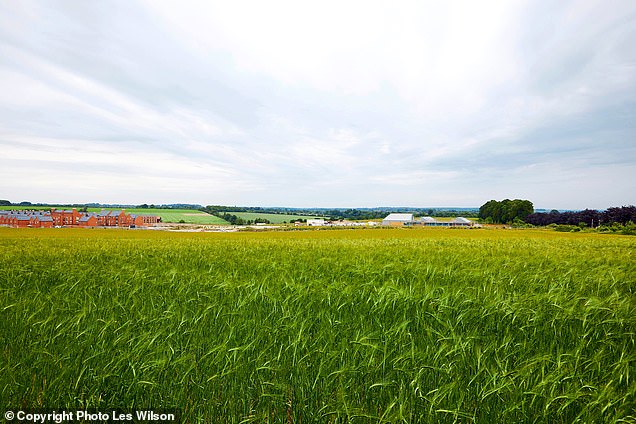 Since the photo was taken of Barton Farm (left), it has been handed over to developers who have begun building 2,000 new luxury houses (right)

So these two pictures tell in a brutally stark way how our countryside is not being protected by the politicians who claim to be its guardians.

Of course, Commons officials were not to know that the image they chose of Barton Farm outside Winchester, taken in 2009, would become so embarrassingly out of date and symbolic of their lack of care.

But they could have had the good sense to check when they used it for the 107-page Agriculture Bill Briefing Paper.

If they had, they would have discovered, as The Mail on Sunday has done, that developers won a long-running battle against angry local residents who had fought plans for a sprawling estate of homes costing up to £890,000 each on the outskirts of the ancient cathedral city.

Until then, for longer than living memory, walkers had enjoyed strolling along the public footpath through 230 acres of arable farmland owned by the prestigious private school Winchester College.

The school rented the land to tenant farmers but in the late 1990s, announced it intended to sell.

Cala Homes reportedly paid £100 million to buy the site and there followed a dispute lasting almost 15 years before Cala finally got its way after numerous planning appeals and a High Court showdown with Winchester Council.

Steve Brine, the local Tory MP, recalled: ‘Thousands of people signed petitions. I remember thousands were in the High Street marching, calling on the council for it to be blocked.

Local Tory MP Steve Brine recalled: 'I remember thousands were in the High Street marching, calling on the council for it to be blocked.'

'We said we didn’t want to lose a landscape setting that makes this city such a pleasurable place to live in.’

The council rejected the planning application in 2010 – a decision backed by then Communities Secretary Eric Pickles. But Cala Homes took the case to a judicial review at the High Court, which ruled in its favour. Mr Pickles was forced to approve the development in 2012.

Photographer Neil Howard, who took the original picture, said: ‘What an irony!

‘I feel the Government’s attitude to the wants and needs of communities at a local level is perfectly illustrated by what has happened to this beautiful bit of countryside.

'Destroying well-used green space and working farms is not the sort of thing that should be encouraged.’

Local feelings are still very strong. Paul Trenton, a retired accountant who lives near the development, named Kings Barton, said: ‘They should never have been allowed to build it.

'Winchester used to be ringed by countryside. Now we are going to have this urban sprawl just like everywhere else.’

Another neighbour, who asked not to be named, said: ‘The developers had deep pockets and were never going to give up until they got what they wanted.’

Residents have moved in as the initial phase of the development – 420 homes and a new primary school due to open in September – nears completion.

One of the new homeowners, a woman in her early 40s, said: ‘We are very happy with our house. It’s amazing.’

In total across the country, 277,000 acres of farmland, roughly the size of Bedfordshire, was lost to urban developers between 1990 and 2015, according to data from the UK Centre for Ecology & Hydrology.

Senior agriculture industry figures fear even more farms will be lost in the coming years if the Government opens the floodgates to imports of cheap, sub-standard food.

A Government spokesman said yesterday: ‘We have been clear that in all of our trade negotiations we will not undermine our high domestic environmental protection, animal welfare and food safety standards by ensuring in any agreement British farmers are always able to compete.’

Leonardo wants to see Allegri at PSG, but the club still trusts Tuchel
Manchester United and Liverpool want to sign 15-year-old Sochaux defender of Kambala
Lloris and Son almost got into a fight after the 1st half with Everton. Before the 2nd, the players made up
Massimiliano Allegri: I am Looking for a project that will have ambitions to win
Simone Inzaghi on the scudetto fight: Lazio looks only at itself
Ntombela and Mourinho do not communicate for two weeks. Then the player told the coach that he wanted to leave Tottenham
The ex-Real Madrid player helps develop artificial intelligence in football. This feature is useful for a coach, sports Director, and doctor at the same time
Source https://www.dailymail.co.uk/news/article-8394787/Farmland-Commons-agriculture-report-turned-building-site-2-000-homes.html?ns_mchannel=rss&ns_campaign=1490&ito=1490

Amanda Kloots thanks family after death of Nick Cordero

Publisher reveals character 'portrayed in a racist way' is white

David Starkey apologises for `so many damn blacks´ comment

Thomas Jefferson descendant says memorial SHOULD be taken down

Coronavirus UK: A FIFTH of 10.5m tests haven't been processed

Seven arrested after racist abuse of black family in Oregon

Ladder falls off van overtaking at more than 70mph on M5

Man, 30, with PTSD killed himself as he couldn't rejoin military

Kate Garraway shares thanks as husband emerges from coma

US coronavirus deaths hit 130,000 as Florida's cases DOUBLE in less than two weeks

How to get a free Costa Coffee is chain reopens 2,000 stores

Kate Garraway shares a heartfelt message of thanks during 'ghastly times'

Housebuilders Barratt to repay all their furlough money

Sisters killed in London park found 'entwined' on the ground

Girl, 13, killed after falling out of carjacked van in California

Psychologist jailed for life after killing bodybuilder with barbell

Ferrari LOSES legal battle to trademark the shape of 250 GTO

Romanian woman runs for life after posing with BEAR for photo

Melbourne residents say they're 'dying of starvation' in lockdown

Twitter users reflect on the things they'll miss about lockdown

How Australian families impacted by the COVID-19 could save $3,000 on rent and electricity bills