A cruise ship rescued hundreds of people in St Vincent yesterday after delivering supplies to the volcano-hit Caribbean island.

It also delivered water and other vital supplies to people left on the island coated in ash from a week of violent eruptions.

La Soufrière volcano shot out another explosive burst of gas and ash earlier yesterday morning as thousands continue to be affected by the destruction.

The explosions that began on April 9 forced some 20,000 to flee the northern end of the eastern Caribbean island for shelters and contaminated water supplies across the island.

British, US and Canadian nationals were evacuated aboard from the harbor in the Kingstown, capital of St Vincent and the Grenadines.

The tourists toting luggage descended from tour buses and cars at the port terminal and waited in a line that began in the parking lot.

They included students from the Trinity School of Medicine and families with young children in arms.

Canadian student Leah Ransai said: 'As of right now, we are being evacuated for our safety and to keep the island as safe as possible.

'Between the school, the government and the embassies of the US and Canada, we're being evacuated now.'

British, Canadian and US nationals line up alongside the Royal Caribbean cruise ship Reflection to be evacuated free of charge, in Kingstown on the eastern Caribbean island of St Vincent yesterday

The US Embassy said those aboard would have to make their own travel arrangements home.

It also noted in an official statement that the US Centers for Disease Control and Prevention had recommended against travel on cruise ships because the chance of getting Covid and said people who had been in close contact with suspected Covid cases were barred from the trip.

All aboard were supposed to have a negative rapid antigen test taken within 24 hours of boarding.

Speaking on local NBC radio, he said: 'It wasn't a big explosion compared to the ones that we last weekend, but it was big enough to punch a hole through the clouds.'

During a comparable eruption cycle in 1902, explosive eruptions continued to shake the island for months after an initial burst killed some 1,700 people.

Around 20,000 people on the island are at risk of food insecurity because of the loss of fisheries and agriculture

The new eruptions so far have caused no reported deaths among a population that had received official warning a day earlier that danger was imminent.

Thousands of locals are still stuck in emergency shelters with no idea when they might be able to return home.

Levi Lewis, 58, a retired public servant from the town of Fancy, said the eruption had left him trying to get by with practically nothing.

He said: 'I just reusing clothing cause i didn't walk with much. Plus water is an issue, so I'm trying to conserve it still.

'I want to go back home, or to whatever is left of it.'

A few people, however, never left, in defiance of evacuation orders.

Raydon May, a bus conductor in his late 20s who stayed in Sandy Bay throughout the eruptions, said he had always planned to stay if the volcano erupted and was trying to protect properties in the community while making occasional trips outside the evacuation zone to pick up water and supplies.

A view from the Belmont Observatory in St Vincent. La Soufrière first erupted Friday for the first time in over 40 years, with continuous explosions over the following days

He said so much ash had fallen that the roofs of houses were collapsing under the weight.

'One roof might get on like three truckloads of sand,' he said. 'We trying to help ... but we can´t help everybody.'

Didier Trebucq, United Nations resident coordinator for Barbados and the Eastern Caribbean, warned on Wednesday that the 'crisis' is likely to linger for several months even after the volcano goes quiet.

'So we are facing a situation with a great deal of uncertainty, and also a humanitarian crisis that is growing and may continue for weeks and months,' he told reporters.

He said around 20,000 people are 'estimated at risk of food insecurity, given the loss of the assets in terms of livelihood like fisheries, or agriculture'.

'This is a crisis that is going to certainly last more than six months in St. Vincent and other islands,' he added.

Fears are also growing about a surge in Covid infections as families pack into government shelters and into homes of friends and relatives after fleeing their homes.

Dr Simone Keizer-Beache, chief medical officer on the Caribbean island, said in a press briefing Thursday that around a dozen new cases have been reported in recent days. 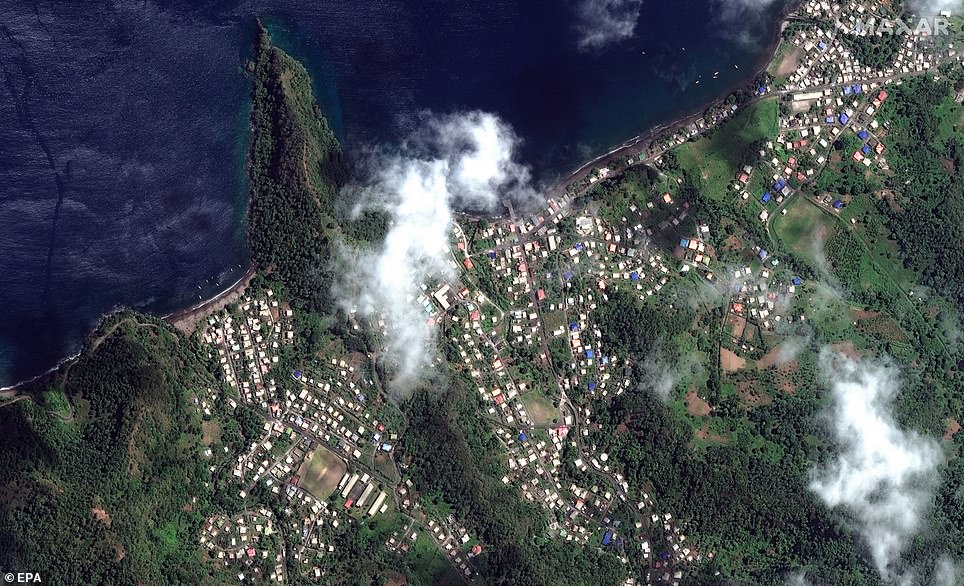 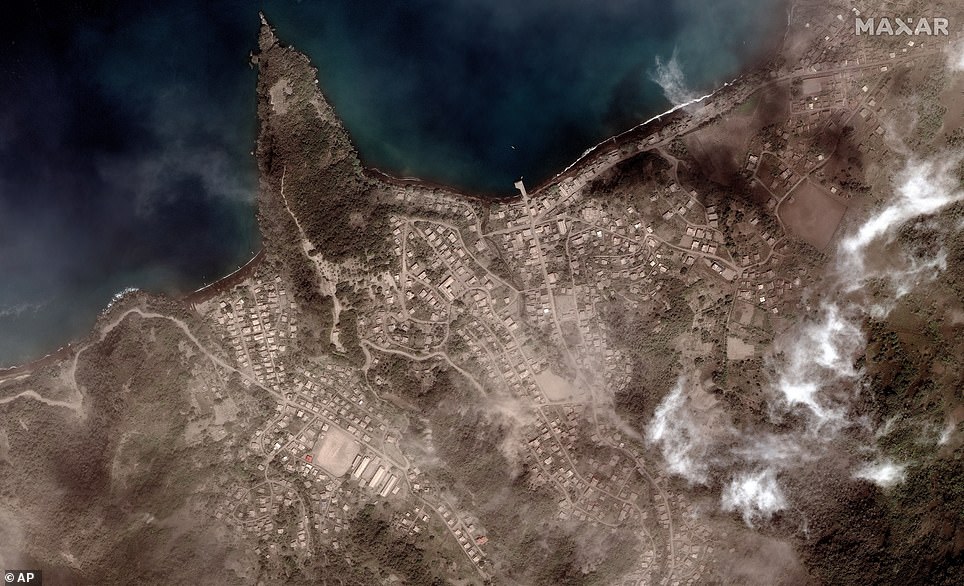 BEFORE AND AFTER: Satellite images reveal how St. Vincent has been completely blackened by ash as La Soufrière volcano continues to blow on an almost daily basis and residents are facing 'chronic water shortages' 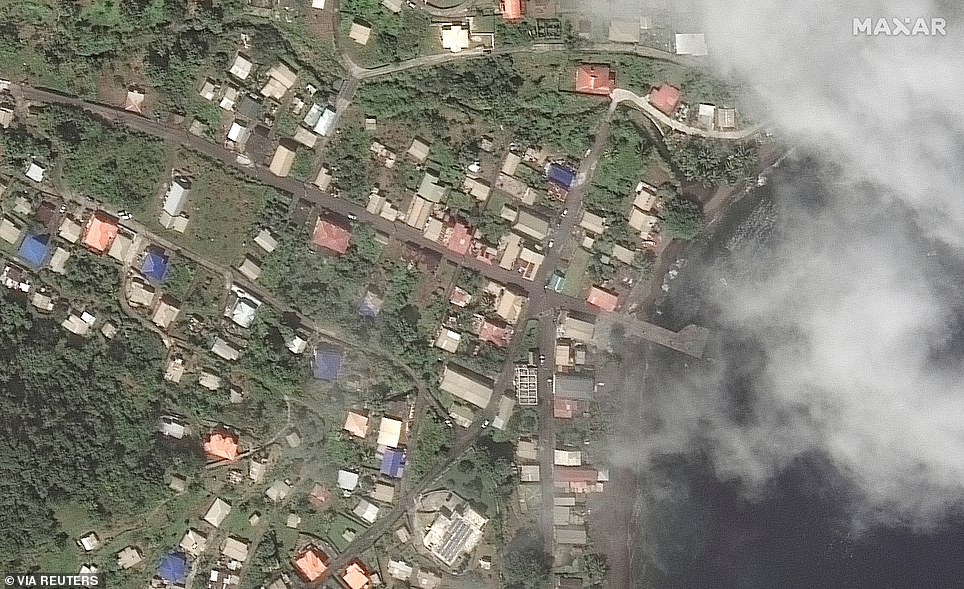 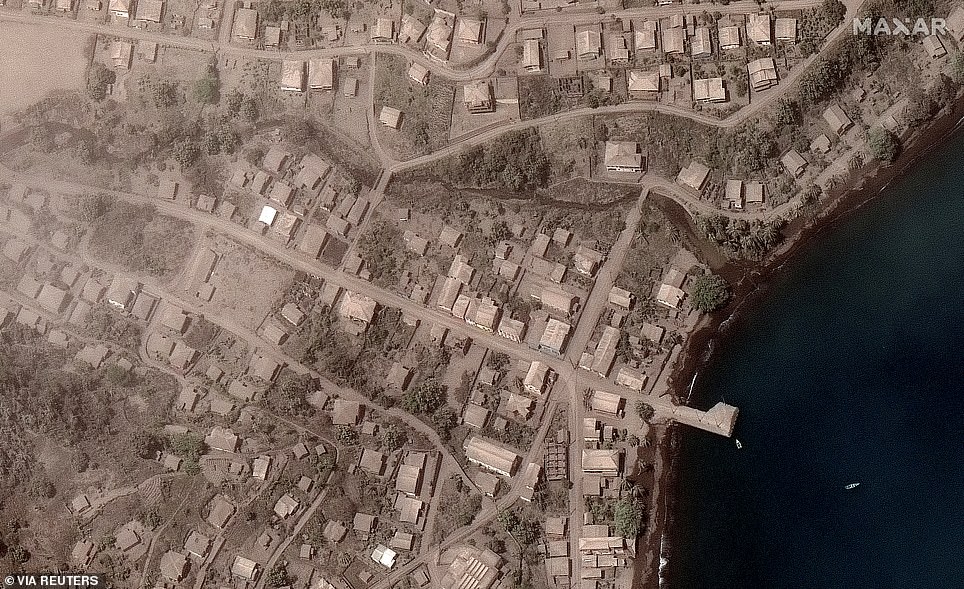 BEFORE AND AFTER: Aerial photos taken Tuesday show the Richmond Vale waterfront in Chateaubelair, just south of the volcano almost unrecognizable from images taken just two weeks before on April 2

The volcanic hazard map shows the different zones. Around 20,000 have been evacuated from the red zone

At least one of these cases was reported in a shelter, meaning around 20 people have been exposed to the virus, she said.

Prime Minister Ralph Gonsalves said the lack of water was adding to the risk of a new wave of the virus as he urged people to follow Covid safety precautions.

'If we're not careful, we're going to have a spike, which could create a real danger in addition to what we're having with the volcano,' he said.

'Washing your hands when you don't have a lot of water is problematic.'

Gonsalves previously said only people who had received the Covid vaccine could board cruise ships sent to the island at the weekend to transport them to neighboring islands.

No deaths have yet been reported since the first eruption Friday.

GoFundMe campaigns have been set up to donate funds and supplies to those worst affected, while pop star M.I.A has also launched an appeal.

Neighboring islands have shipped emergency supplies to St. Vincent and the Barbados Defence Force sent in 30 troops to provide on the ground support.

But these islands have also been impacted by the volcano's eruptions with the ash blowing across the sea to the Grenadines as well as further afield to Barbados, where both locals and tourists are stranded due to the closure of Grantley Adams airport.

The airport first shuttered on Sunday due to limited visibility from the ash, with officials announcing it will stay closed until at least noon on Friday as a gray haze continues to hover over the capital Bridgetown.

La Soufrière began rumbling back in December, with the explosions of recent days marking the first since back in 1979.

'It's the will of the country': Nicola Sturgeon warns Boris Johnson not to block independence vote

Teenager, 18, dies after falling on mountain walk down 100ft slope to see waterfalls with friends

Horrifying moment grandmother is grabbed off street by her suspected killer

Green list: Here's everything you need to know about where we can travel after May 17

Children who grow up living near green spaces may have lower risk of developing ADHD, study finds

The one woman who managed to tame Sam Newman is dead - so where does he go from here?

Nobody knows what Keir Starmer would do as PM, says Janet Street-Porter

Baptist church-going husband, 41, shoots dead his wife, 36, then himself in murder-suicide

Cop who claimed he was bullied is sacked after extraordinary rant

UK weather: Britain is hit by 60mph winds and five inches of rain on washout Saturday

Pictured: 'Cheeky and funny' boy, 15, stabbed to death as two teenagers are charged with his murder

How to re-adjust to socialising and maximise the pleasure of going out, experts reveal

Election 2021: Nicola Sturgeon fights to hold on to her majority

Children are approached by men in four separate incidents in Bromley

Parents transformed their garden into an adventure park

Montego, Maestro and Metro are the 1980s Austin cars on the brink of extinction

Five mistakes to avoid when it comes to IR35

'I launched an award-winning coffee gin from my kitchen... in the middle of a pandemic'

American Express offers Gold cardmembers £10 back with Deliveroo every month

China has been preparing for WW3 with biological weapons for last six years, US investigators say