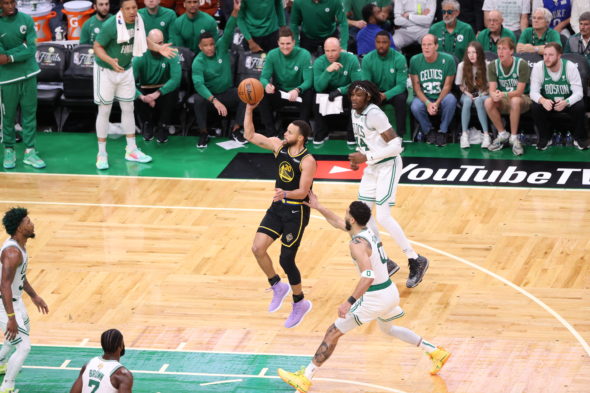 BOSTON (AFP) – Stephen Curry produced a dazzling 43-point display as the Golden State Warriors battled past the Boston Celtics, 107-97, to level the NBA Finals series at 2-2 on Friday.

With the Warriors needing a victory at Boston’s TD Garden to avoid going down 3-1 in the best-of-seven series, Curry delivered one of the best performances of his glittering career to reignite Golden State’s hopes of a seventh championship.

Curry had entered game four with concerns swirling over his fitness after suffering a knock to his foot in the Warriors game three defeat on Wednesday.

But the 34-year-old two-time NBA Most Valuable Player emphatically laid to rest any doubts about his fitness as he single-handedly hauled Golden State back into the finals with game five back in San Francisco on Monday.

Curry finished with 43 points, 10 rebounds and four assists on a night when Golden State again struggled to find their offensive rhythm for long periods against a powerful Boston line-up.

Klay Thompson added 18 points for the Warriors while Andrew Wiggins produced 17 points and 16 rebounds in a crucial contribution. Jordan Poole added 14 from the bench.

“A lot of pride in our group, a lot of talk over the last 48 hours about how we can get back into this series,” said Curry.

“It’s crazy because I still feel we can play a little bit better. But to win on the road and get home court advantage back, is big for this group. We’ve been here six times, we’ve got a lot of experience of staying confident and composed.

“I’m just thankful for everyone on our team because we brought a lot of toughness and physicality tonight.

“We knew how big this game was. For us to come out and do what we did and go home. That five-and-a-half hour flight home got a little better after tonight.”

Warriors coach Steve Kerr, meanwhile, took the bold decision to remove Draymond Green from the fray during the fourth quarter before returning him to the court for the closing passage of play.

Green again struggled on offense with only two points but finished with nine rebounds, eight assists and four steals.

But the undeniable man of the hour was once again Curry, a model of clear-headed composure as bedlam raged around Boston’s raucous arena.

“Just stunning,” was how Kerr described Curry’s performance. “The physicality out there is, you know, pretty dramatic. I mean, Boston’s got obviously, best defense in the league.

“Huge and powerful at every position, and for Steph to take that — that kind of pressure all game long and still be able to defend at the other end when they are coming at him shows you, I think, this is the strongest physically he’s ever been in his career, and it’s allowing him to do what he’s doing.”

Boston had led by four points at 94-90 with just under five minutes remaining before a Wiggins layup and a Thompson three-pointer put Golden State up 95-94. Curry then extended the lead with a layup to make it 97-94 before driving in the dagger with a three-pointer to leave the Warriors 100-94 ahead.

Al Horford cut the deficit for Boston with a corner three, but Kevon Looney’s layup restored the Warriors’ five-point cushion.

Curry then closed out the game, cleverly drawing fouls from Boston to nail five points from the free throw line.