Some decisions of the Supreme Court and of Ombudsman Samuel Martires dealt blows to democracy too, says Christian Monsod

MANILA, Philippines – Philippine President Rodrigo Duterte may be exiting the presidency on June 30, but not before putting Asia’s oldest democracy on a “slippery slope to authoritarianism,” one of the framers of the 1987 Constitution said in a Rappler Talk interview.

Lawyer Christian Monsod pointed to the damage wrought by Duterte on key components of a democracy: rule of law, a system of checks and balance, an independent judiciary, and a free press. 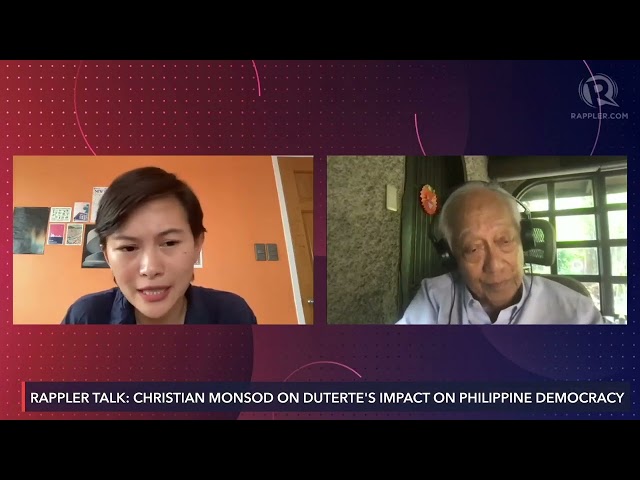 “I think he has violated his oath of office because if you look at the oath of office of a president, he consecrates himself to fulfill his duties and he is supposed to protect and defend the Constitution, and he is supposed to do justice to every man. You know, he did not do justice, for example, for [Senator Leila] de Lima who is still in detention today,” said Monsod in the interview aired on Tuesday, June 7.

De Lima, a fierce Duterte critic who probed the President’s drug war, was arrested in February 2017 over what she called “trumped-up” drug charges. She has been detained since then, amid calls for her release, especially following the move of government witnesses in these drug charges to recant their earlier testimonies against her.

Monsod, who helped craft the Philippines Constitution as the country emerged from the three-decade regime of Ferdinand Marcos, listed down the ways Duterte dealt blows to democracy:

Duterte, said Monsod, was a man who changed the Philippine presidency in a fundamental way as he tried to “test the boundaries” of presidential power.

But Duterte didn’t do it alone.

Monsod said Duterte was aided by the Supreme Court (SC) through two crucial decisions the Court made in relation to his powers: affirming the repeated extensions of martial law in Mindanao and upholding most of the feared Anti-terrorism Act of 2020.

In a 2017 landmark ruling, the SC decided that the President has the sole prerogative and discretion to declare martial law and decide on its scope. It also said Duterte or any Philippine president can declare martial law over the entire country if they felt the need to.

Monsod was one of the petitioners who opposed the re-extension of Duterte’s martial law. He called the SC’s decision “questionable” and an instance when it “abdicated” its powers to serve as a check on the President.

“If you go through that decision, I believe the Supreme Court did not exercise the powers given to it by the Constitution to prevent precisely the use of martial law for the wrong reasons,” said Monsod.

The anti-terror law, mostly upheld by the SC, is a similarly “dangerous” policy that can now be used by future presidents, to the detriment of democracy, he said.

The law gives the anti-terror council, a body answerable to the President, the power to order the arrest of suspected terrorists and detain them for as long as 24 days. Groups contested this because in the Revised Penal Code, the maximum detention of a person arrested without warrant is only 36 hours, and under the Constitution, three days if under a state of martial law.

“That 24 days is going to be used to extract information from the detained person. That’s not the purpose. The purpose of the warrant of arrest is you already present evidence to the court of the basis of the warrant which means you already have the information,” said Monsod, explaining the need for judicial intervention which the law effectively does away with for as long as 24 days.

“I think the Supreme Court decisions are a bad precedent for the next administration because, as I said, now martial law can be declared anywhere in the Philippines at any time,” said Monsod.

The Office of the Ombudsman, under former SC justice Samuel Martires, was another institution that Monsod criticized for supposedly losing sight of its constitutionally enshrined mandate. Martires was appointed by Duterte to the post of Ombudsman, an official who is supposed to investigate and prosecute government officials accused of graft and corruption.

“The Ombudsman, in his early decisions, seem to be more concerned about protecting government officials from criticism than he is of protecting the rights of the people against abuses of government,” said Monsod about Martires.

He was referring specifically to Martires’ decision to restrict access to the document where government officials must truthfully report their wealth – the Statement of Assets, Liabilities, and Net Worth (SALN). Before Duterte’s time, presidents would make public their SALNs without much ado. Duterte has kept his secret since 2018.

Now, what is supposed to be a public document to guard against corruption can only be accessed by a journalist or citizen if the government official allows it.

The Philippines has a “long way to go” in repairing the damage wrought by Duterte on democratic institutions, said Monsod. To restore trust in these institutions, Monsod said government and society must focus on closing the gap between the rich and the poor who feel that democracy has done them no favors.

“Democracy has failed the poor. Democracy has not been kind to our poor. And I think that’s part of the response in the last elections of the people, that there is a very deep frustration and anger at the inability of administrations after EDSA to deliver on the promise of a new social order,” said Monsod.