Bongbong Marcos Jr. ‘welcome’ to US given his ‘diplomatic immunity’- top official 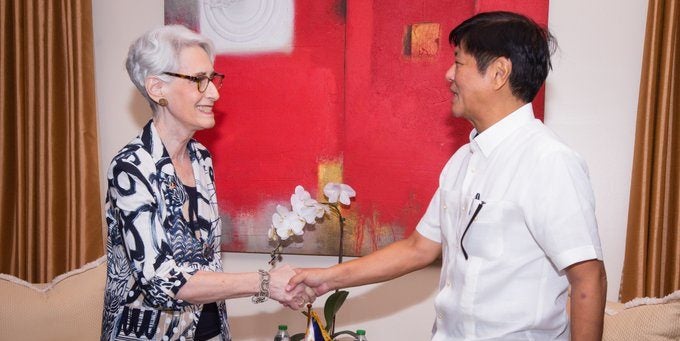 MANILA, Philippines — President-elect Ferdinand “Bongbong” Marcos Jr. would be “welcome” to the United States given his diplomatic immunity as a head of state, a top Washington diplomat pointed out Thursday,

“The fact is when you’re a head of state, you have immunity in all circumstances and are welcome to the United States in your official role,” U.S. Deputy Secretary of State Wendy Sherman told reporters in a roundtable discussion in Pasay City when asked on the matter.

Before this, she capped off a day of meetings with Philippine officials, including Marcos Jr. and outgoing Foreign Affairs Secretary Teodoro Locsin Jr.

“When someone is the head of state, they have [diplomatic] immunity and would be welcome to the United States,” Sherman added.

In 2012, a U.S. Court of Appeals for the Ninth Circuit handed down a contempt judgment against Marcos Jr., his mother Imelda, and the estate of Ferdinand Marcos Sr. for violating an injunction that barred them from dissipating assets of the estate. The contempt award meant that the Marcoses would not be allowed to set foot on any U.S. territory.

Thousands of martial law victims also won a class action lawsuit for human rights violations against the estate of dictator Marcos Sr. in Hawaii in 1986, where they were awarded close to $2 billion.

Sherman, meanwhile,  stressed the “robust” relations between Manila and Washington, which spans 75 years.

She met with Marcos Jr. earlier in the day and had a “positive” and “productive” meeting, wherein they discussed a wide range of topics, including ensuring freedom of navigation in the South China Sea and human rights.

So far, Sherman is the highest U.S. official that Marcos Jr. has met since his proclamation as the country’s next president.

“The friendship between the United States and the Philippines runs deep. And so, too, does our shared commitment to upholding and strengthening the rules-based international order,” Sherman told reporters.

“The Philippines has been a leader and a champion for upholding freedom of navigation in the South China Sea in the face of increasing encroachments,” she said.

“The United States remains committed to standing with the government of the Philippines to uphold the rules and laws underpinning the international maritime order, and we have spoken up against infringements of the Philippines’ sovereign rights,” she added.