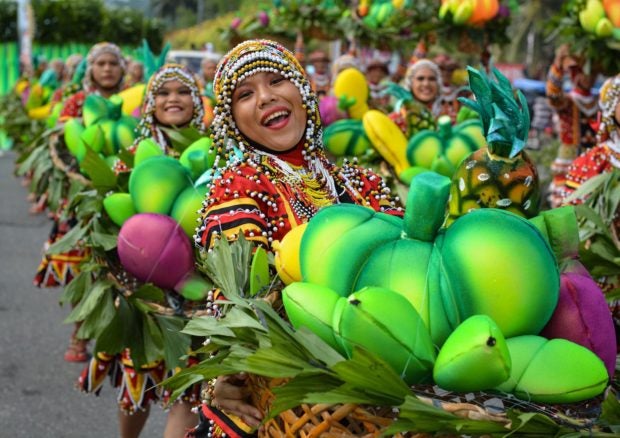 The winning photo of Alex Celo from Bayugan City at the photoshoot contest during the Naliyagan Festival 2019 celebration. The photo shows a delegation from Bayugan City participating in the Tribal Street Dance contest. (Photo used with permission from Agusan del Sur Provincial Tourism Office)

PROSPERIDAD, Agusan del Sur — After two years of hiatus due to the pandemic, the provincial government here will celebrate the week-long Naliyagan Festival from June 12-17 in the same grand tradition but with the observance of strict health measures to prevent the spread of COVID-19.

Most of the cultural, entertainment and sporting events, and live concerts will be held at the traditional and vast Naliyagan Plaza.

The festival is the biggest crowd-drawing event in the province, and local leaders are using it as an opportunity to further expand COVID-19 vaccination coverage.

Agusan del Sur Gov. Santiago Cane Jr. said aside from police and personnel, nurses and doctors will also be deployed at the entrance gates to offer injection of second dose of COVID-19 vaccine for those who are only partially vaccinated.

After getting their vaccine shots, these festival-goers can be allowed to get inside the venue.

Cane explained that strict measures are needed to prevent new COVID-19 infections as the province is still under alert level 2 category owing to the failure to achieve a vaccination coverage equivalent to 70% of the local eligible population.

Festival organizers are making sure that health protocols, like wearing face masks and frequent washing hands with alcohol or water and soap, are encouraged inside the venue.

Cane said this year’s celebration would not be as grand as in the past years, with some events pared down such as the crowd-drawing tribal street dance competition.

Taking center stage during the festival is the beauty pageant with all localities sending their bets for the coveted Bae Sabuyakan and Bae Naliyagan crowns. The province has invited Miss Universe 2015 Pia Wurtzbach to grace the coronation night although she has yet to confirm her attendance.

Popular bands in Manila like Aegis, pop-rock sensations Ben&Ben, and rock bands Silent Sanctuary and Kamikaze will perform on separate nights to entertain their fans.

Cane said former palace spokesperson Harry Roque had signified his interest in attending the governance night on June 14 where he will be the guest speaker.

The governor will deliver his State-Of-the-Province Address on the morning of June 17, followed by a formal oath-taking ceremony of the elected provincial officials and the two congressmen of the province.

The famous “Binaga Festival,” the grilling of mudfish, locally called haloan from the Agusan Marsh, will be held in a long line of grill stands in the afternoon.