The 15-year-old sensation was on fire once again as his side thumped Rot-Weiss Essen 6-0 in their Bundesliga U19 clash.

The result ensures Dortmund maintained their 100 per cent start to the season with a fourth win from four matches.

And in all four Moukoko has smashed in a hat-trick.

The striker may be four years younger than some of his team-mates but is wearing the captain's armband... and leading by example.

He grabbed three against Preußen Munster, SV Wehen and Schalke - plus an assist agains the former - before continuing his hot streak today.

It means he has now scored 13 goals already this term - out of 17 for Dortmund U19s.

Moukoko is on course to become the youngest player to appear in the Champions League after being named in the B-list for Lucien Favre's first team.

Moukoko's 16th birthday is on November 20.

But even with rules preventing players featuring until they turn 16, the youngster may not have to wait very long to make his European bow.

Celestine Babayaro holds the current Champions League record, having started for Anderlecht against Steaua Bucharest in the 1994-95 group stage, aged 16 years and 87 days.

The youngster struck four times in seven Uefa U19 Youth League outings last term and was given permission to skip school to start training with the first team.

And it did not take him long to impress 'veteran' striker Erling Haaland, 20, who said: "I don't think I've ever seen a 15-year-old that good. 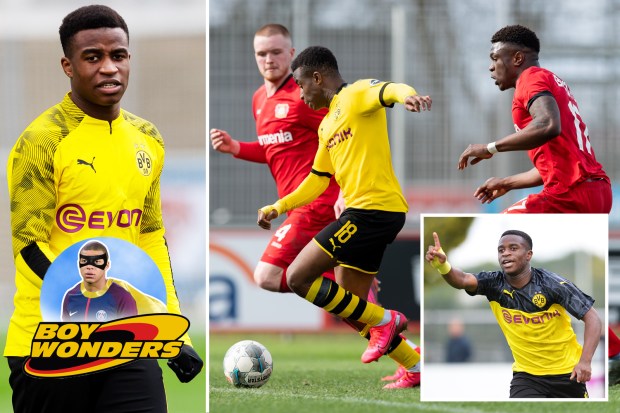 By Sam Morgan and Jon Boon

IF YOU think Borussia Dortmund wonderkids Mario Gotze and Christian Pulisic were top drawer, wait till you see the latest kid coming through their ranks.

Youssoufa Moukoko, their 15-year-old sensation, is currently the hottest prospect in Germany - shattering Bundesliga goalscoring records at U17 and U19 levels in consecutive seasons.

Unknown stories about Diego: as a child, there was not enough food for the whole family, my mother skipped dinner, at the first job I poisoned cockroaches
Pele on Maradona's death: I lost a great friend and the world is a legend
Due to Maradona's death, Boca juniors' playoff game in the Copa Libertadores was postponed for a week
Sterling's heel gave an assist to Foden in the Champions League match with Olympiacos
Messi on Maradona's death: he will stay with us because he is eternal
Jurgen Klopp: I Don't understand why you can let 2,000 people into the stadium for 60,000 spectators and the same 2,000 into the arena for 9,000
In honor of Maradona can rename the stadium of Napoli
Source https://www.thesun.co.uk/sport/football/13012939/borussia-dortmund-youssoufa-moukoko-four-goals/