Dua Lipa has topped the winners at the 2021 Brit awards, calling for Boris Johnson to approve “a fair pay rise” for frontline NHS staff as she picked up gongs including the top prize of British album for her chart-dominating disco spectacular Future Nostalgia.

She also won female solo artist, bringing her total Brit award tally to five and cementing her position as one of the UK’s most successful and critically acclaimed pop stars.

Receiving the latter award and addressing the 2,500 key workers given tickets to the show, she said: “It’s very good to clap for [frontline NHS staff], but we need to pay them,” as she dedicated her award to nurse and healthcare pioneer Dame Elizabeth Anionwu.

She later dedicated her album award to Folajimi Olubunmi-Adewole, the 20-year-old man who died after attempting to save a woman who had fallen in the river Thames in April. She called for a bravery award to be made to him and Joaquin Garcia, who also attempted a rescue and survived along with the woman. 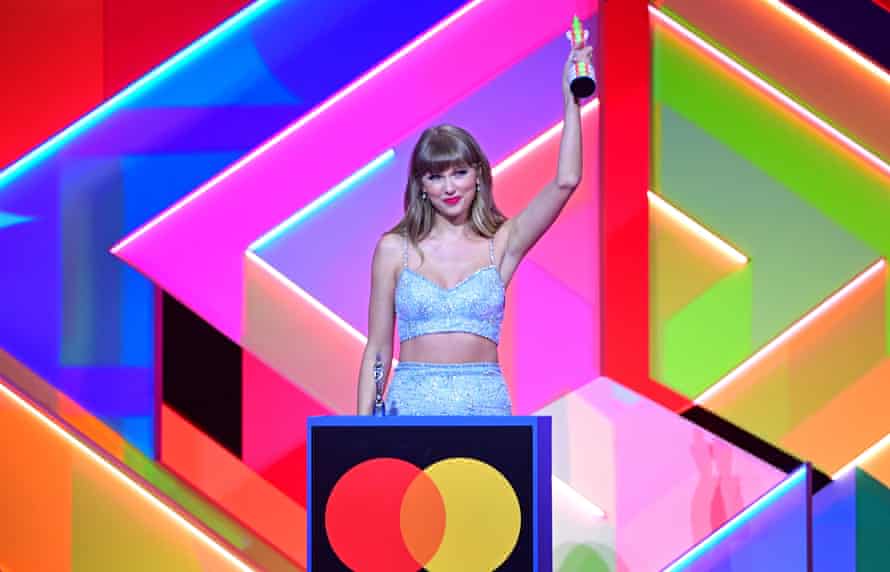 The 2020 Brit awards were widely criticised for their heavy bias towards male artists, with only one British woman – pop singer Mabel – nominated across 25 slots in the mixed-gender categories. There has been an emphatic reversal in 2021, with Lipa among a diverse range of female winners.

Little Mix became the first all-female band to win the British group award, with Five Star in 1987, Stereo MCs in 1994 and Gorillaz in 2018 the only previous category winners to feature women.

Little Mix’s win crowns a career that began on TV show The X Factor 10 years ago, with six UK Top 5 albums since, plus 16 Top 10 singles, five of those reaching No 1. The group are expected to now go on hiatus, with members Perrie Edwards and Leigh-Anne Pinnock each announcing pregnancies this month, and founder member Jesy Nelson leaving the group in December.

Pinnock said on receiving the award: “It’s not easy being a female in the UK pop industry. We’ve seen the white male dominance, misogyny, sexism and lack of diversity. We’re proud of how we’ve stuck together, stood our ground, surrounded ourselves with strong women and are now using our voices more than ever.”

Los Angeles trio Haim won international group, the first all-female group to do so in nearly two decades following Destiny’s Child’s win in 2002. Billie Eilish won international female, pop singer Griff won the rising star award, and Taylor Swift became the first woman to receive the global icon award, previously won by David Bowie, Elton John and Robbie Williams. “There is no career path that comes free of negativity,” she said on receiving the award in person. “If you’re met with resistance that probably means that you’re doing something new.” 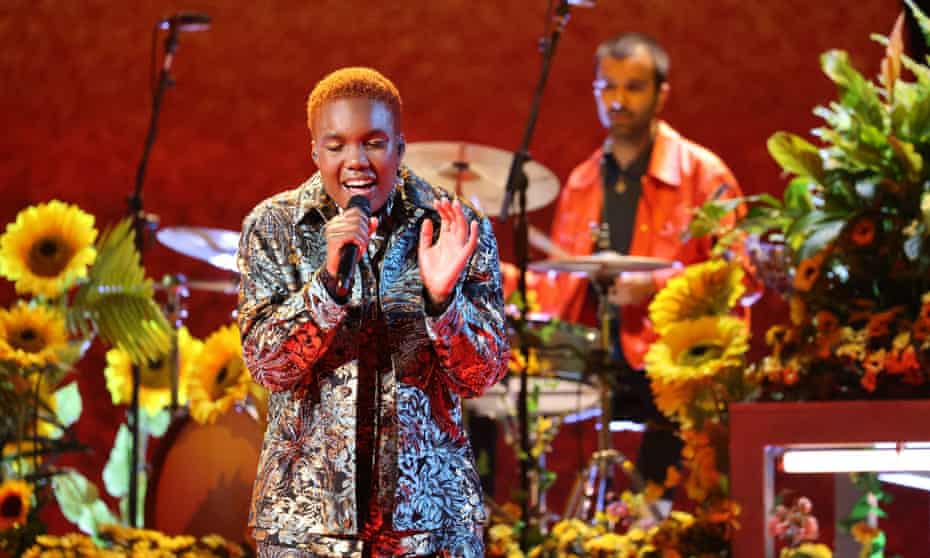 Twenty-year-old Arlo Parks won breakthrough artist, having released one of the most admired albums of the year so far with her debut Collapsed in Sunbeams, blending trip-hop and soul in songs full of emotive storytelling.

She had been nominated for three awards and also performed at the ceremony, telling the Guardian beforehand: “It feels pretty crazy, and I think it hasn’t fully sunk in. I’ve been doing a lot of preparation and rehearsals, and it feels beautiful putting the time into constructing something that is like a step towards bringing gigs and concerts back. When they do come back properly they will be even more special because these songs will have grown roots in people’s lives and will have soundtracked such a difficult time.”

Each year this century, at least half of the winners in the mixed-gender categories have been men, but in 2021, six out of seven are women. The celebration of female talent follows similar recognition at this year’s Grammy awards, where Eilish, Swift, Megan Thee Stallion and HER won the top four awards, and where Lipa won one of her six nominations, for best pop vocal album.

Lipa couldn’t sweep the board at the Brits though, and was beaten to British single by Harry Styles with his song Watermelon Sugar, an enduring hit since its release in November 2019 that has spent 62 weeks in the UK chart in total. 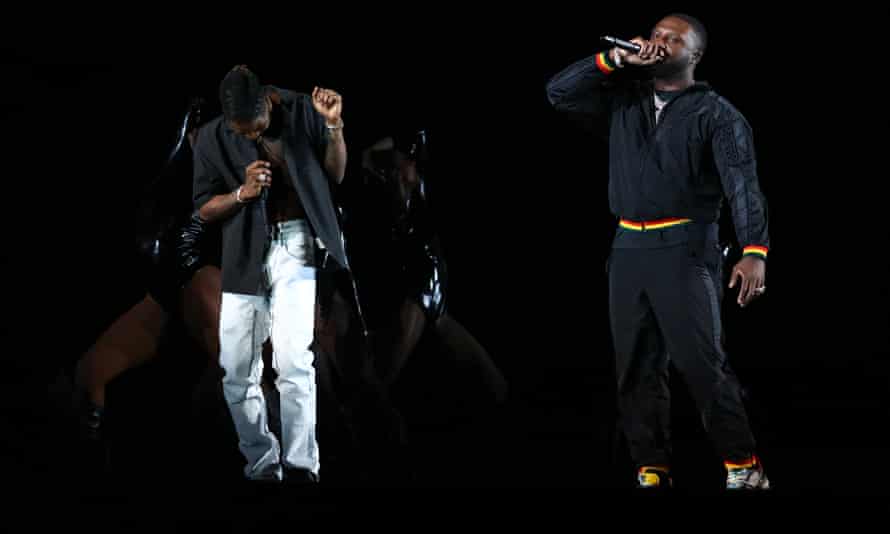 Headie One got in a jab against Boris Johnson’s government. Photograph: JMEnternational for the Brit awards/Getty Images

He also addressed the key workers in the audience, saying: “​Thank you for everything you did for this country”, while Headie One and AJ Tracey added new lyrics to their hit track Ain’t It Different, rapping: “Team work keeps the dream working. It’s only right we show love to the key workers.” The pair also got in a jab against Boris Johnson’s government, “saying eat out to help out but won’t help out [Marcus] Rashford when he’s feeding the youths”, while performing on a stage set designed by Louis Vuitton artistic director Virgil Abloh.

British male was won by J Hus, the east Londoner whose sophisticated blend of rap with African pop production cohered on his No 1 album Big Conspiracy.

International male was won by the Weeknd, who was snubbed at this year’s Grammys, earning zero nominations despite having one of the year’s biggest global hits with Blinding Lights. He also performed at the Brit awards via video, and his award was presented to him with a video message by Michelle Obama.

Rag’n’Bone Man closed the show alongside Pink and the Lewisham and Greenwich NHS Trust Choir. Prior to the event, the British blues-soul singer told the Guardian he was honoured to share the stage with key workers, and added: “It’s been difficult not having the kind of output that I usually have, being able to stand on stage and let everything out. I really feel for people where [live performance] is their livelihood, especially if you’re at a certain point in your career where you have to do a lot for so little – I know what that feels like. I think they’re the people that are most affected.” 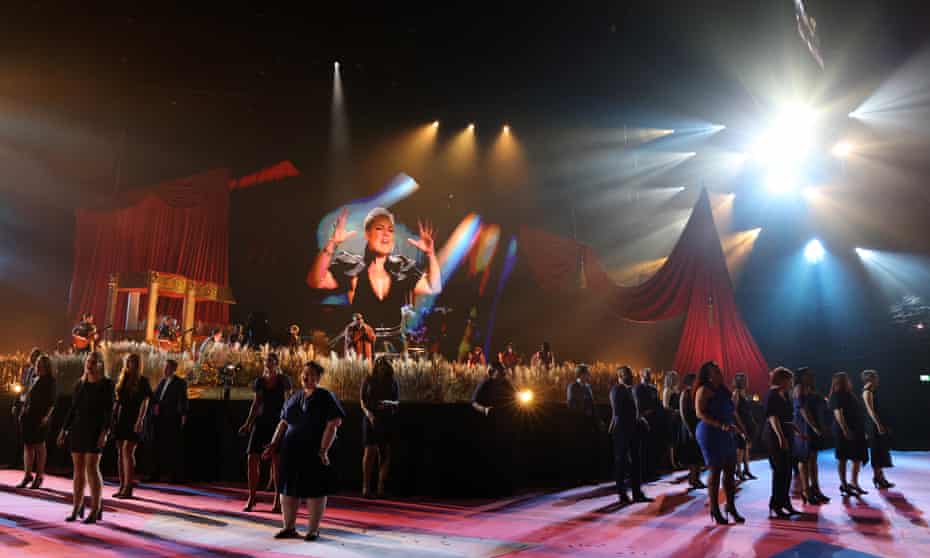 Pink and Rag’n’Bone Man perform with the Lewisham and Greenwich NHS Trust Choir. Photograph: JMEnternational for the Brit awards/Getty Images

The 2021 Brits was the first large-scale indoor event to be held as part of a government-led research programme into how crowds can return safely to events. Scientists monitored the event and tracked any potential areas of contamination. “The learnings that the government will get out of this will be very important and hopefully will allow them to inform their approach and policy going forward,” said a Brit awards spokesperson.

Hannah, a 26-year-old nurse who was attending the awards, said that it felt like a long overdue party after what has been a difficult year. “I can’t believe I’m actually here”, she says. “It’s so nice to have an evening out to dress up and dance, although it does feel strange as we’re not completely out of the thick of it. But it does feel like the difficulties over the past year are ending.”

FA Director of Diversity on whistling to kneelers: If you're a racist, don't report it out loud. How would you feel if you booed your child?
Eden Hazard: I will not leave Real Madrid by failing. I want to show that I was created for this club
Argentina midfielder de Paul: Messi exists in a different dimension, but remains a human being. When he is around, everything is easier
Coman wants to leave Bayern. He is unhappy with the salary and the fact that he is not given the number 10
Soucek apologized for the words about racism and Kudel: My statements are misunderstood. I am against racism in any form
Bayern President on transfers: There must be more common sense in football urgently. So many clubs are living beyond their means
The Croatian national team will not take a knee before the Euro 2020 matches