Woman fined £300 for refusing to leave Borough Market when asked

A woman who could not access a coronavirus fine because it was sent to her office during lockdown has been forced to pay hundreds of pounds by a judge.

In one of dozens of cases about Covid breaches heard in court on Friday, Jessica Cosson was ordered to pay a fine and court costs of £319, after she had remained in London’s Borough Market with a friend despite been asked to leave by police.

City of London Magistrates’ Court also heard that two men will face trial for allegedly organising a rave in November, while another man was accused of sending a suspicious package to a vaccine site. Another defendant did not appear in court as they were suffering from symptoms of the virus.

Cosson told the court that she had been moving house at the time and had asked for the fixed penalty notice to be sent to her work address after the incident on the evening of November 18.

The 29-year-old, from Romford, missed the deadline to pay and was issued a court summons because the circuit breaker lockdown imposed before Christmas meant her office was closed and she was unable to collect her post.

Magistrate Andrew Hammond said: ‘These are extraordinary times we are living through and the pandemic and lockdown are matters of literal life and death to some people.

‘Those who do not comply and do not follow the instructions of the police when told to go home risk the safety and wellbeing of others.’

It was one of 63 cases of coronavirus legislation breaches listed at the court on Friday.

Many of the 43 defendants told to attend court for 10am failed to turn up, although some entered guilty pleas via email and another was suffering Covid-19 symptoms.

Robert Bagot and Henok Yefru, both 32, are accused of helping to organise a rave in Deptford, south London, on November 22 last year.

Both Bagot, of Ilford, and Yefru, of Leyton, accept being present but both denied a single count of holding or being involved in holding a rave-type gathering in England of more than 30 people indoors – an offence with a maximum fine of £10,000.

The Court heard that one of the issues in the case, listed for trial on July 19 at Westminster Magistrates’ Court, will be whether lending sound equipment to the rave would meet the definition of being organisers of the event.

Magistrate Mr Hammond suggested the trial should be given a longer time slot than usual, due to the fact both solicitors and magistrates are ‘unfamiliar with this (coronavirus) legislation’.

Days devoted entirely to offences under Covid-19 legislation could potentially become a regular event at City of London Magistrates’ Court, similar to the way it has previously been used to prosecute Extinction Rebellion demonstrators.

Elsewhere, Anthony Collins, 53, pleaded not guilty to the charge of dispatching an article by post with the intention of inducing the belief it was likely to explode or ignite, during a hearing held at Maidstone Crown Court.

All staff at the vaccine producing Wockhardt site in Wrexham, North Wales, had to be evacuated on January 27 as the package was investigated.

Production ground to a halt at the Wrexham site as the item, which police said was not a viable device, was investigated. 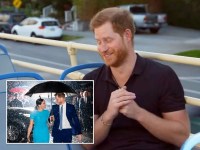 Prince Harry reveals moment he knew Meghan was 'the one'

Collins, from Kent, appeared by video link from Elmley Prison wearing a mask for the short hearing.

Judge Stephen Thomas adjourned the case for trial to be held on August 31 with a pre-trial review on August 13, and remanded Mr Collins in custody until then.

Meanwhile, Mohammed Haidaire, 25, was ordered to pay £388 in fines and costs after being caught with three other males in a car in Gants Hill, south London, November 10, several miles from his address in Bellingham without a reasonable excuse.

Other charges include being involved in holding a gathering of more than 30 people in private dwelling; participating in a gathering in public outdoor place of more than two people; failing to wear a face covering when using a public transport service in England without reasonable excuse, and failing to close restricted business or service between 10pm and 5am during emergency period.

MORE : Hope for holidays as Covid vaccine passports ‘to be in place for summer’