House-proud residents across the borough are always going the extra mile when it comes to curbside appeal, but this house in Willaston has taken their garden hedge to the next level.

Residents and dogwalkers in the area will likely be familiar with this enormous but jolly-looking character, who watches over it's owner's home.

However, this is not an extravagant lockdown project, but the comedic legacy of the owner's husband, as the Globe discovered when we spoke to her.

Susan Sanderson said: "He had a very weird sense of humour. We lost him eight years ago, but my son's carried on keeping it neat and tidy.

From the side it looks like a caterpillar, but it's actually whatever you want it to be

"Everyone seems to enjoy it that goes past. We've seen it on Google in Scotland and there was a lady outside the other day who said that she sent some photographs of it to someone in Australia and they thought it was wonderful."

Susan's late husband, John Sanderson, made his animal-like creation, which features a rabbit nestling on its long back, around 15 years ago.

The real answer however, is much more simplistic. 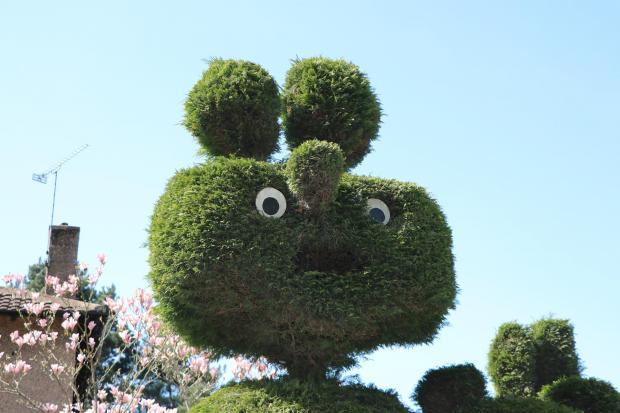 The beady-eyed hedge creature used to have a long tongue, until it was stolen by kids

Susan said: "It's whoever or whatever you want it to be. That's what we always say if anybody asks!

"I went out one day and came home and it was there. I said to him "What have you done?" He said "well I like it".

"He obviously had it on his mind, when he got up of a morning, that he was going to do it. He kept asking me when I was going out and telling me to hurry up. Then I came back to that."

This bizarre garden masterpiece was the work of the late John Sanderson. His wife said he had a 'weird sense of humour'

The hilarious huge hedge monster sports a large pair of beady eyes and did originally have a tongue before it was taken by mischievous kids.

Despite the upkeep undertaken by Susan's son, who works in the building trade, and supported by her daughter, who works for Chester Zoo, constant reminders of her fun-loving husband mean that the monster hedge bug is here to stay.

When asked about the recent controversy surrounding another garden character, Colin the Caterpillar, Susan said: "It's so ridiculous. Marks & Spencer have made themselves look so stupid. Well I think so anyway!"

Man, 81, who beat Covid thanks 'Angels of the North' for saving his life