Why did Caprice Bourret miss Dancing on Ice and has she fallen out with partner Hamish Gaman?

Here's a look behind what's going on behind-the-scenes at the ITV series amid rumours she's fallen out with pro skater Hamish Gaman...

Why did Caprice Bourret miss Dancing On Ice on Sunday?

Dancing on Ice's Caprice did not take to the ice as expected on Sunday (January 19).

Explaining why she was absent, host Holly Willoughby said: "Unfortunately Caprice and Hamish have parted ways and will not be skating this week.

"As you saw in our opening number, Hamish remains very much part of our professional team and we hope to have Caprice back on the ice next week."

Despite the setback, Caprice is now back in rehearsals preparing to return to our screens this Sunday (January 26).

A spokesperson explained in a statement:  “We're pleased to say that Caprice is back on the ice today in training and very much working towards returning to the show on Sunday night.”

Why did Caprice and Hamish fall out?

So far, the only details either party has revealed is that it was a mutual decision to stop working together.

However, before the row was made public, Capris did hint that she could be difficult to work with due to her fiery temoer.

Speaking to OK! magazine, she said of her Dancing On Ice co-stars: "It's funny because honestly we all get on really really well and we're all such people from different fields and different worlds.

"Right now we're all having a laugh, but once we start competing seriously and we get a bit more down the line, who knows? You may have the dramas then."

Who is Caprice partnered with now?

BBC bosses are yet to confirm who Caprice will dance with next.

What was do know for sure however is that Caprice will not be taking to the ice with Hamish.

This Sunday, fans will see her with a brand new dance partner.

Have I seen Caprice Bourret on TV before Dancing On Ice?

If Caprice hasn’t already got her fingers in enough pies, she has also tried her hand at acting.

The American TV personality also turned her hand to British soap operas, joining the cast of Hollyoaks: After Hours for two episodes.

Fans of The Dream Team might have spotted Caprice in the series in 1999.

The Sky 1 show followed the adventures of fictional Harchester United Football Club, when she played the role of Dani West.

In addition, her years of experience in the modelling industry have made Caprice the perfect candidate for a TV judging panel.

In 2007 alone, she was a judge on Sky 1’s Project Catwalk and Britain’s Next Top Model.

As well as being on the judging panel, Caprice isn’t afraid to throw herself into a bit of healthy competition.

In 2008, she attempted to cook up a storm on Come Dine With Me, when she finished in joint second place with Jimmy Osmond.

She was also one of fifteen celebrities to appear in diving show Splash! in 2013.

Caprice appeared in the first series of Ladies Of London, when she and her surrogate were pregnant at the same time.

Is Caprice married and does she have kids?

Caprice started her relationship with millionaire financier Ty Comfort in 2011, after the pair were introduced by a mutual friend.

The couple married in December 2019, just before Caprice's Dancing On Ice debut.

The couple have two children together - Jett and Jax.

A month after deciding to use a surrogate, Caprice discovered she was pregnant - meaning she had two babies in the space of a few weeks.

The model has described Ty as the love of her life, adding: "I have a drop-dead gorgeous partner, so [I have sex] two to three times a week."

Over a decade ago, Caprice appeared in the third series of Celebrity Big Brother.

In the 2005 competition, she battled against celebs Bez, Germaine Greer and John McCririck to win the popular reality show.

Unfortunately, she only lasted until day 16 of the contest, as she was evicted after securing just five per cent of the vote.

How did Caprice do on The Jump?

Caprice competed on Channel 4's The Jump in early 2017, but was forced to quit following a mystery illness.

Although not related to her exit, she fractured her ribs during training after flying off a ski jump.

She revealed: “You are training eight hours a day so I’ve been tired and had bad falls, aches and pains and bruises.

“I hurt my head and fractured my ribs when I was practising the ski jump. As I hit the airbag, my skis bashed against me.”

Caprice was the third person to leave the notoriously risky show through injury, following Vogue Williams, who dislocated her knee before the show even started, and Sir Bradley Wiggins, who broke his ankle.

When did Caprice become a model?

Caprice got her first big break when she was featured in Vogue, which then inspired her to move to the UK to look for more work in the fashion industry.

The world-renowned model was dubbed the sexiest woman by the News of the World, as well as being named Maxim's International Woman of the Year for three years in a row.

You might have also spotted Caprice in her modelling campaigns for Diet Coke and Pizza Hut.

What covers has Caprice appeared on?

As she’s been splashed across over 300 magazine covers in her life, it’s no surprised that Caprice is seen as one of the world’s most photographed women.

She’s posed for dozens of titles, including Vogue, GQ, Cosmopolitan, Esquire, Maxim and FHM, as well as the iconic Swimsuit Issue of Sports Illustrated.

And Caprice still looks as incredible as ever, as she flaunted her abs in a white bikini during a winter break this year.

What about Caprice the businesswoman?

Caprice has proven that she’s got both beauty and brains, as she currently manages a successful business.

She is the owner of By Caprice Home and has also worked in collaboration with one of the UK’s leading department stores, Debenhams.

The model has also attended numerous business events and given masterclasses on how to develop your own brand.

Did Caprice release a single?

In 1999, Caprice was briefly signed to Virgin Records, but her dreams to become a singing sensation didn’t quite go according to plan.

Her debut single, Oh Yeah, reached No24 in the UK album charts.

Two years later she tried again, with her offering Once Around the Sun.

Sadly her musical career didn’t go the same way as her other ventures, as her second single also charted just outside the Top 20 at No24.

Caprice briefly had a record deal, but her music career was shortlived

Did Caprice have a brain tumour?

Yes - Caprice revealed that she underwent a life saving operation for a brain tumour the size of a thumb.

She explained this was the reason she had to quit The Jump back in 2017.

Speaking to Hello! Magazine at the time, Caprice said: “I was diagnosed with a brain tumour. I found out while I was competing in the show and boy, was it more horrific than any of the challenges.”

She now claims the show saved her life after she was made to see a doctor by bosses after suffering headaches and blurred vision.

“The Jump saved my life.

“I had headaches that were not going away and my vision was beginning to act up so the show’s production insisted I see their doctor.” 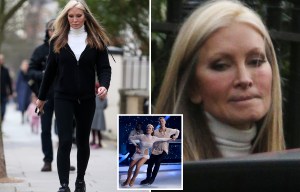 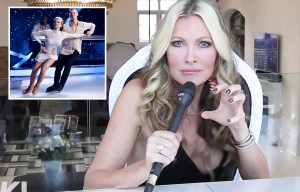 Dancing On Ice's Caprice admitted she can 'cause drama backstage' 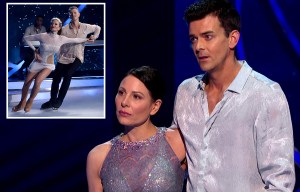 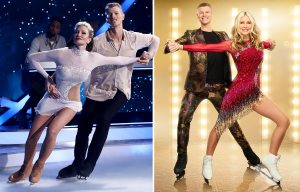 Where does Caprice come from?

She was born in Hacienda Heights, California.

Her mother, Valerie, is American while her father, Dale Bouret, is French-Canadian.