RAPPER Casanova is being sought by authorities in connection with the indictment of 18 people.

Seventeen of the 18 are in custody - but Casanova is not.

Casanova, whose legal name is Caswell Senior, is a rapper currently signed to Roc Nation.

The 34-year-old musician was born and raised in Brooklyn.

Why is he being sought by authorities?

Casanova has been indicted on charges of conspiracy to commit racketeering; conspiracy to distribute controlled substances, and firearms possession.

Authorities said 17 of the 18 named in the indictment were in custody.

Those named in the indictment are allegedly part of the Untouchable Gorilla Stone Nation gang, operating in New York City and part of New York state.

“Members of Gorilla Stone committed terrible acts of violence, trafficked in narcotics, and even engaged in brazen fraud by exploiting benefits programs meant to provide assistance in response to the Covid-19 pandemic," Acting US Attorney Audrey Strauss said in a statement. 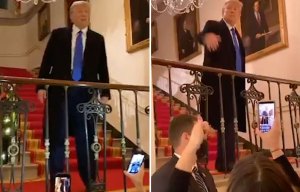 Trump CONFIRMS plan to run again as he tells White House party: 'See you in 4yrs'

Alex Ferguson: Rooney has had a fantastic career. I hope he can be a coach
A Bundesliga club cannot be bought. But Volkswagen was able to
Midfielder Bayer Amiri was called a fucking Afghan. After the match, the Union player apologized
Ozil and Arsenal have agreed to terminate their contract. He will complete the move to Fenerbahce at the weekend
Klopp on Bruno: Outstanding player, leader. Good transfer for Manchester United, unfortunately
Paul Ince: Manchester United can beat Liverpool. Two years ago, I would not have said that
Brunu on the Manchester United penalty talk: I don't care. Our attacking players are fast, it is normal that sometimes they earn a penalty
Source https://www.thesun.co.uk/news/13361527/rapper-casanova-wanted-fbi-eighteen-assailants-musician/