Who is Michelle White?

Donald Glover, 34, is an American actor and musician who has also been a successful director and producer during his glittering career so far.

Earlier this year, it was revealed that Donald is set 'to front new Disney+ Star Wars spin-off' as Lando Calrissian after his breakout role in the Han Solo movie.

The 36-year-old actor first played the role in Solo: A Star Wars Story in 2018 and now a podcast titled Kessel Run Transmissions has claimed Donald will reprise the role for a new TV series.

Under the name Childish Gambino, he is also a successful hip hop artist.

Not much else is publicly known about partner Michelle or her career.

How long has she been with Donald Glover?

It's unclear how long the two have been together, as the couple are notoriously private.

However, the rapper and actor has publicly declared his love for his partner on multiple occasions.

"I want to thank Michelle, my partner. You love me even with how crazy I get," Glover said on stage during his Emmy acceptance speech according to Cheatsheet.

Earlier in the year during his Golden Globes speech, he echoed the same sentiments, saying “I really want to say thank you to my son and the mother of my son for making me believe in people again and things being possible, so thank you."

When did she give birth?

Michelle gave birth around Memorial Day weekend in May.

Donald recently revealed to GQ that Michelle had given birth to their third child while speaking about George Floyd, the black man who died after a Minneapolis officer held his knee for eight minutes to his neck.

“I was in the hospital bed. My son had just been born, like, an hour before and I was watching the George Floyd video. It was such a weird moment,” Glover recalled. 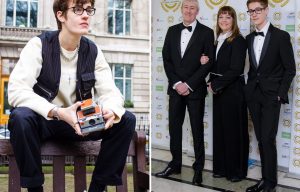 “It was such an intense, weird moment, because I’m watching that video and it’s like eight minutes long, so you’re sitting there and I had just had this amazing, joyful, expanding moment …”

Glover said he and White named their son after the star’s late father, Donald Glover, Sr.

“I don’t even know what, really, the word is to describe it,” he continued. “It was just expanding: the empathy and compassion and the terror and the joy of it.”

Ronaldo posted a video of himself running around in a Juve uniform and showed the goal celebration: Go, guys!
Carlo Ancelotti: Maradona is the best I've played against. I beat him like no other, he was unstoppable
Josep Bartomeu: my family and I were insulted, we received threats. This goes beyond all bounds
Professor of medicine Burioni: I Welcome Ronaldo to the ranks of virologists. In a match with optometrists, he will be very useful
Baresi became honorary Vice-President of Milan on the 23rd anniversary of the farewell match
Ronaldo called the PCR tests crap and then deleted the comment. I don't think I care about covid at all
Barcelona's presidential election will be held in 2021 (Marca)
Source https://www.thesun.co.uk/tvandshowbiz/12824629/donald-glover-michelle-white-childish-gambino-han-solo/