THE penny, or the once-cent coin, equals one one-hundredth of a US dollar.

Pennies are the lowest value currency since the half-cent was eradicated in 1857.

America’s 16th President, Abraham Lincoln is on the one-cent coin.

Lincoln’s emergence on the obverse side of the coin occurred in 1909, on what would have been his 100th birthday.

The reverse of the penny contains a banner with the word “one cent” across a shield.

The 13 vertical stripes on the shield represent the 13 colonies of the US.

The shield has a horizontal bar above inscribed with the national motto "E Pluribus Unum" ("out of many, one").

Why is Abraham Lincoln on the penny?

Lincoln was the first president to ever be featured in a US coin.

Lincoln was considered a champion of equality during his presidency.

Among his policies, he was best known for freeing the Southern slaves by signing the Emancipation Proclamation and preserving the union.

The penny with his face was designed by Victor David Brenner, a Lithuanian immigrant who had moved to America due to religious persecution.

50 years after Lincoln emerged on the coin, the Lincoln Memorial in Washington D.C. was added to the penny’s reverse, complete with a tiny representation of the statue within.

Are pennies made from copper?

Pennies were once made from copper, but due to a shortage of the metal during World War II, the Mint decided to make the 1943 penny in zinc-coated steel.

Copper was preserved for weapons for the war.

Due to the metal change, pennies or “steelies” were confused with dimes as they rusted and deteriorated quickly.

What other presidents are on US coins?

President Franklin D. Roosevelt replaced the image of Lady Liberty on the dime in 1946, the year after he died.

Similarly, Thomas Jefferson is on the nickel.

The first US President, George Washington, is on the quarter.

The US Mint first produced the Washington 25-cent coin in 1932, to commemorate the 200th anniversary of his birth.

President John F Kennedy is on the half-dollar. 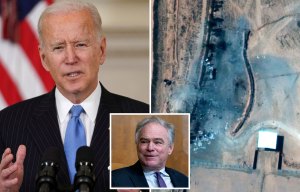 Immediately after his assassination, Mint Director Eva Adams spike with Chief Engraver Gilroy Roberts about depicting Kennedy on a coin.

His wife and First Lady Jacqueline Kennedy chose the half-dollar to memorialize her husband.

President Dwight D Eisenhower is on the one dollar coin.