When does hay fever season start in the UK and what is pollen count?

HAY FEVER sufferers, be prepared for a difficult few months as blazing temperatures this spring are expected to cause record-breaking pollen levels.

Three in ten Brits who get seasonal allergies are set to be hit hard when they leave the house, despite limited outdoors time due to the coronavirus lockdown.

But why is this year worse than normal? We explain all.

What is hay fever?

Hay fever is an allergic reaction to pollen, which can be released from a number of natural sources including trees or grass.

Symptoms normally occur when the pollen count is above 50.

Weather and biological factors can have an effect, but when it is warmer, allergies are typically stronger.

There is currently no cure for the condition, but many people are able to ease or control their symptoms with treatment.

You are typically more likely to get hay fever if it runs in your family, or if your family has a history of asthma or eczema.

Thankfully many people find their symptoms improve with age and can disappear completely in some cases.

You can check the pollen forecast for your area here.

When is hay fever season in the UK?

The NHS says hay fever is at its peak between late March and early September.

Its optimum conditions are warm, humid and windy.

This usually happens when rain is followed by warmer weather.

Dr Jean Emberlin, of Allergy UK, told The Sun Online: "The worst case scenario for hay fever sufferers is when you have rain occasionally, which keeps the grass going, and then days in between with warm weather which disperses the pollen.

"But if you have a very hot, dry summer the grass stops growing."

She estimates June will be a particularly bad month.

What is pollen count and when are the peak seasons?

Pollen is a fine powder released by plants as part of their pollination cycle.

The spores travel in the atmosphere in order for the plants to be grown elsewhere where the pollen lands.

Unfortunately, it contains a protein that can cause the nose, eyes, throat and sinuses to become swollen and irritated.

The pollen count is calculated by measuring the number of pollen grains in a cubic metre of air, using a pollen trap.

Pollen counts tend to be higher in early morning and late evening, although they can sometimes be high all day long.

The threshold for 'high' pollen count depends on the type of pollen, but usually hay fever symptoms begin when the pollen count is 50 grains per cubic metre of air.

But people's senstivity to specific pollen types can vary.

According to the Met Office, the pollen season can be separated into three sections, starting in March:

Why is hay fever so bad this year?

Experts expect a sharper, more condensed pollen season this year because of a cold spell in early April which delayed trees' pollen release.

Highs of 23 degrees predicted this week are expected to trigger the highest spring pollen levels since records began in 1951.

Tree pollen levels will hit hard this week for all of Britain bar Scotland and the far north of England, with the worst to come after the Easter weekend of April 11 and 12.

And grass pollen will “really kick off” in May and climax in June, industry leaders have said.

According to the New Scientist, plants need a period of cold then warm weather before they can flower.

But because of the long winter, plants that couldn't flower earlier in the spring are more likely to do so all at once.

This causes more pollen to be produced.

This boom in pollen particles could affect hay fever sufferers around the country, who will be at risk of streaming noses and runny eyes.

Allergy expert Max Wiseberg warned: “When the tree pollen season is delayed, more trees are likely to release their pollen at the same time, creating a time bomb waiting to explode.

“Peaks of tree pollen could be higher than normal." 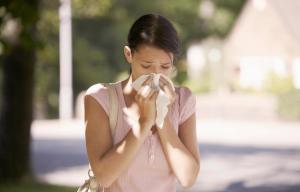 What is a pollen bomb and does it make hay fever symptoms worse? 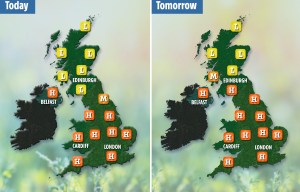 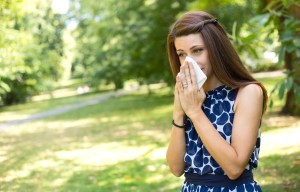 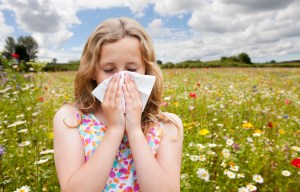 Can hay fever cause a sore throat? Here are the main symptoms

How can you prevent hay fever?

Symptoms can be alleviated by wearing wraparound sunglasses outdoors to prevent pollen from getting in your eyes.

The NHS also recommends showering after being outside to remove any pollen from your body and changing clothes, or try to avoid natural areas when the pollen count is high.

You can check today's count on the Met website.

Other tips include putting Vaseline around your nose to trap pollen and avoid hanging clothes out to dry.

And for those whose hay fever triggers asthma there's an alluring way you can reduce your symptoms – by simply swapping your pint of beer for a gin and tonic.

A large number of games play into the hands of Real Madrid. Their composition is better than that of Barca. Ex-Madrid player Pirri on the La Liga calendar
The referee in Latvia showed a black football player a red card and a FAK. This is a very awkward situation
Barcelona has launched the streaming service Barça TV+
In the network appeared pictures of the new guest form Arsenal. Its texture resembles marble
Luis Suarez: Coming back from an injury is always difficult, a little scary
Alexander Zinchenko: training In Manchester City is just murder. People are fighting for a place in the line-up
Antoine Griezmann: Winning La Liga and the Champions League with Barca is a dream. I would like to finish my career in the USA
Source https://www.thesun.co.uk/fabulous/5990374/uk-hay-fever-season-pollen-count/