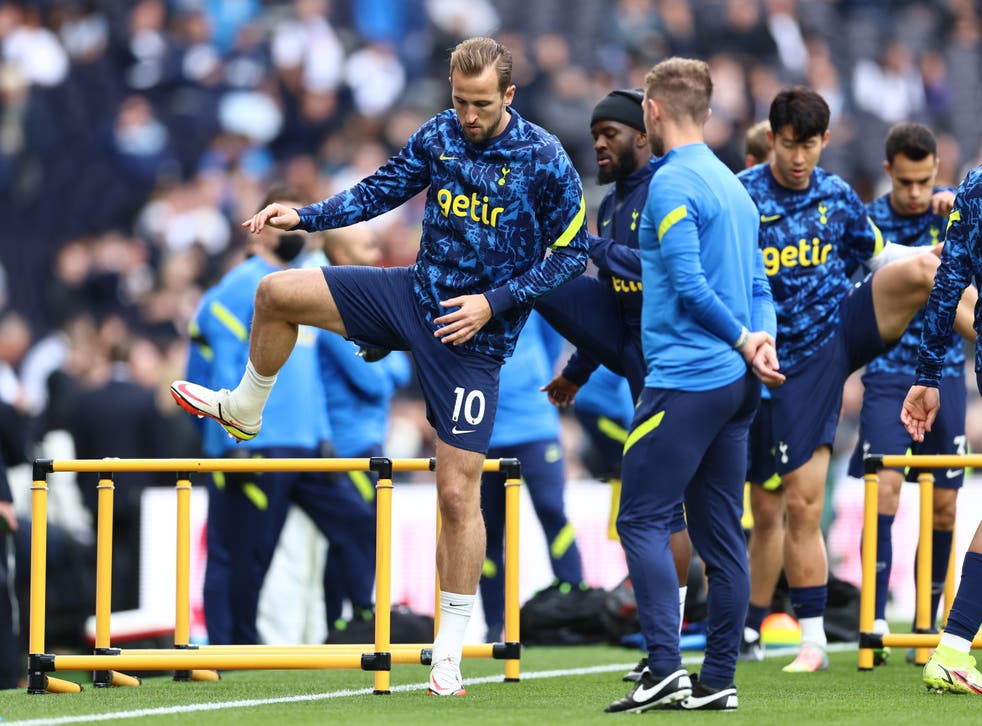 Harry Kane warms up before kick-off

West Ham are hosting Tottenham in the Premier League this afternoon, in a derby at the London Stadium between two clubs with their sights set on the top four. Fourth-placed Brighton’s defeat by Manchester City on Saturday means the winner of this game will leapfrog the Seagulls into the Champions League spots, and Spurs could even find themselves third in the league by the end of the day if Manchester United were to beat Liverpool at Old Trafford later.

Spurs have endured a topsy-turvy start to the season with three opening 1-0 wins followed by three defeats, but two back-to-back victories against Aston Villa and Newcastle have steadied the ship, the latter match also seeing Harry Kane finally get on the scoresheet this season in a boost for Nuno Espirito Santo.

The Hammers have been similarly inconsistent with wins on the road at Leeds and Everton held back by defeats at home to Manchester United and Brentford, and David Moyes’ side are still searching for a second Premier League win of the season at the London Stadium since the opening day thrashing of Leicester. Follow all the action below, live.

West Ham have lost 2-1 in their two most recent home league games, conceding the winning goal in the 89th minute versus Manchester United and the fourth minute of stoppage time against Brentford.

They have not suffered three consecutive top-flight defeats at the London Stadium since a four-match streak under Manuel Pellegrini between November and December 2019.

The standings: West Ham vs Tottenham

West Ham start today’s game sitting seventh in the league table taking on a Tottenham side two places above them. The Hammers have four wins from their opening eight matches but are looking for a second victory at home since demolishing Leicester 4-1 here back in August.

Tottenham’s form has fluctuated wildly this season but it looks as though they’re back in an upswing. Two wins from their last two games, including a comeback win against Newcastle last weekend sees them just outside the top four. Nuno’s men could end the day level on points with Liverpool if they beat West Ham and the Reds lose to Manchester United.

Bruno Fernandes and Fred are injury doubts for Sunday’s game according to Ole Gunnar Solskjaer and Marcus Rashford, who has scored two goals in two games since his return from injury, will be assessed before the game.

Anthony Martial has resumed training with the squad but Raphael Varane is not expected to be fit.

For Liverpool, Curtis Jones is back in training after missing two games with a groin issue but Thiago Alcantara is out as he continues his recovery from a calf problem.

Following the clash between West Ham and Tottenham at the London Stadium, Liverpool travel to Old Trafford where they’ll seek to increase the growing pressure on Manchester United boss, Ole Gunnar Solskjaer.

Despite the unrelenting pressure weighing down on his shoulders, there is a crumb of comfort for Solskjaer. Manchester United will end the weekend seven points behind Liverpool if they lose to their historic rivals on Sunday but, in the black and white of the record books, their manager is still keeping pace with the man who will be sitting in Old Trafford’s away dugout.

After 163 games in charge, Solskjaer has won 91, drawn 34 and lost 38. At the same stage of his Anfield career, Jurgen Klopp had won 88, drawn 44 and lost 31. If all those games were league matches played with three points for a win, Solskjaer would have 307 points and Klopp would only be ahead by the smallest of margins on 308. The similarities do not end there, either.

West Ham could avoid defeat in three consecutive league games versus Spurs for the first time since May 2006.

However, Tottenham have won three of their last four Premier League fixtures at the London Stadium despite losing there last season.

David Moyes makes six changes to the Hammers’ starting XI that took on Genk on Thursday night. Lukasz Fabianski replaces Alphonse Areola in goal with Angelo Ogbonna and Kurt Zouma returning at centre-back and Said Benrahma, Pablo Fornals and Michail Antonio back in the forward line.

As expected Spurs are unchanged from the team that lined up against Newcastle last weekend which means all 11 players that stayed behind as Tottenham travelled to Vitesse in midweek come back into the team.

Kick off at the London Stadium is an hour away and the team news is out. Here’s how West Ham and Tottenham both line-up:

West Ham’s Declan Rice expects a feisty game when his side come up against Tottenham later today and says the aim for the Hammers is to give everything to win the game. He said:

It’ll be feisty, lots of tackles, a good atmosphere and two teams that want to win and we’ll be ready and will go out there and give it everything to win the game,

“Our target as a team is to do as well as we did last year. We want to push on and do better. We’ve started well in the Europa League, so we really want to carry that on and do well in that, as well as all the other competitions we’re in.”

The late kick off today sees Manchester United host Liverpool. It’s a classic fixture in the English top-flight and will have ramifications at the top of the Premier League table.

Liverpool will move back to second place, just one point behind leaders Chelsea, if they win at Old Trafford whilst defeat would see Man Utd eight points adrift. Ole Gunnar Solskjaer’s side really need to pick up three points if they want to remain in contention with the league leaders.

West Ham demolished Genk 3-0 on Thursday night to continue their winning start in the Europa League. That victory was their second in a row after they squeezed past Everton 1-0 last time out in the Premier League. The Hammers will be confident of getting a result against Spurs today with three points enough to take them into the top four.

Tottenham’s defeat to Vitesse last time out was their first loss in four games since a 3-1 defeat to Arsenal in the Premier League. Nuno Espirito Santo left his first choice starting XI at home for the Europa League so they should be fully rested for today’s game, If they win Tottenham will become the first team to start a Premier League season with three consecutive wins, followed by three losses, followed again by another three wins.