THE start of the triathlon was delayed after a BOAT dangerously steered into the path of athletes about to jump into the water.

Day three of the 2020 Tokyo Olympics commenced in farcical fashion with a false start in the endurance event. 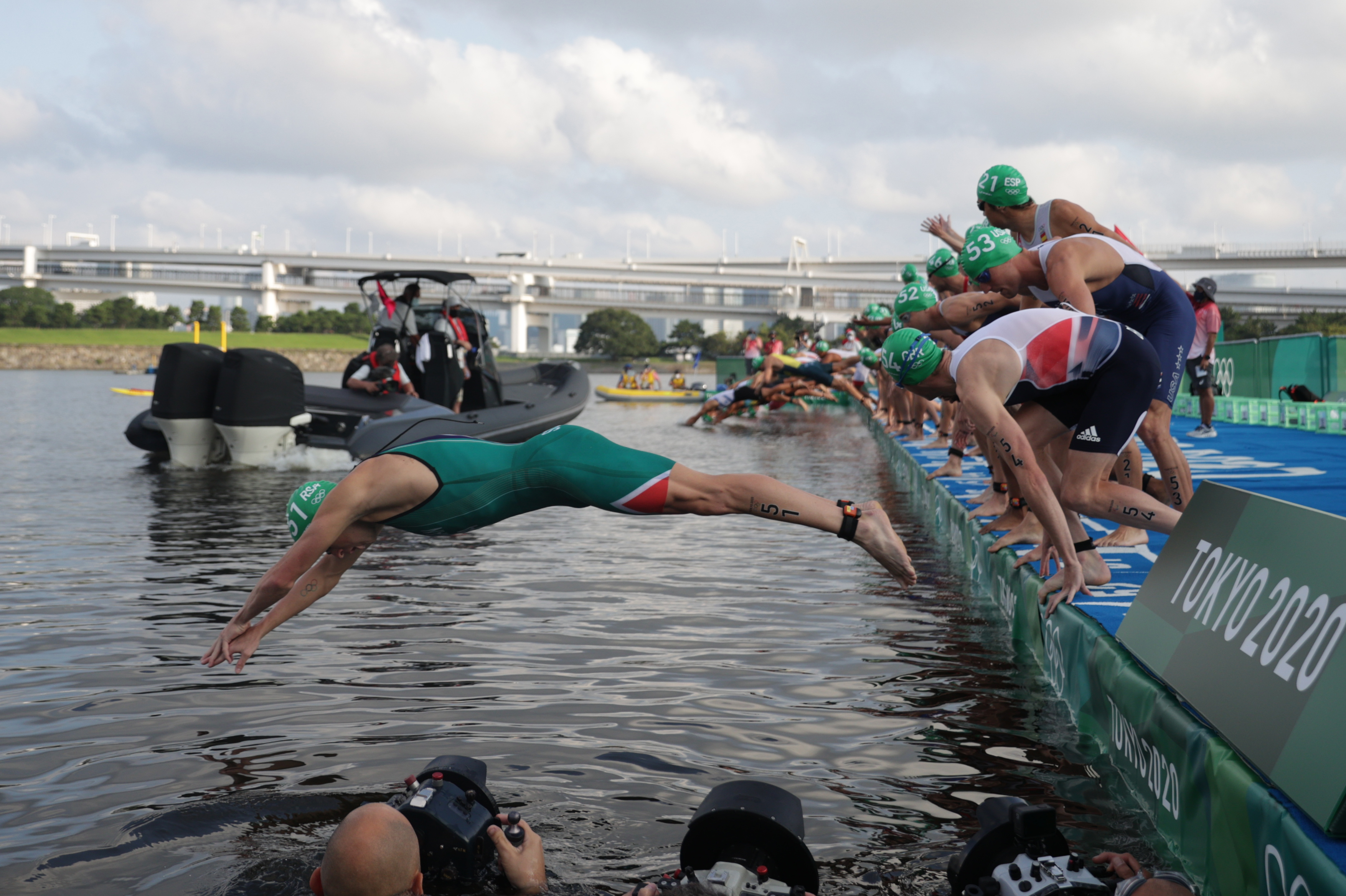 A boat was in the way of athletes as they dived into the water in shocking scenesCredit: Reuters 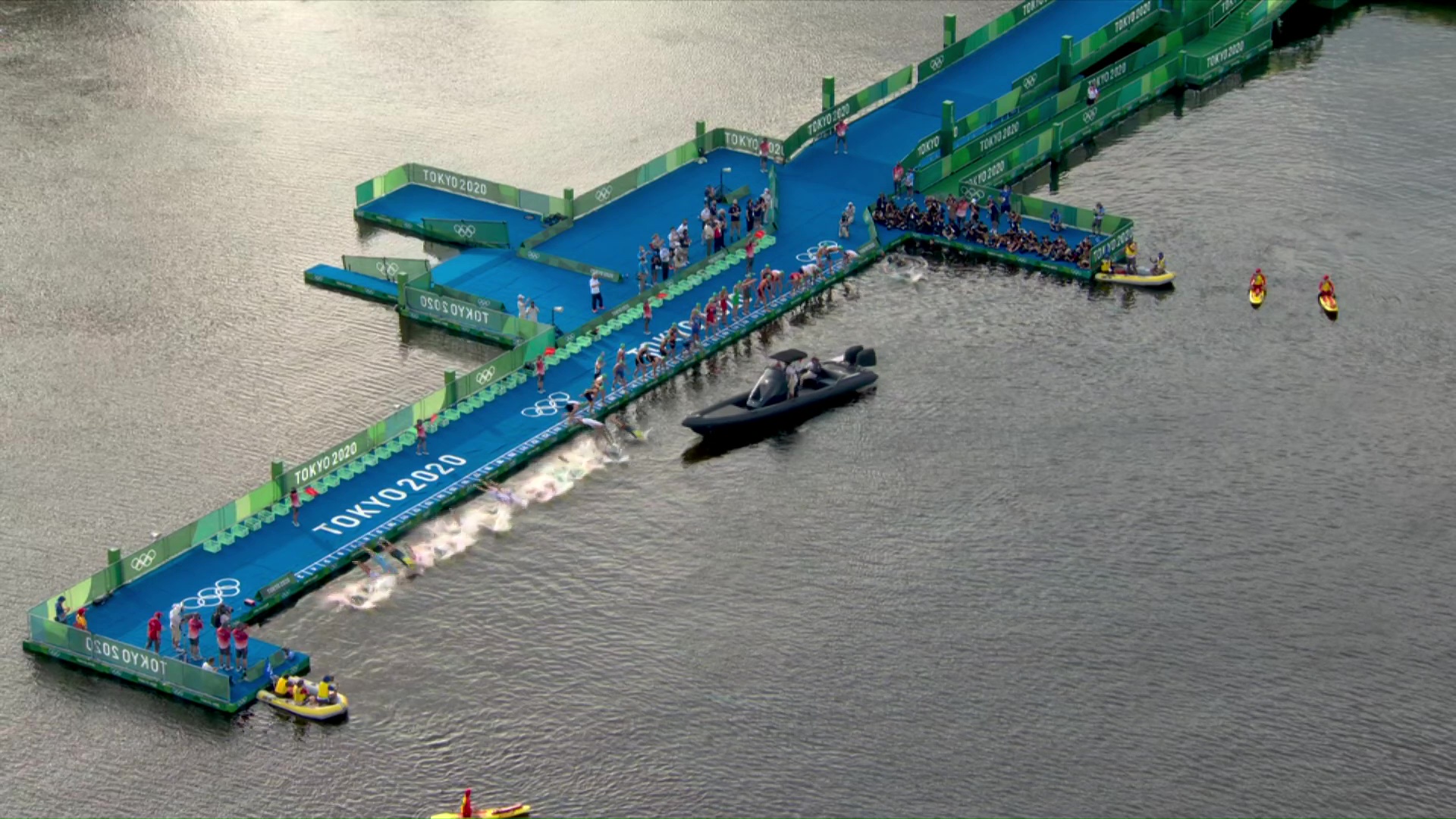 This was the shocking incident that saw the triathlon off to a false startCredit: BBC 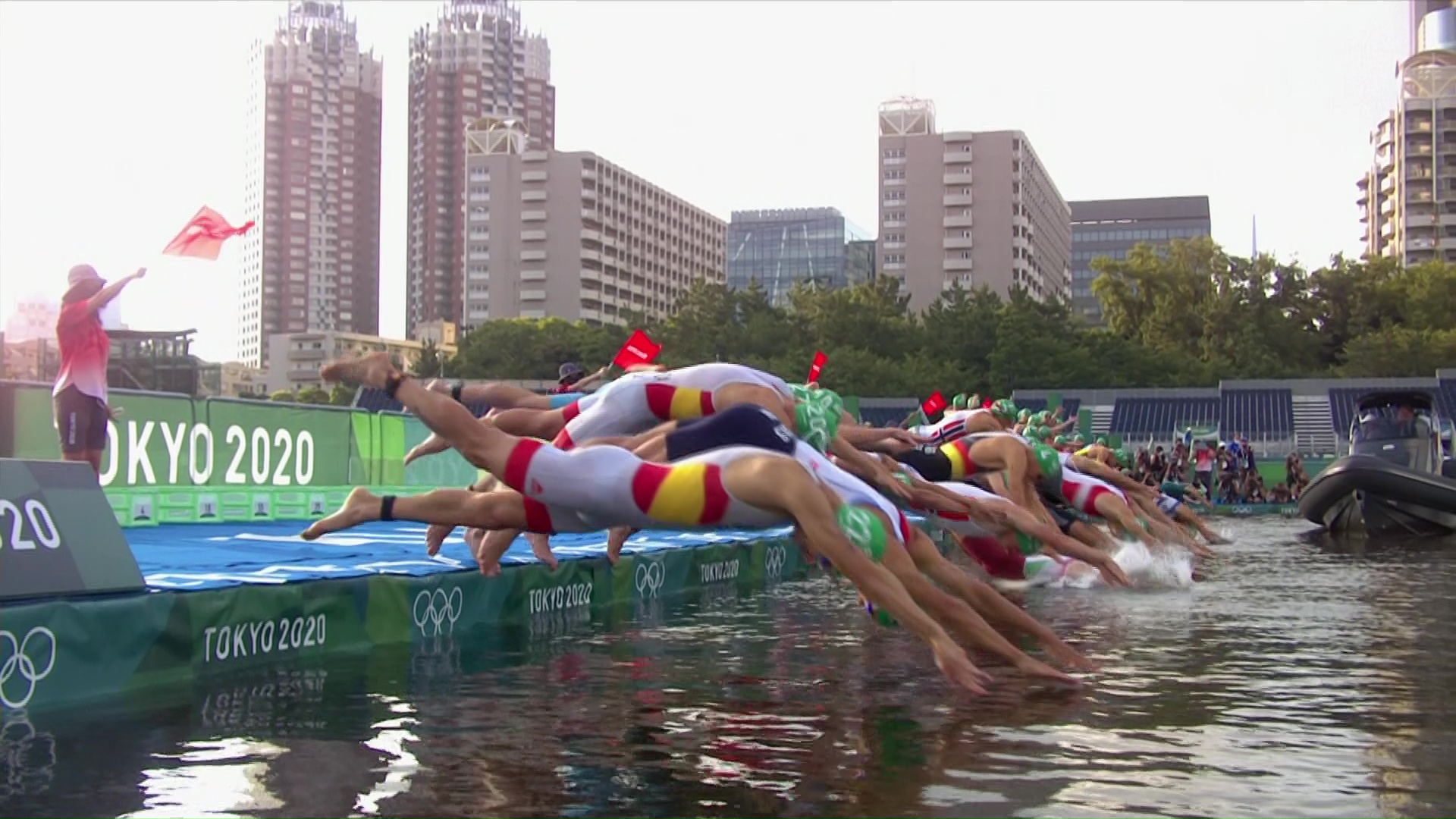 The BBC commentator was seething at what he had witnessedCredit: BBC

It was eventually won by Norwegian Kristian Blummenfelt and saw a brilliant silver from Team GB's Alex Yee - but got off to a shocking start at the Odaiba Marine Park.

This time, though, only half of the athletes could jump into the water for the 1.5km swim, with a RIB boat block the other half's entry.

BBC commentator Matt Chilton was raging at what he had seen.

He said: "I have never seen anything like that before at the start of a triathlon - let alone one at the Olympics. What a shambles."

In the studio was GB triathlete Non Stanford.

She added: "I've never seen that - definitely not in the Olympics.

"Hopefully the guys who did jump in, it didn't affect their race too much."

And that was the reaction of stunned viewers on social media.

🥇 TOKYO OLYMPICS LIVE: All the latest from the Games with our live blog

🥇 WHAT'S ON TODAY? Best bits to watch at the Olympics and UK times for your favourite stars

Laura Barr tweeted that it was 'absolutely chaos' and 'bloody ridiculous' what happened.

Charlie Pittock echoed Chilton's comments, posting that it was a 'shambles of a start to the triathlon'.

Jane Bourne commented that 'heads should roll' for the 'terrifying' incident.

She added that 'it’s a minor miracle that everyone’s actually alive and well'. 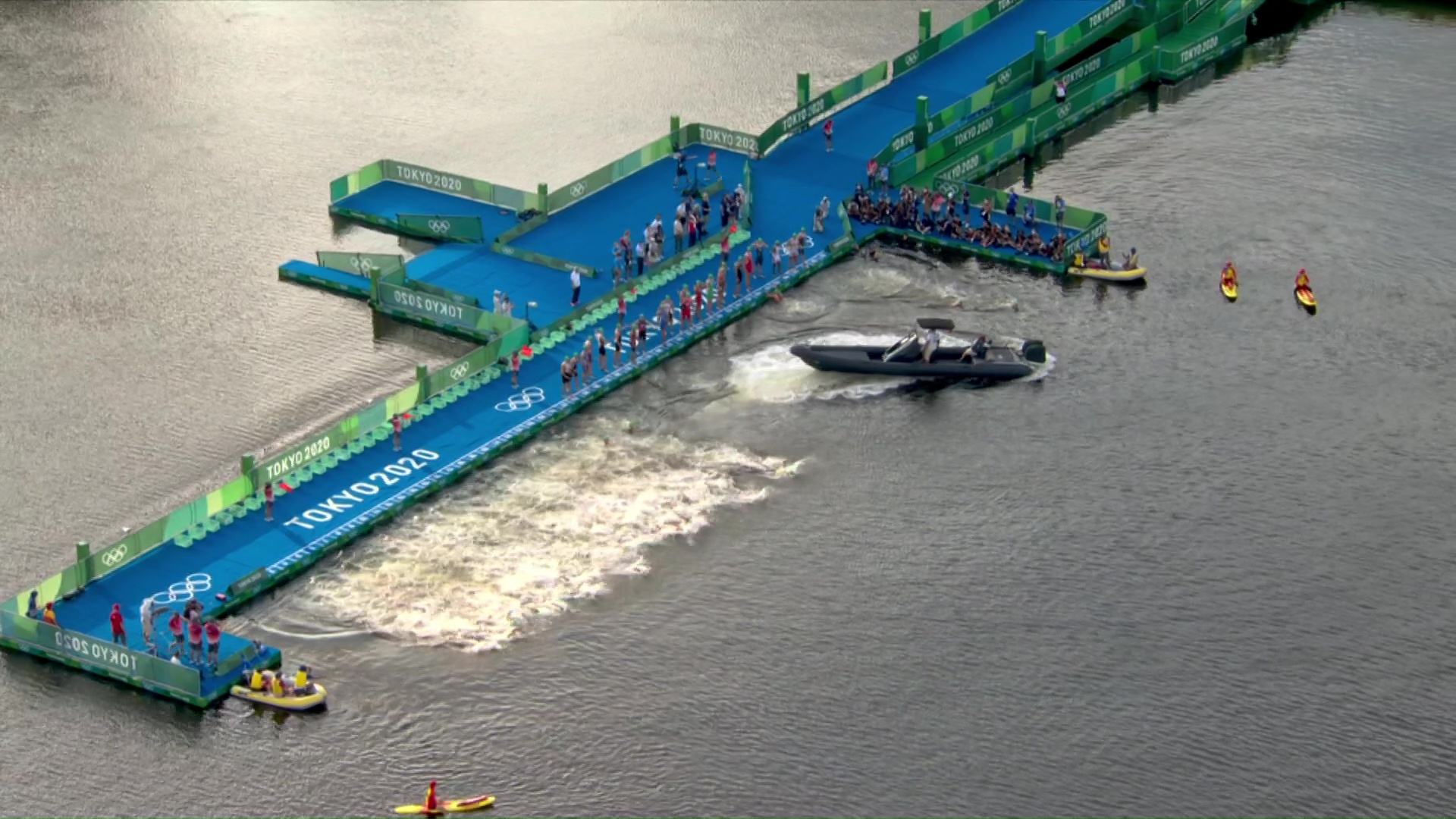 The triathlon got off to the worst possible startCredit: BBC 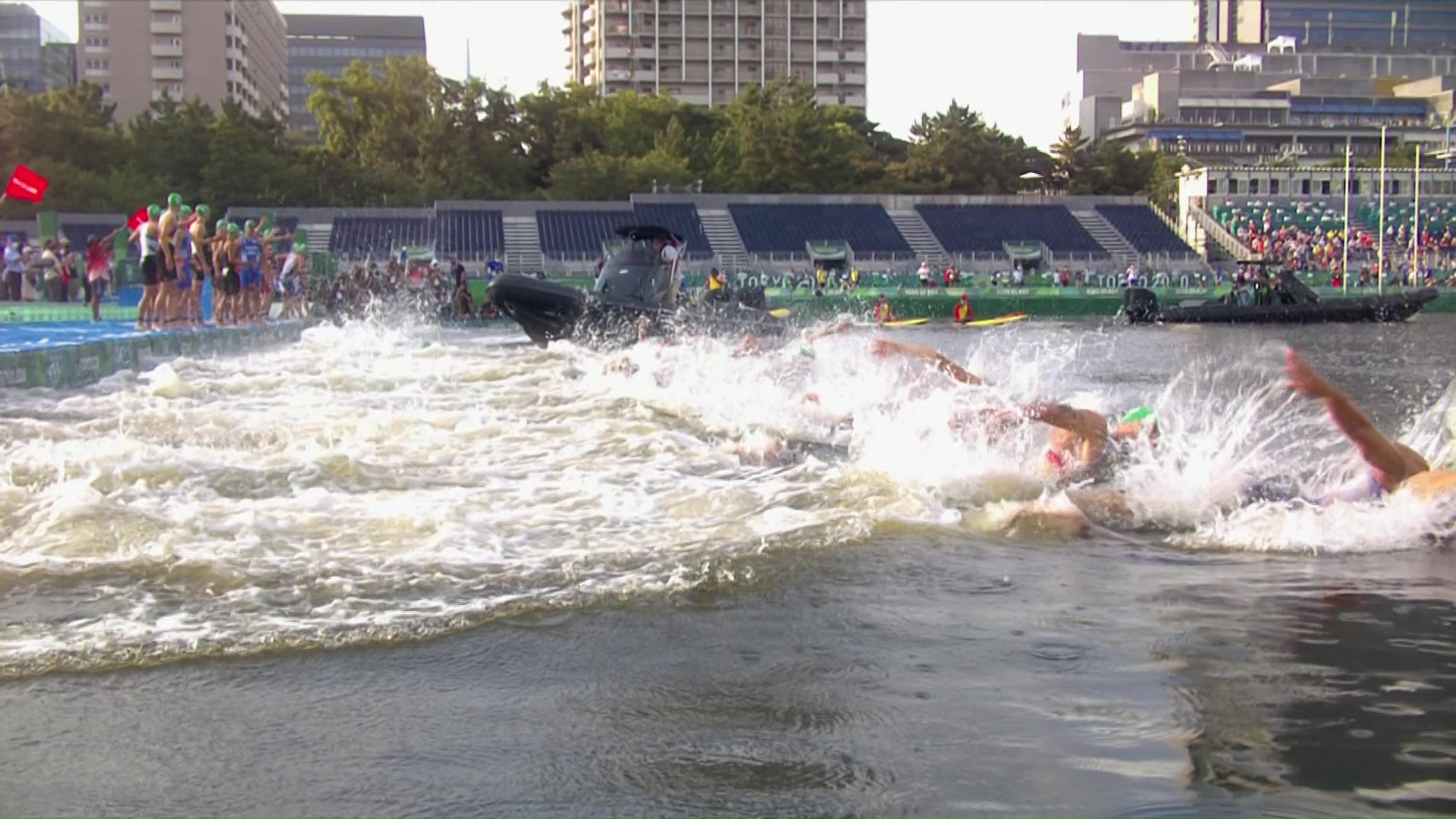 Many athletes were left stood on the platform with a boat in the wayCredit: BBC

Yves Saint Laurent to stop use of fur by 2022

New head of Time's Up pledges openness after Cuomo scandal

Teachers can suffer with maths anxiety as well as pupils, says expert

Gabby Petito sent a message in ‘morbid’ knife emoji Instagram post where she wished to be in North Carolina, sleuths say

Who is Tom Ballard’s sister Kate?

Petrol panic as huge queues line up at Scots pumps

'That's quite strong!' Sophie Wessex caught by surprise as she samples whisky

ADVERTORIAL: 'We all deserve a certain minimum' - teacher reveals sad incident that opened her eyes to hygiene poverty

Why are Apple and Fortnite fighting? Tech firms locked in legal battle

Climate strikes: Why are young people across the world taking to the streets?

Boy, three, died after being run over on farm as he was playing with his sister and cousin

Shoppers should brace for price rises of five per cent, warns retail expert

I love ISAWITFIRST's work attire for every occasion

Traffic delays and huge queues as people rush to get petrol

ADVERTORIAL: 4 top tips from Merian Odesho on how to detangle your hair and reduce breakage

Cannabis farm discovered after fire breaks out at house in Whitefield

Olivia Fowler missing: Family beg for help as mom last seen on a walk over a month ago and misses child’s birthday

Who are the Big Six energy suppliers?

Mars 'too small' for extraterrestrial life with 'fate decided from beginning'

What TV channel is the Ryder Cup on? Live scores, UK timings and BBC highlights

Brexit: Sign up to The Independent’s virtual event exploring the hidden costs of leaving the EU