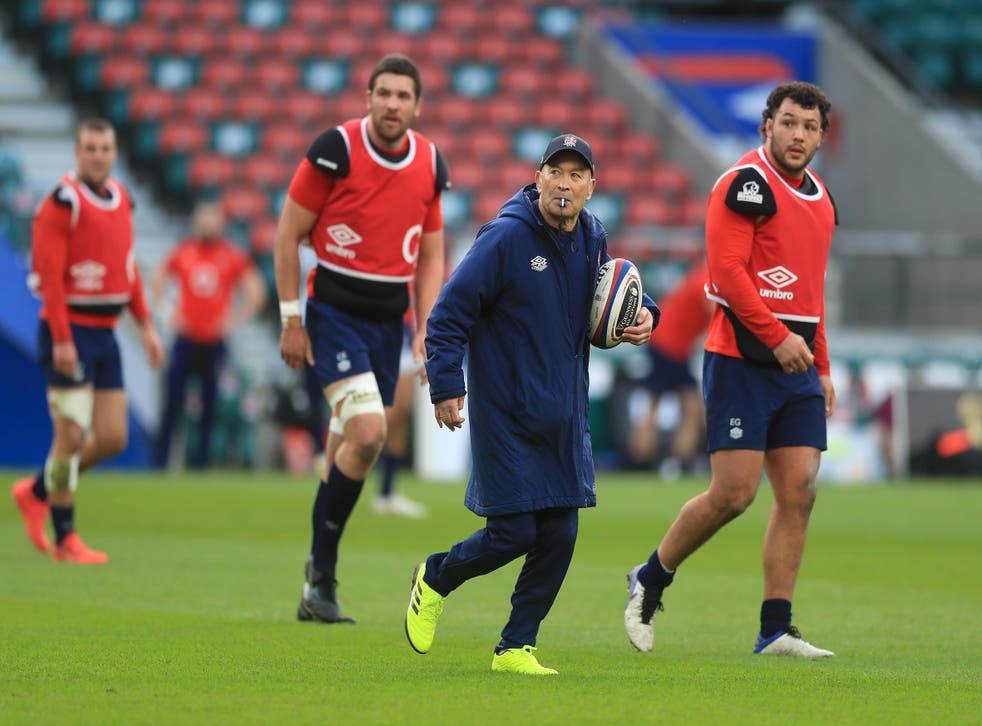 Eddie Jones looks on during an England rugby training session

Wales assistant coach Neil Jenkins has pinpointed his side’s discipline as the key to winning amid an “edge” and “confrontation” between the sides, but Eddie Jones maintains his side are cautious about the potential for Alun Wyn Jones to wind up his players: "At times, he (Alun Wyn Jones) has targeted players in our team. We've spoken about him and we understand what he will be trying to do. It's just about making sure we maintain our composure and our control."

But Jenkins has denied that would be the case: "I don't think so. The game is the game. Things are going to happen, people get on edge, there are going to be confrontations. That's the reality. There is going to be edge tomorrow, there is no doubting that, but the reality is we have got to keep our discipline as well, keep 15 players on the pitch, back our systems and not give England easy ins. I have no doubt there are going to be some altercations, but let's hope they are disciplined ones and it's not on our side, anyway. You have got to have a disciplined edge. Any Wales-England game is huge. It's what it is all about. It's a game like no other."

Rugby coverage is brought to you in association with QBE who help businesses build resilience through risk management and insurance. For more information go to QBEEUROPE.com

A final coat of gloss from Keith Earls! Italy are flagging, badly, as Jack Conan thumps against a wall showing clear fissures. Quick ball for Craig Casey, quick transfer to Johnny Sexton and a flat fired pass across the face of the defence to free Earls, who catches, canters and calmly puts it down in the corner.

Sexton completes a perfect day from the tee, and sends us to a close.

Ireland draw a penalty but are in no mood to dilly-dally, Craig Casey taking the quick tap, and then again as Italy agaibn draw the referee’s whistle.

Italy kick possession back to Ireland, who reply in kind as the game rather drifts towards it conclusion.

That’s more ambitious from Italy as they try to go wide on the edge of their own 22, but Mattia Bellini’s pass is incredibly inaccurate - five yards forward, and out of play. Ireland will have what might well be a final attack.

The bounce of a rugby ball! Paolo Garbisi dabs a little grubber beyond the Irish line for Maxime Mbanda, on in the back row, to hare after. Hugo Keenan is deceived by the wild hop of the ovoid, and his attempts to retrieve it only see it bounce more and more errantly.

It appears destined for Italian hands but a final unpredictable bounce means claiming it is not a simple task, and one not performed effectively. A chance for a second consolation goes a-begging.

Fine pilfering work from Jack Conan to snatch the ball back Ireland’s way on the right and there is space for James Lowe on the left as Johnny Sexton and Billy Burns combine to free their winger. Lowe fends and fends and fends as Paolo Garbisi tries to close the final metre to him, eventually managing to duck past the left winger’s right hand and grab him round the quads, and Lowe is forced into touch.

He’d just managed to toss the ball back infield, actually, before it deflected out off an Italian arm. Irish lineout, which comes to nothing, and Italy clear to near halfway, now restored to a full complement.

Ireland are trying to set a midfield scrum but much like it did in Italy’s last outing against England, the set-up descends into a little bit of shouting and pushing as the two sets of eight peacock and prance before packing down again.

Italy earn a free kick as Ireland put too much weight on too early.

Ireland are trying to set a midfield scrum but much like it did in Italy’s last outing against England, the set-up descends into a little bit of shouting and pushing as the two sets of eight peacock and prance before packing down again.

Italy earn a free kick as Ireland put too much weight on too early.

Ireland win the scrum penalty, so will have another chance at a score as they kick to the corner. Billy Burns is on for Robbie Henshaw.

Another maul misfire, however, with Mathieu Raynal very hot on those lifters moving beyond the jumper before he comes down. It is understood that that was a fallow week directive from the Six Nations officiating bosses, and he’s picked up on it thrice this afternoon. Italy clear, and are back to 14 men with their captain left lonely in the sin-bin.

Ireland look to have scored another try as James Lowe finds a great Roman aqueduct throw which he can make safe flowing passage to the line, but Craig Casey’s sharp pass to channel him in the right direction is deemed to have travelled forward. That looks a touch harsh, I have to say, and it’s a shame, for that was another lovely Ireland score with Casey and fellow debutant Ryan Baird both prominent.

Two forwards down, Italy have little hope at quelling the Irish drive. Craig Casey flirts with the idea of a try on debut as he looks to wrench the ball from his forwards’ hands, but Will Connors is in no mood to give up a potential second score, letting the mass of his mates take the maul over the line and flopping down wants it has reached a destination that looked inevitable the moment the lineout throw found Irish hands.

The conversion goes over and Ireland are past 40.