VICKY Pattison has revealed her unhealthy obsession with food drove her to 'exercise like a nutcase' to be a size six.

However, Vicky has since she revealed on a number of occasions how unhappy she was at that time in her life.

And in her latest podcast, she revealed the full extent of her unhealthy obsession with food and exercise.

She said: "When I did my fitness DVD I had such an unhealthy obsession with a number on a scale. I wanted to be the skinniest I could.

"I remember being in a size 6 from River Island. And there is no problem with that. There are loads of petite women out there. But I am not one of them. I am not a naturally petite woman. I am curvy. I really am.

"I love that now. But it has taken until 33 to say that. And to own that and to mean it. To really mean it."

Vicky continued: "I got this unhealthy fixation with being as small as I could.

"I remember putting on this size 6 River Island skirt and telling all of my friends quite proudly that it was too big. That is what I considered to be success.

"It was none of the things exercise should help you strive for. It was an unhealthy obsession."

Vicky added there wasn't one particular moment where she 'broke that cycle', it was more of a gradual realisation of what she was missing out on.

She said: "I realised I could be as skinny as I wanted. The number could be as low as I liked on the scale but actually I was still not going to be happy. 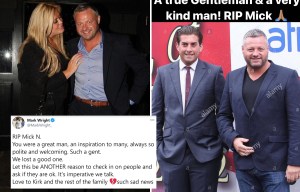 "I wasn’t having nice meals out with my friends. I was constantly wracked with anxiety about everything I was putting in my mouth. I was exercising like a nutcase even so I could enjoy even small things guilt-free.

"It was horrible. I would not wish that mindset on anyone."

She continued: "I was like: I love my body. If anyone asked us: ‘I am really happy with where I am’ but deep down I would be riddled with self-doubt and insecurity.

"I’d be still depriving myself. I’d still be exercising like an absolute nutcase because I allowed myself some hummus."

Vicky Pattison The Secret To…podcast is available on Apple and Google Play.