An uninspiring stalemate between the United States and Australia ensured the former progressed to the knockout stages and the latter will probably join them.

With Sweden topping the group after a 2-0 win over New Zealand, the result means the two sides finish on four points but the US take second place with a superior goal difference. Provided Japan, China and Zambia do not all win on Tuesday, the Matildas will go through as one of two best third-placed teams.

The performance of the World Cup-winning US women’s team was far from a vintage one. In the first half it was hard to deduce whether they were happy to sit back and let Australia dominate and probe while they bided their time or whether they just could not play through the attacking 3-4-3 the Australia’s head coach, Tony Gustavsson, had chosen.

There was aloofness to the US play and weirdly, despite nine of the starting XI having played in the World Cup final together, the team looked disjointed. An all-action performance from the defensive midfielder Julie Ertz (who did not start in the defeat by Sweden) was critical to keeping the Australia forwards at bay early on. 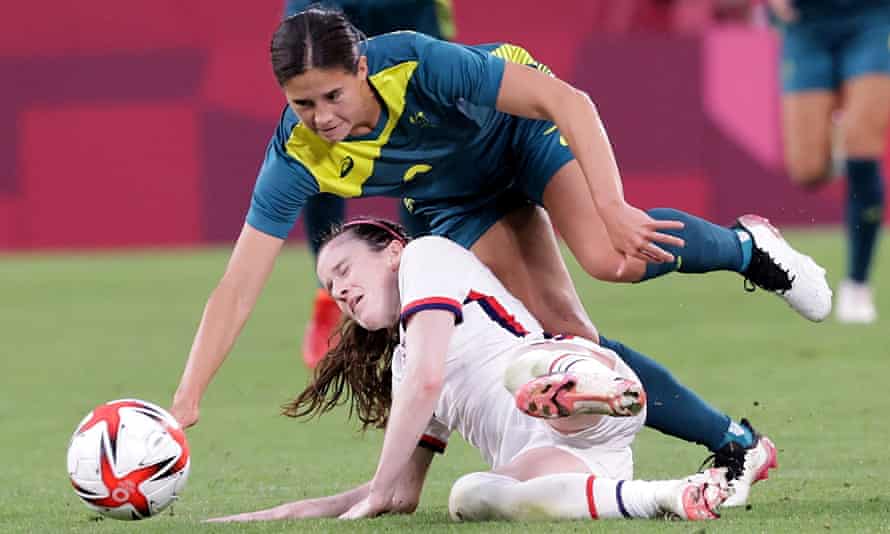 With the wind whipping around the east-coast Kashima Stadium, the world champions looked far from infallible. The 3-0 opening defeat by their old foes Sweden was may still be tender. Yes, the 6-1 victory over New Zealand had exorcised frustrations but Australia are ranked ninth in the world and a much more potent force. Perhaps that defeat did not knock the confidence of the US but instead gave the other 11 teams a smell of US blood.

As the clock ticked towards half-time the Matildas’ profligacy looked as if it could prove costly. The 18-year-old forward Mary Fowler – a last-minute addition to the lineup in place of Arsenal’s Caitlin Foord – went closest 18 minutes in with a header that ricocheted back off the underside of the crossbar after a long throw from Ellie Carpenter was flicked on by Alanna Kennedy.

Sign up for our Tokyo 2020 briefing with all the news, views and previews for the Olympic and Paralympic Games

In front of the stand of socially distanced local schoolchildren who had signs and would politely clap any chance – a welcome sight given the absence of fans – Alex Morgan was twice flagged offside, once with the ball in the net. Later, a trio of US attackers were offside as the lack of cohesion grew starker.

The US manager, Vlatko Andonovski, seemed rattled after the Sweden defeat and, although the US progressed, concerns will be growing about a strategy that has left the players looking lost when things are not going their way.