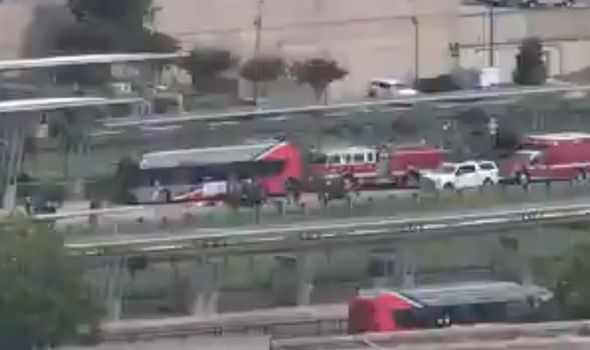 Pentagon on lockdown following a shooting (Image: NC)
Sign up to receive our rundown of the day's top stories direct to your inbox

According to reports, two people have received CPR and several others have been hurt following a shooting on a metro bus platform outside the building. One officer has reportedly been shot. All personnel have been told to remain inside.

An emergency announcement said: "All personnel stay inside.

"Due to police activity outside, all personnel remain outside.”

According to CNN, the event occurred outside the building on the Metro Bus platform.

It is a major entrance to the Pentagon used by thousands of personnel every day entering and leaving the building.

The Pentagon currently is on lock down due to an incident at the Pentagon Transit Center. We are asking the public to please avoid the area. More information will be forthcoming.

The Pentagon Force Protection Agency tweeted: "The Pentagon currently is on lock down due to an incident at the Pentagon Transit Center.

"We are asking the public to please avoid the area.

"More information will be forthcoming."

Metro trains are bypassing the Pentagon station during the investigation.

Metrorail Info tweeted: "Blue/Yellow Line Alert: Trains are temporarily bypassing Pentagon due to a police investigation outside the station at Pentagon.

The Pentagon is the headquarters building of the United States Department of Defense.

As a symbol of the US military, the phrase The Pentagon is also often used as a metonym or synecdoche for the Department of Defense and its leadership.

Alex Ferguson: Ronaldo dreamed of Real Madrid. This is the only club where world-class players appear from year to year
The 60-year-old vice-president of Suriname played for his club in the CONCACAF League and distributed money to rival players. He was suspended from football for 3 years
Luc de Jong scored the first goal for Barca in the 4th game - with Levante
Aston Villa goalkeeper Martinez offered Bruno to concede a penalty to Ronaldo and danced after a miss by the Manchester United midfielder
English football is getting closer to banning bookmakers: the names will be removed from T-shirts, even billboards and TV commercials are questionable
Dybala and Morata will not play with Chelsea. We hope they will return after the matches of the national teams. Allegri about injuries
Messi and Verratti work in a common group before the PSG match with Man City