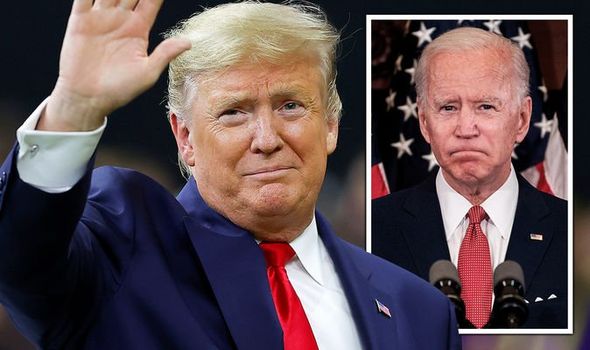 US election 2020: Donald Trump on course for victory despite protests (Image: Getty)
Sign up for FREE now and never miss the top politics stories again.

The US President has been under fierce attack this week after his decision to deploy the National Guard to deal with protesters after some of them became violent.

But according to an exclusive poll carried out by the Democracy Institute in America, President Trump is still one point ahead of his Democrat rival, the former Vice President Joe Biden by 48 percent to 47 percent with 5 percent undecided.

Crucially though Mr Trump is six points ahead in the swing states of Florida, Iowa, Michigan, Minnesota, Pennsylvania and Wisconsin by 50 percent to 44 percent.

Based on these results the President would see off his rival in the electoral college by 293 votes to 245 with Trump picking up Minnesota where George Floyd was killed and the Democrat stronghold of New Hampshire but losing Michigan and Wisconsin.

In a week where he has faced intense scrutiny and criticism the shock poll suggests that voters in the US approve of the way he has handled the crisis by 56 percent to 40 percent.

In a week where violent protests have damaged many people’s businesses, property and lives, Trump’s decision to call Antifa protest group “terrorists” got a 56 percent approval rating while the same number think Biden has not been strong enough in condemning violence.

And with Democrat administrations in US states and cities threatening to defund the police, 73 percent said they were opposed to the move.

A White House source told the Sunday Express that public criticism of the President had been unfair and he wanted to see justice for George Floyd. 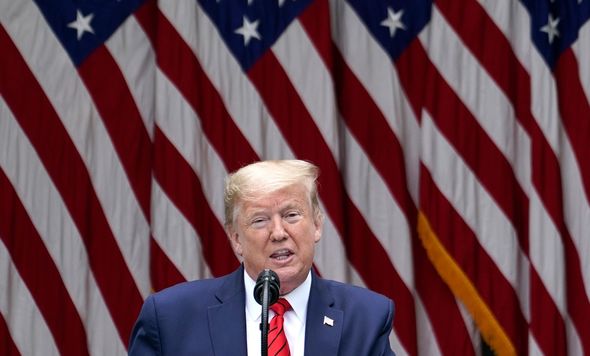 President Trump is still one point ahead of his Democrat rival, the former Vice President Joe Biden (Image: Getty)

The source said: "There is no one who supported the policeman’s actions. No one. There is no one defending it. So the protestors have no one to be against. Peaceful protest is always welcome. The looting and devastation is not. By any community. But I’m not sure who they are protesting against since no one is on the other side of this argument."

However, the President does not score well on his handling of coronavirus with 44 percent disapproval to 40 percent approval after he pushed for a quick ending of lockdown measures.

However, 60 percent said he was not indirectly responsible for 100,000 coronavirus deaths in America.

The racial split in his support shows that 59 percent of white voters back him but surprisingly he also has the support of 40 percent of black voters which is historically high for a Republican candidate. 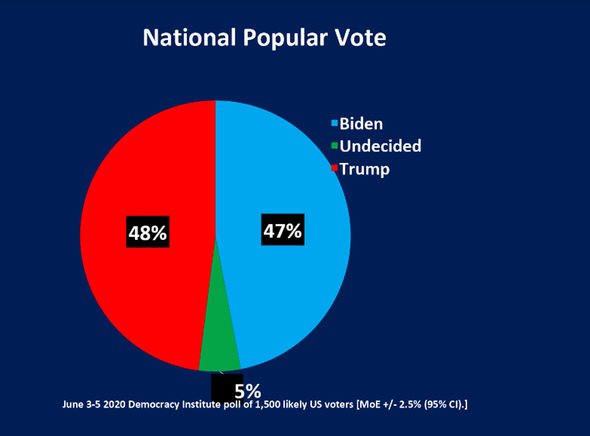 However, only 37 percent of Trump voters would want their friends and family to know how they had voted while 74 percent of Biden supporters are comfortable with it being known, suggesting there is a “silent vote” for the President.

While 71 percent describe Trump as a strong leader and 70 percent a populist, 59 percent think Biden is the best consensus leader and 57 percent say he is the establishment politician.

But while 62 percent say Biden is the more likeable politician and would be better to have a beer with, 53 percent think he is too old.

Notably 27 percent would not want either politician to babysit their children.

Should government prioritise law & order on city streets or prioritise improving relations between Black Americans and the police?

Do you support de-funding your local police department?

Will Trump or Biden do a better job of standing up to China? 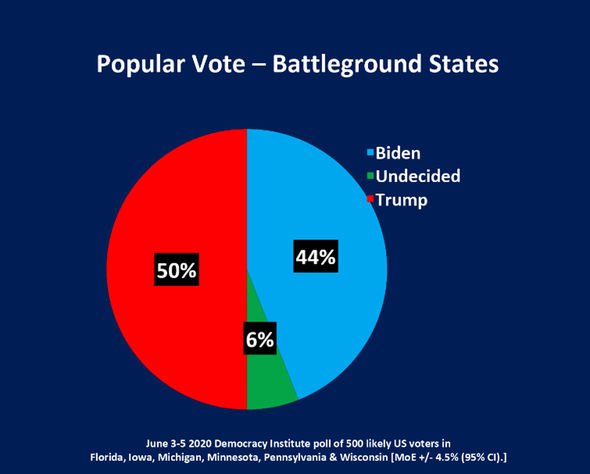 Will there be a significant economic recovery this year?

Is the UK this country’s most reliable ally?

What is your opinion of British Prime Minister Boris Johnson?

Will Brexit be good or bad for the UK?

Would a UK-US trade deal be a good or a bad idea?

The fieldwork for this survey of a randomly selected national telephone (landline and cell) sample of 1,500 likely voters was conducted by the Democracy Institute’s polling unit from June 3rd to June 5th 2020. The survey was conducted via interactive voice response, in which recorded questions were played for randomly-dialled respondents and answers were given via their telephone keypads. The poll has a margin of error of +/- 2.5 percent at a 95 percent confidence interval. To ensure a representative sample, the results were weighted for key demographic and political variables including, but not limited to, party identification, gender, age, education, income, region, voting history, and cell phone-only households. The party identification turnout model is: Democrats = 38 percent; Republicans = 38 percent; and Independents = 24 percent.

Barcelona will lose 100 million euros due to the coronavirus. The club expected to make 200 million euros in profit
Police have opened a case against Ronaldo's 10-year-old son. He was self-driving a jet ski (The Sun)
Lampard on the cancellation of city's ban: I Never hoped that an extra team would get into the Champions League
Thibaut Courtois: to take the title, you have to suffer. It is not easy to win every match
Antonio Conte: I will not hesitate before leaving if Inter are not happy with what I am doing
Diego Godin: Inter will do everything to keep second place. Now we need to think about how to catch up with Juventus
Harry Maguire: Manchester United want to fight for trophies
Source https://www.express.co.uk/news/politics/1292288/US-election-2020-donald-trump-poll-results-democracy-institute-of-america?utm_source=feedburner&utm_medium=feed&utm_campaign=Feed%3A+daily-express-news-showbiz+%28Express+%3A%3A+News+%2F+Showbiz+Feed%29

Face coverings to be made compulsory in shops in England

Court ruling bans landlords from saying 'no DSS' as discrimination

Beans could be an option for frustrated oilseed rape growers