An Australian cruise company is working to disembark a stricken Antarctic cruise ship on which around 60% of the passengers and crew have been infected with coronavirus.

The Greg Mortimer has been anchored 20km off the coast of Uruguay since 27 March, but authorities in the South American country had until now refused to allow passengers to disembark.

On Tuesday, the ship’s operator, Aurora Expeditions said that of 132 passengers and 85 crew, 128 people had tested positive for Covid-19. Most on board are understood to be Australian, although there are also citizens of New Zealand, the US and the UK.

“We found a ship where almost everyone has been infected,” said Karina Rando, one of 21 Uruguayan doctors dispatched to the ship. “We’ve done our utmost to prevent our own infection. Most of the passengers are well.”

Many of those who tested positive are still asymptomatic, but could still be at risk, said Rando.

“There are many patients over 70 years of age, some of them with other chronic conditions such as heart and lung diseases,” she said. “Those patients may fall seriously ill tomorrow even if they looked well today.”

The $65m ship set out on 15 March from the Argentinian port of Ushuaia, the southernmost city in the world. It was to have undertaken a 16-day cruise to Antarctica and South Georgia, christened “In Shackleton’s Footsteps” after the British polar explorer.

Symptoms of coronavirus started to appear soon after departure, and the ship diverted to the Uruguayan capital Montevideo. Even the ship’s doctor fell ill with a fever and was left unable to perform his duties.

“We have made it clear that the ill health and the isolation of the crew is making it difficult to maintain the same standard of essential services onboard,” Aurora Expeditions told passengers on 2nd of April.

Uruguay denied permission for the ship to dock, and also refused to allow passengers or crew to disembark.

That decision was eventually reversed at the weekend, when a Uruguayan naval vessel was dispatched to the Greg Mortimer to remove six gravely ill passengers and take them to the British Hospital in Montevideo.

On Saturday the Uruguayan navy tweeted a video of a passenger – reportedly a British woman with pneumonia in both lungs – leaping from the moving cruise ship to the military vessel to be taken to hospital in the Uruguayan capital. 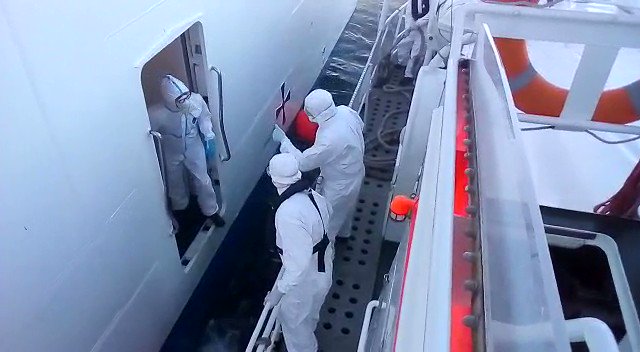 “The people on the ship are calm but they are eager to go home,” Marcelo Girard, a doctor at a Uruguayan medical facility where two people from the cruise ship are being treated, told the AP.

Passengers from Australia and New Zealand will board an emergency flight bound for Melbourne on Thursday, Uruguayan authorities confirmed on Tuesday afternoon.

The cost per passenger is about $9,300 and the cruise ship operator has asked the Australian government for help with expenses. On landing, the passengers will undergo a mandatory 14-day quarantine.

Other passengers will have to wait longer. “We have been advised that European and American passengers that have tested positive to Covid-19, unfortunately must wait until they have a negative test result after which we will be able to organise their departure via Sao Paulo and then to their final destination,” the company said.

Uruguay has 406 confirmed cases of coronavirus and six deaths.

Nikita Kashaev: When Swedes learn about the statistics of coronavirus in Russia, their eyes pop out
Besiktas players got down on one knee, forming the initials of George Floyd
RB Leipzig considers Rasetsu as a replacement for Werner
Director of Bayer: the Future of Havertz has not yet been determined
Arsenal is ready to pay 25 million euros for 19-year-old Feyenoord midfielder Kekcu
Real were denied the transfer of Havertz for 80 million euros. Bayer wants 100 million (Bild)
Balotelli on skipping training: I'm still sick
Source https://www.theguardian.com/world/2020/apr/07/uruguay-to-repatriate-australian-passengers-from-covid-19-stricken-ship