A celery plant leans nonchalantly against a wall, long limbs rising to a tousled leafy head. A red onion gleams like an ancient bronze orb. Peas are black pearls in their casket pods and four Ailsa Craig onions, arranged in a basket, resemble Russian minarets: a quartet of spires pointing up to the heavens.

These astonishing photographs are the work of the English gardener Charles Jones. Nobody knows exactly when they were taken, though probably in the 1890s when he was head gardener at Ote Hall in Sussex. Jones would scratch the glass plates clean after the printing process for reuse, like the practical gardener he was. Some of his plates even ended up as cloches for seedlings. 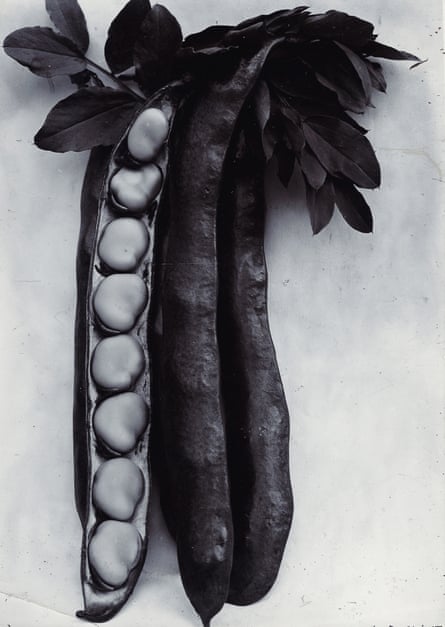 His gifts as a gardener are fully apparent in his art, with its exceptional sensitivity to sculptural form and composition, silver light and burning dark. But uppermost is Jones’s eye for the singularity of every treasured specimen. It is no overstatement to describe his photographs as character portraits.

Jones is only one revelation among many in a magnificent show opening at Dulwich Picture Gallery on 8 December. Unearthed traces the history of photography from the 1840s to the present day through images of botany and plants. It features Victorian calotypes of ghostly dahlias and pale roses captured via primitive camera obscura. It has fin-de-siècle morning glory, glowing mauve on Japanese lantern slides, and X-rays of narcissi by the pioneering radiographer Albert G Richards.

The latest art includes the video triptychs of Israeli artist Ori Gersht, in which vases of flowers appear to be paintings, then mirrors, real then false, before exploding. And the seductive yet disturbing LCD projections of Mat Collishaw, in which lilies seem to be catching fire in churches.

Photography’s first subject was the object – what else could sit so still? Early exposure times were around 40 minutes. Many of the first pictures were therefore still lifes: vegetables, flowers or fruit. Some were arranged to resemble the fictions of Dutch flower painting, even to the extent of trying to assemble cultivars from different seasons in one vase. Others show fruit piled high, and reflected in shining vessels, like old master art.

In England, the phantom bouquet fad – in which leaves and blossoms were stripped to their skeletal outlines with sulphur – made early photographs look like drawings. Even a Victorian botanist such as Cecilia Glaisher, bent on recording all the different species of fern she could find, complete with trailing roots and clods of earth, makes sublime arrangements of black on white. Laid down in two dimensions, a fern becomes its own diagram: a perfect drawing of itself.

The French photographer Adolphe Braun’s wonderful flower studies may look remarkably like the paintings of Henri Fantin-Latour, but Braun came first. And look at what he made without a colour palette. Braun’s photograph of pansies, c1850, somehow manages to evoke subtle shades of mauve and gold in its monochrome tones. Black and white photography was colour-blind in those days, registering blue as white, yellow as grey and red as black shadow. But Braun used gold-toned salted paper, varnished to enhance the depth of shadow, and worked with the finest adjustments of lighting to achieve his effects. His flowers appear both ancient and yet still miraculously modern. 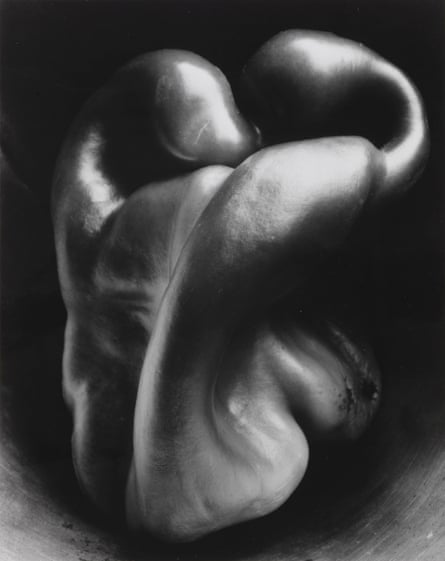 The Dulwich show amounts to a political history of photography by other means. Should it aspire to nothing more than the fictions of painting? Should it be a catalogue, a document, a celebration of the natural life? Where Glaisher records the precise difference between two varieties of fern, Jones observes the Sputnik-like eccentricity of a plucked turnip. Where Imogen Cunningham sees the perfect abstraction of a calla lily, Edward Weston anthropomorphises a pepper, so that it momentarily resembles the torso of a body-builder.

Who invented photography? The evergreen question is reprised at Dulwich Picture Gallery in botanical images. Before Louis Daguerre’s 1839 invention of the daguerreotype came Fox Talbot with his photogenic drawings, represented here with a posy of ethereal primroses in a dreamy teacup. But before Fox Talbot, some argue, came Thomas Wedgwood, son of the potter, who coated paper with silver nitrate to capture silhouettes of plants. In 2008, what appeared to be his sole surviving image – of a leaf – came to light. But it was soon reattributed by an expert to the English artist Sarah Anne Bright, now considered the first woman to take a photograph.

The scientist Sir John Herschel invents the cyanotype in 1842, using Prussian blue ink (an effective method for reproducing architectural drawings, hence the term “blueprint”). But the cyanotype is more associated with the botanist-photographer Anna Atkins. Laying a strand of seaweed on sensitised paper, Atkins let the light do the rest: the seaweed against the aqueous blue is like a strange new creature in the ocean. 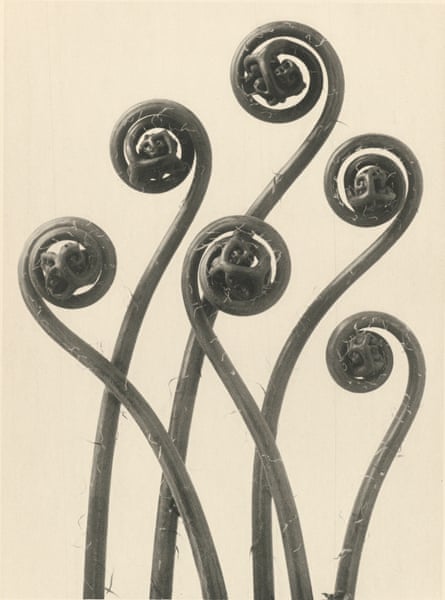 Atkins was intent on creating “sharp and well-defined” images of algae specimens. Her Photographs of British Algae became the first book to be published with photographic illustrations. Many early photographers were scientists, botanists or gardeners by profession, but artists by nature.

Most great photographers of the past two centuries have taken still lifes of flowers, fruit or vegetables at some stage. This show will be full of classic images, but also of unexpected or lesser-known works. Among the most original are the photographs of the 19th-century German artist Karl Blossfeldt, whose apprenticeship at a local ironworks seems to have drawn him to discover all sorts of wrought-iron forms in plant tendrils, stems and blossoms. He found the pure geometry in weeds, the stark sharpness of thorns, the stiff lantern in the head of a dying campanula.

Even a war artist such as Roger Fenton, who recorded the devastations of Crimea, turned to roses and grapes in later life. Perhaps the desire to photograph the vegetable world brings its own peace, as well as the infinite possibility of experimentation without the interference of humanity, accident, sound or movement. But perhaps it also has something to do with the profound connection between photography and photosynthesis. The very light that gives life to a rose, before its petals drop, is the same light that preserves it in a death-defying photograph.

Bayern will play Egypt's Al-Ahly or Qatar's Al-Duhail in the Club World Cup semi-finals
Villalibre about delaying time by Athletic: Barcelona is worth a billion euros, and we wanted to win the Super Cup at the cost of our lives
Andrea Pirlo: Juventus want to win a tenth league title. Now is a difficult moment, but the ambitions remain the same
Dynamo crossed the medical examination and Cyberpunk 2077: they decorated the hospital with graphics and stuffed everything with Easter eggs
Joan Laporta: If Messi wants to gain experience in football in America, it will be useful for everyone
Ter Stegen and the Barcelona defenders have filed complaints against Griezmann for commenting on a poor defensive performance after the Super Cup (Cadena SER)
PSG can buy Barca defender Emerson for 25 million euros
Source https://www.theguardian.com/artanddesign/2020/nov/29/unearthed-photographys-roots-review-dulwich-picture-gallery-charles-jones