The footage shows the Ukraine drone, armed with powerful explosives, locating a Russian tank sitting immobile by a crossroads. The kamikaze drone, so-called due to its self-sacrificing role, flies from a distance towards the enemy vehicle. It hits the tank directly, killing what appears to be Russian soldiers working on top of the vehicle.

Melissa Bell, CNN’s Kyiv correspondent, said: “Extraordinary footage that was posted by the Ukrainian army in a Facebook post.

“It shows what looks like a kamikaze drone hitting a Russian tank. Now just a bit of background on some of those kamikaze drones.

“We know that the United States has provided 100 switchblade drones to the Ukrainian armed forces.

“The advantage they have tactically on the field, as a result, is that they can be fired from a distance, so from about 25 miles. 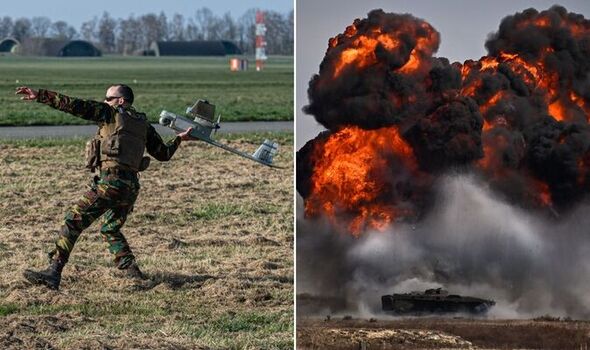 Ukraine use a kamikaze drone to destroy a Russian tank in the east (Image: GETTY ) 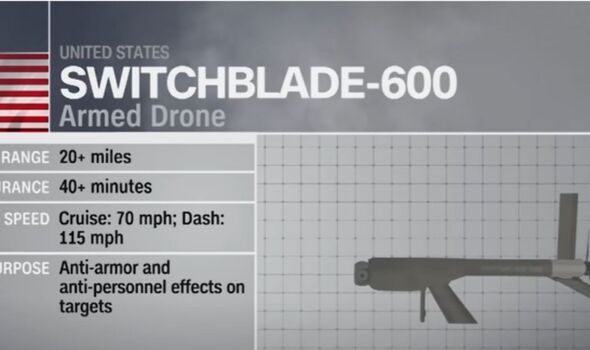 Kamikaze drones boast a 25-mile range and have given the upper hand to Ukraine (Image: CNN )

“This means their use gives an asymmetrical advantage to Ukrainian forces as they try to target tank and artillery positions on the Russian side.

“This is the first confirmed use of a kamikaze drone and we’re trying to get more information on whether it was one of those drones donated by the US.

“But just extraordinary pictures in the meantime showing just that high tech weaponry being used on the battlefield with all the potential advantages it might mean for Ukraine’s fight.” 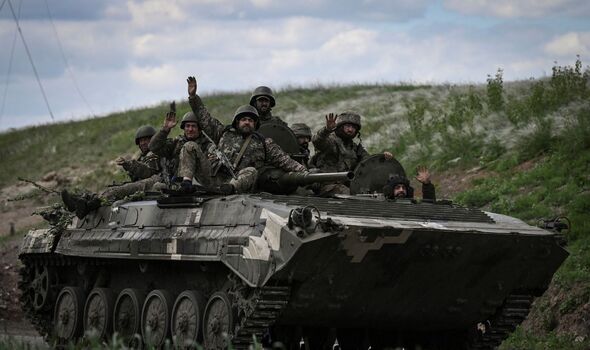 Ukrainian servicemen wave as they head toward the frontline near the city of Lysychansk (Image: GETTY ) 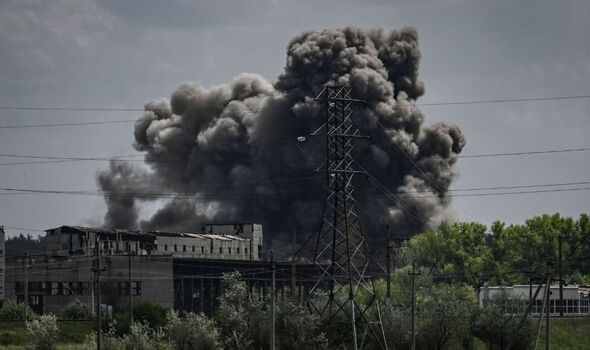 A factory in the city of Soledar at the eastern Ukranian region of Donbas is hit by Russian strikes (Image: GETTY )

After failing to seize Kyiv or Ukraine's second city Kharkiv, Russia is trying to take the rest of the separatist-claimed Donbas' two provinces, Donetsk and Luhansk, and trap Ukrainian forces in a pocket on the main eastern front.

In the easternmost part of the Ukrainian-held Donbas pocket, the city of Severodonetsk on the east bank of the Seversky Donets River and its twin Lysychansk, on the west bank, have become a pivotal battlefield.

Russian forces were reportedly advancing from three directions to encircle them. 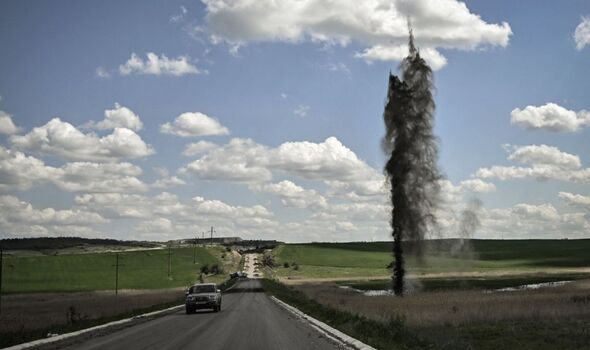 A mortar explodes next to the road leading to the city of Lysychansk in the eastern Ukranian region (Image: GETTY )

President Volodymyr Zelensky's office said the Russians launched an offensive on Severodonetsk early today and the town was under constant fire from mortars.

Luhansk regional governor Serhiy Gaidai said six civilians were killed and at least eight wounded, most near bomb shelters, in the city.

Mr Gaidai said: "At the moment, with the support of artillery, the Russian occupiers are attacking Severodonetsk.”

Britain's longest-serving post office, which began when the Beatles first retired above the charts

Kardashian fans praise Kim for "keeping calm" after being "ridiculed" in a "rude" and "insulting" re-emergence interview.

Ukrainian refugees whose partners left their wives say, "I didn't steal anyone."

Concerns that India is Russia's oil "back door" to Europe

Erik Ten Hag has a transfer budget of just £ 100m to rebuild Manchester United's team, causing a big headache to his boss on the first day

England vs New Zealand Live: Cricket scores and updates from the third test where England appears to skit the black cap

How Caffeine Addiction Affects Your Health and How to Reduce It

Gareth Bale's LAFC transfer is perfect for 19 local golf courses as well as Welsh people ahead of the World Cup.

Britain's worst towns for period poverty revealed, including cities where almost half of women struggle to protect

Thomas Tuchel, who discussed the transfer to Chelsea, revealed his feelings for Cristiano Ronaldo.